How Oloye OBAFEMI OLOPADE Was Buried In ABEOKUTA 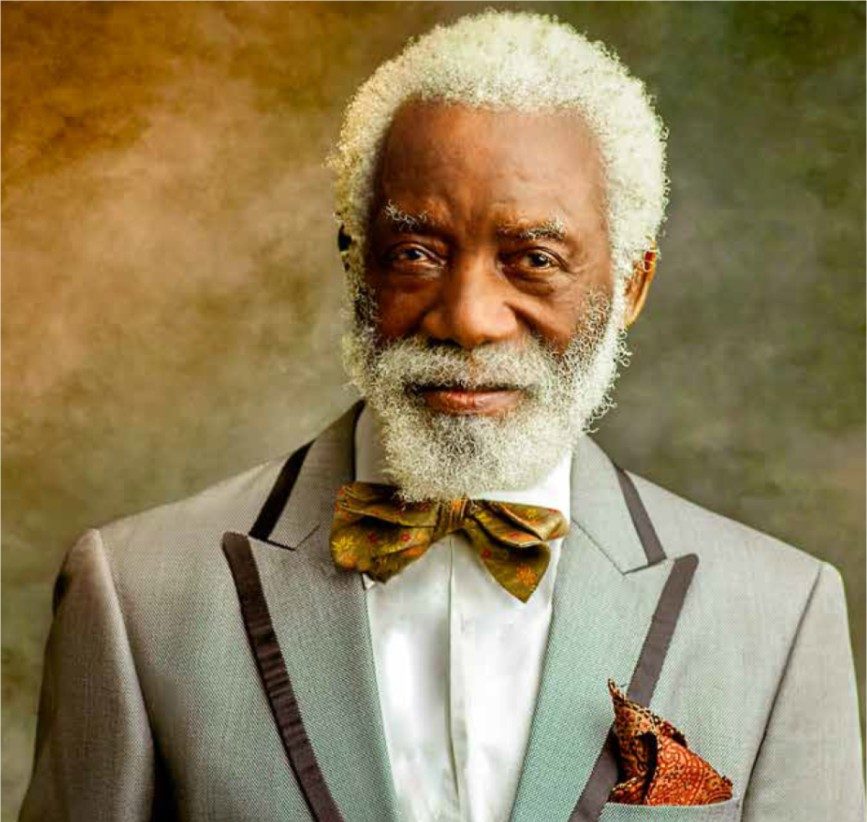 In his lifetime, Oloye Jonathan Adio Obafemi Olopade (OFR) was a great man. He was what many referred to as a distinguished Nigerian. He was also a respected Egba High Chief. He was the Otun Maiyegun of Egbaland. He passed on to greater glory on 10th September 2021. He was buried on Saturday, 18th September 2021 at private interment at his family house in Abeokuta after a funeral service at the Chapel of Christ The Glorious King, Oke Mosan, Abeokuta.

And the reception was held at The Olusegun Obasanjo Presidential Library, Abeokuta. A thanksgiving reception followed the next day, Sunday, 19th September 2021 at Harbour Point, in Victoria Island, Lagos. She was survived by Chief Mrs. Fehintola Uzoamuka Dorca’s Obafemi Olopade, Children and grandchildren.

Let’s tell you about this accomplished  Nigerian who always looked dignified. Jonathan Adio Obafemi Olopade was born on the 31st of July, 1926 to Pa. Jacob Ali-Balogun Olopade from Ake in Abeokuta, Ogun State and Madam Adeline Aina Thomas Ige-George of Balogun Square (Ita Balogun) from Lagos. At that time, both his parents lived and worked in Port Harcourt, having moved there in 1921.

Pa Jacob Olopade first worked with a German Company based in Port Harcourt, before he started his own business in the early 20s and 30s, buying palm products and exporting it to Europe. Later on, he set up a bus, taxi and motor transport business plying Port Harcourt and Onitsha, before he entered the timber business in the early 40s. His late mother Madame Adeline was a businesswoman who purchased chinaware in Lagos and sold them in Port Harcourt while purchasing kola nut and honey for sale in Lagos.

There were five males and five females in the family. Pa Jacob was a polygamist, a very good Methodist and a local preacher, who did not see anything wrong having more than one wife, under one roof. His children grew up along with other cousins and relatives in the same house. He insisted that all his wards grew up as Methodist, although Obafemi’s elder brother became a Roman Catholic. Pa Jacob gave all his children the best education he could afford, at the primary, secondary and higher education levels. Jonathan Adio Obafemi Olopade attended St. Cyprian Elementary School, which is an Anglican Communion Church School and he proceeded to Kalabari National College, Buguma, for his Secondary education. On completion of his secondary education, his father secured employment for him with an Italian construction company owned by his old friend, Mr. G.G. Dolcino, who came to Nigeria in the ’20s from Torino, Italy. The name of the company was Dolcino and Michelle and he worked in the drawing office of this company as a draughtsman. However, as government jobs were the rave in those days, he decided to quit the Italian company and look for a job with the government. He was very lucky to be offered an appointment as a Sub Inspector of Lands. The Land and Development office was under the Resident’s Office in Port Harcourt. Jonathan was about 21 years old at that time and worked in the Civil Service for about four years.

The young Obafemi, like many ambitious young men of his time decided to go in search of the Golden Fleece in the United Kingdom. He left Nigeria for the UK in 1955. While in the UK, aside from his studies, he was very active in two other areas, namely politics and religion. On arrival in London, he stayed at the Methodist International House, Inverness Terrace, London W2, in a very Christian fellowship atmosphere. He later moved to Brighton to study Structural Engineering and sang in the choir at Wesley Church Dome Mission, Brighton. In Politics, he was very involved in student union activism and became the first Black President of Hammersmith College Students Union.

During his student days in the United Kingdom, he was the Business Manager of “The Beacon”, a publication of the Nigerian Union of Great Britain and Ireland, he later became the National Treasurer of the Union.

He also served as Vice President, West African Student’s Union (founded in 1925), he was Secretary to the Movement for Colonial Freedom in the United Kingdom and a member of the working committee of the Anti-apartheid Movement in the United Kingdom. During the period he travelled a lot, visiting countries like Holland, Russia, Hungary, East Germany, West Germany and the United States of America. His trip to the USA, at the time, was with a selected group of Engineers from developing countries sponsored by the State Department and USIS. There were only two Africans in the delegation, one Mr. Thomas from Sierra Leone and Obafemi, himself from Nigeria. During the trip, they visited the Golden Gate Bridge in San Francisco, California, Tucson in Arizona, Mexico, Puerto Rico and the State Department.

Still, while in the UK, Obafemi met a lot of interesting personages of the time such as Jomo Kenyatta, Tom Mboya, Martin Luther King Jr, the young Andy Young, Sir Tafawa Balewa, Aja Nwachukwu and many others. With the assistance of Ambassador Mike Pistor of the USIS London Office, he and his colleagues in the Nigeria Union of Great Britain and Ireland organized a successful lecture for late Martin Luther King Jr., with Andy Young in attendance. In addition to all these his church and political activities, he also led a very active social life, attending Ball Room dances at the Regent Ball Room Hall, Brighton where there were a lot of foreign students and lots of girls from Western Europe living in the Brighton area, Worthing, Hove and towns in Sussex. Obafemi, at the time, enjoyed rock and roll music, jiving and “meeting girls”.

After graduation, having secured his diploma in structural engineering, he worked with one of the four largest consulting engineering companies at the time, Messrs G. Maunsell and Partners, as a junior trainee engineer. Obafemi bought his first car, a Volkswagen “the people’s car” during this period. Then the call to return home became too strong for him to ignore, because he had an aged mother and also being the last son. He returned to Nigeria in 1967, not long after the first Nigerian military coup. He took up employment with Messrs Whessoe Engineering of Darlington, England as a sales and design engineer. He went through a short period of training before being posted to their construction company based in Port Harcourt. During this period, he had the responsibility of visiting all the Ministries of Works in most State Capitals, such as Ibadan, Enugu, Lagos and Kaduna and scout for contracts to build storage tanks, both surface and underground primarily for the major Oil Companies. Such contracts included some of the Steel Structures and large storage tanks at the Afam Power Station in Rivers State and Ughelli Power Station, in Delta State.

Not long after, the Nigerian civil war broke out and non-Easterners were asked to leave the region. He returned to the UK via Lagos and resumed with his former employers Messrs G. Maunsell and Partners. Two years later he was back in Nigeria, hoping to work in the structural engineering department of the Nigerian Railway Corporation (NRC) as a Federal Bonded Scholar and was one of the 12 Nigerian engineers recruited to work with the NRC as a support team for the Chief Engineer, Mr. S.M.O. Denloye. This didn’t quite work out and he left to set up his own consulting and construction firm, “International Engineering Consultants”. This decision was timely and was to take advantage of the period of rebuilding the Nigerian economy after the civil war and went on to grow a very successful business. Since his first venture into entrepreneurship, there was no turning back. Chief Olopade expanded his business empire and set up many other companies alone and in partnership with others, as well as, invested in many going concerns. These include Fay Paper Products, Barshall Lotinga, Daboul Travel Limited (the oldest Travel Agency in Nigeria), Fay Hygienic Products, National Sports Lottery, African Trumpet Television, Adel Adiko Engineering and some others. He also served on the Board of many companies and organisations such as Josias Parks (makers of Union Locks and affiliate of Chubb United Kingdom), Mentholatum Nigeria, Johnson Wax and Nkalagu Cement Company. In addition to his business activities, Chief Olopade was the longest-serving Chairman of the Court of Governors of the College of Medicine,  Oloye J. A. Obafemi Olopade University of Lagos, Idi-Araba, having served from January 19th 2006 to September 13th 2013.

Chief Obafemi Olopade was widely travelled and had a very wide circle of friends across all ages, nationalities and sex. One of his more notable friends is the former President of the Federal Republic of Nigeria, Chief Olusegun Obasanjo. Chief was known for his fierce loyalty to friends and principled stand on issues he believed in. He was very helpful when called upon and could always be counted to support his many friends, in their time of need. Chief did his best to attend events hosted by his friends and associates, anywhere in the world.

Obafemi Olopade was a recipient of important traditional chieftaincy titles which include the following: •Otun Maiyegun of Egba Land •Agba Akin of Owu Kingdom. •Aare Agba Akin of Ife Kingdom He holds the titles of Officer of the Order of the Federal Republic of Nigeria (OFR) and Doctor of Engineering, D.Eng. (Honoris Causa). His membership of clubs is limited to the Rotary Club and The Metropolitan Club, where he was on the Board of Trustees for many years. He was also a past President of the Metropolitan Club, Lagos, Nigeria.

Chief’s life was very interesting in many ways and his family life of which he was very proud was also equally interesting. In Chief’s paternal family, he was the Head of the family and in his maternal family, which is the Thomas Ige-George family, he was also the oldest male. He was happily married and blessed with many children and grandchildren. Chief was a true family man and according to him, he loved women and he loved children. And this sums it all. Adieu!

How Oloye OBAFEMI OLOPADE Was Buried In ABEOKUTA was last modified: September 28th, 2021 by City People