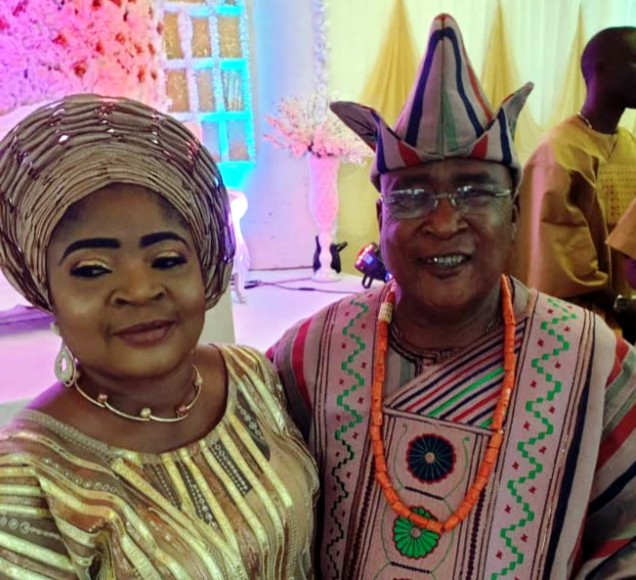 Not many people know that Fuji Icon, Alhaji Ayinla Kollington has made up with his estranged wife, Waka Queen, Salawa Abeni. We can tell you that authoritatively. A few days back, Alhaji Kollington told City People that he and his wife have ended their age-long rift which began in the 80s.

Salawa Abeni Alidu is a very popular musician who started her Waka music career as a young girl. She is from Ijebu Waterside, in Ogun State. She began her professional career in Waka music when she released her debut album titled, late General Murtala Ramat Mohammed, in 1976, on Leader Records. It became the first recording by a female artiste in Yoruba songs to sell over a million copies in Nigeria.

Abeni continued recording for Leader Records until 1986 when she ended a relationship with the record label’s owner, Lateef Adepoju. She married Kollington Ayinla and joined his record label instead, staying with him until 1994.

She was crowned “Queen of Waka Music” by the Alaafin of Oyo, Oba Lamidi Adeyemi in 1992.

General Ayinla Kollington is a living legend Fuji musician from Ilota, a village on the outskirt of Ilorin, Kwara State, Nigeria. He is also called Baba Alatika, Kebe-n-Kwara, Baba Alagbado.

Kollington Ayinla ranks alongside his friend and competitor Ayinde Barrister as the 2 most important artistes to have dominated Fuji music from its inception in the 1970s through to the 1990s by which time it had grown to become one of the most popular dance genres in Nigeria.

Between the mid-70s and late 80s, Kollington ranked with Barrister as the leading star of Nigerian Fuji music – like Apala and Waka, a Muslim-dominated relation of juju, retaining that style’s vocal and percussion ingredients but abandoning its use of electric guitars in order to obtain a more traditional, roots-based sound.

He began recording for Nigerian EMI in 1974, and in 1978 achieved a pronounced, but temporary, lead over Barrister when his introduction of the powerful bata drum (Fuji had until that time relied almost exclusively on talking, or ‘squeeze’, drums) caught the imagination of record buyers.

In 1982, when Fuji was beginning to seriously rival Juju as Nigeria’s most popular contemporary roots music, he set up his own label, Kollington Records, through which he released no fewer than 30 albums over the next 5 years. As the popularity of Fuji grew, and the market became big enough to support both artists, Kollington and Barrister’s enmity diminished.

By 1983, both men were able to stand side by side as mourners at the funeral of Apala star Haruna Ishola. A new and equally public rivalry emerged in the mid-80s, this time with Waka star Queen Salawa Abeni, who exchanged bitter personal insults with Kollington over a series of album releases and counter-releases. Sadly, for non-Yoruba speakers, the verbal fisticuffs remain unintelligible, though the drum-heavy, hypnotic music was universal in its appeal.

At the start of the 1980s, Ayinla started his own record company, Kollington Records, to release his music and remains to this day an extremely prolific artiste, having recorded 160 albums.  We reminded him that we saw he and Alhaja Salawa come together last year February during the Valentine Promo that ADRON Homes did. He was decked in Suit in the Advert. Have they truly reconciled we asked. “Yes, Salawa and I have made up. She is my wife. Don’t forget she has 3 successful children for me. She is my wife and she will continue to be my wife forever. She is my wife ooo. (Iyawo mi ni ooo) I can’t deny her. I can’t push her anywhere. She also can’t deny me.

We have children (awon omo alalubarika) so what’s the problem? What next?