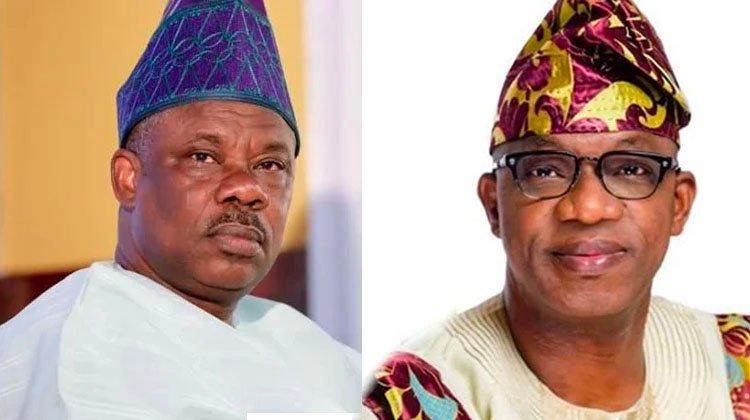 Will Gov. Dapo Abiodun get a 2nd term ticket from Ogun APC? That is the BIG question on the lips of political watchers in the state. The Ogun State Governor thinks so, say, insiders. He is so sure that he will get the Guber ticket of his party, for so many reasons. He feels he has done well. He feels he will get the support of Vice-President Osinbajo, his political godfather. He feels he will be able to cut a deal with Asiwaju Bola Tinubu who will need his support to win Ogun State. He is also working towards the APC at the National level to accept his elected candidates, thrown up, at the recent State Congress.

But his biggest headache and stumbling block will be Senator Ibikunle Amosun, who is a strong force in the politics of Ogun State. He has vowed to stop Abiodun from coming back, we hear. Because of all the political forces that rallied round Abiodun in 2019, he was able to defeat Amosun’s candidate, Hon. Akinlade at the guber polls. Amosun’s strategy then was to stay on in APC and field Akinlade for Governor in APM. The overwhelming forces against Akinlade then made him lose to Abiodun who had a lot of groups working for him from the VP to OGD  Group, Yayi Group and Co.

This time around, Amosun has mobilised his political structure across the state to make sure that Abiodun does not get the ticket, and if he does, he and his group may decamp to another party. Some people have even suggested that it might even be a replay of the last guber elections. Amosun may stay on in APC, slug it out, and ask his associates to work with a strong party like the PDP. Political pundits say he is most likely going to cut a deal with Hon. Ladi Adebutu, who we hear is going for the governorship. Don’t forget that Adebutu teamed up with the Amosun group in 2019 against Abiodun. Though they both reconciled after Abiodun won, all is not too well between Gov. Abiodun & Ladi right now.

Going by Amosun’s Mathematics, to ensure that Dapo does not come back, he will have to use a candidate from Ijebu or Remo axis to complete the remaining 4 years of the Ogun East slot as Governor, after which it will rotate back to the Egba/Egbado section of the state.

City People can authoritatively reveal that Amosun is currently working round the clock to stop Abiodun. He is sure that with what his group calls Abiodun’s dismal performance, he won’t enjoy the kind of huge and tremendous support he enjoyed the last time. He is also banking on the probability that members of the Senator Yayi group who currently work with Abiodun will pull out.

He also thinks that with the shoddy way and manner Dapo treated many politicians who worked with him, his ranks will soon be depleted. Amosun feels he is right now in control of the 3 senatorial zones Ogun Central (where he comes from), Ogun West (where his former Chief of Staff, Tolu Odebiyi is currently the Senator) and Ogun East (where Amosun’s good friend and political associate, Lekan Mustapha is the current Senator).

Odebiyi, a first time Senator is seeking a 2nd term, so also Mustapha who will like to go back. As it is,  Amosun is one leg in with the successful way his group had their parallel congress a few months back, which rattled Gov. Abiodun who came out to condemn Amosun’s move.

The supporters of Gov. Dapo Abiodun and that of Amosun clashed after which they held parallel congresses for the APC in Ogun State.

The Governor’s camp elected Chief Yemi Sanusi as Chairman at the exercise conducted at the MKO Abiola Stadium, Abeokuta by a 7-member committee led by Hon. Wale Ohu. Sanusi is the immediate past Caretaker Committee Chairman of the party in the state. His sole challenger, Comrade Nuberu Olufemi, stepped down some minutes to the commencement of the exercise.

He was unanimously elected by the 1,730 delegates from the 236 wards, cutting across the 20 local governments in a consensus arrangement via voice affirmation. Others who emerged from the camp include James Dina (Deputy Chairman), Aderibigbe Tella (Secretary) and Tunde Oladunjoye (Publicity Secretary).

The Amosun camp elected Derin Adebiyi as factional Chairman. The 2 groups had a clash as they chased themselves with deadly weapons. Addressing APC members at the MKO Abiola Stadium at the conclusion of the congress, Gov. Dapo Abiodun described what took place at Ake Palace arcade ground as a show of shame. Abiodun threatened to deal decisively with any person, however highly placed, that wants to breach the peace of Ogun State. “I am the only Governor of the state today. For those still living in the illusion of grandeur and being deluded, I hope the message is heard loud and clear,” Abiodun declared.

Fixing Nigeria before the fall.. By Pa Ayo Adebanjo

What To Expect From TINUBU If He...