How The EJIRO Brothers Became BIG In Nollywood 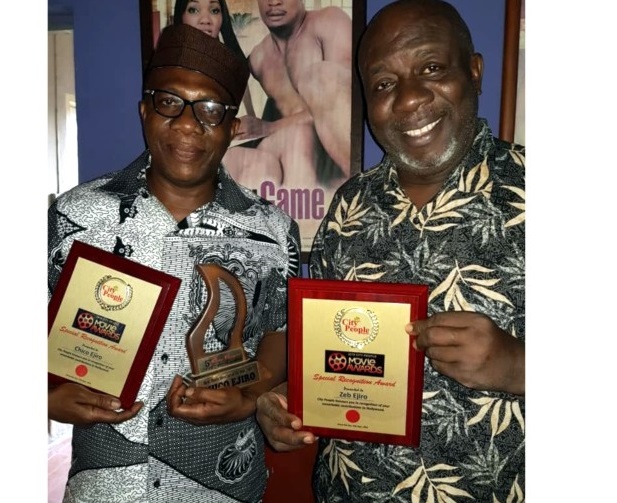 You and your 2 brothers have contributed a lot to Nollywood. Each time you look back how do your accomplishments make you feel?

I give Almighty God the glory for these many years. I feel very happy for having been in the industry for so long. Its been close to 30 years one funny thing that many people don’t know is that I read Agriculture in school. My elder brother asked me to join him. That was in the 80s and since then it has been a success story. I studied Agriculture at the University of Ife. I went to the Federal University of Agriculture of Imodike, to complete my course in Agric Econs.

At that time did you think you will end up in the movie world?

No, I didn’t think so. But I love Entertainment. I have always loved Entertainment. When I came to Lagos in the late 80s, I started working with my older brother. With his set in NTA along with Sadiq Dabba, and co. From that point, I developed the interest in it.

How did you carve your niche within the industry?

When I came in I did a lot of things. I tried to be a cameraman, to be a scriptwriter, to be an Editor, to be a costumier I picked my passion to succeed from there.

How do you feel knowing that most of the big names in the industry have passed through you and Zeb?

I will say I give glory to God again. I am happy that a lot of them have passed through us. When we go to events people give us accolades and acknowledge what I have done in their lives and career. In the early stage of their career, I am happy that I was there to work with them. They also contributed to my profile. It worked both ways.

Were there times you felt like quitting the industry to go and do other things?

Yes. There is no business you do that you won’t feel that way because of challenges and you tend to reflect and look back to ask yourself am I in the right business? I keep telling the younger ones today that life is about Belief and Passion when you put money in front of what you want to do, you will not succeed. Put the money aside. Develop your business. Develop your passion. Decide that you want to make it in life. Hard work is key. When I started I just had that belief that this is it. I have to be here. I just believe that the entertainment business in big business. I believe if we get it right here, it will be fantastic. That’s why I have been on it all these years with God on my side.

The name Ejiro Brothers have become a big name in the industry. How does that make you feel?

I feel great. I am happy. We are 3 brothers anyway. There is Peter Red Ejiro. He is running an Entertainment School in Delta State. I am happy about it. Peter was in Lagos before we established the school in Delta and asked him to run it to develop talent and stuff like that. The school is about 6 years. It is on Broadcasting, Drama and stuff like that. We award certificate from the Federal government and Delta State government.

How did you guys adjust to the changes in technology and social media?

We had to move with time. Anybody who does not move with time with the new technology and new environment, they will leave you behind. For a lot of the starters, it was very difficult. But you can’t be playing at this level and not step up to embrace Technology. You just have to catch up.

Where are the Ejiro Brothers from?

What role has your wife played in your success?

I have to thank my wife. She’s been very supportive. She’s been with me over the years in Nollywood. It is been tough. She has always supported me. She’s into the business too. Shes supported me morally and financially. We just shot a new movie and she used her money to produce it. Its called Night Bus To Lagos. We had to fly to Enugu to see Pete Edoche. We wanted him in the movie. Monalisa Chinda is in the movie. We are working hard with a lot of the theatres. So that it can come out in December 2018.

My wife is a Producer. When we met she was a big-time Costumier. She had a shop at Adeniran Ogunsanya called Real Colours. She used to costume those big films. Now, she has gone into Aso Oke, importing them. I have to thank her because I am not a single tree in a forest. I thank my elder brother, Zeb. He gave me a lot of support. He made me a filmmaker. I have won top awards all over the world like in America, South Africa (Durban) I thank him for his support all over the years. He made me who I am today. And also my friends, like Black Arrow (Segun Arinze) he got the name Black Arrow from my movie he acted in Silent Night. That is what gave him the name. The movie was a massive hit.

When you produced Silent Night did you think it will succeed?

When you do things like that. Nobody knows how it will turn out. We didn’t know. But I have to also thank City People for my new award. I won an award from City People 20 years and here I am, back again to win another one.

READ ALSO: I DIDN’T SET OUT TO BE AN ACTRESS – POPULAR ACTRESS & PRODUCER, SEYI EDUN (SHAI)

How The EJIRO Brothers Became BIG In Nollywood was last modified: September 24th, 2018 by City People

Star Actress, GENEVIEVE Hits It BIG With Her New Movie!

COMMUNIQUE ISSUED AT THE END OF A...