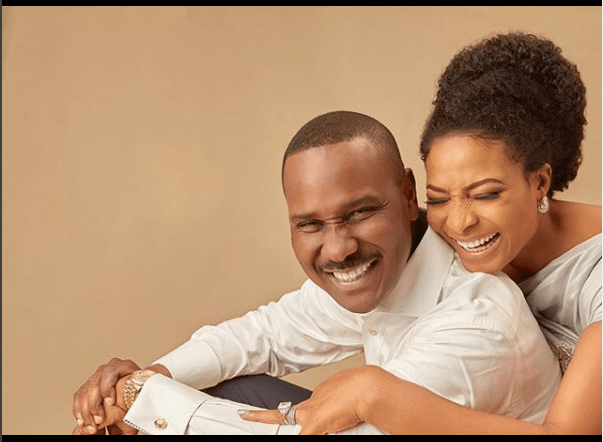 Many people were shocked early last week, when popular events planner, Ibidunni Ighodalo died, and her husband Pastor Ituah mustered the courage to still go ahead and officiate at the burial service he had been committed to attend.

At the service, Pastor Ituah gave a moving speech. “Everywhere is tense, confusion frightening, and disturbing, but here we are today. I mean if they had told us last week Sunday that we will be here to celebrate Ayodeji’s life, we say it’s not possible. He was ill no doubt but we are believing God that he’ll be well. But here we are right now and there he is. And of course a lot of know that I really shouldn’t be here, but that’s how life is”.

“2’O clock this morning, I received a call that shattered my entire life. But life must go on, and here we are today. So I have just come to talk to us, very peacefully on something I have called life, life, life, life. Life is a deep mystery. There’s no one human being no matter how wise they are like Solomon, who can say to you that they fully understand life. The bible say we see in part, we understand in part, we prophesy in part. And he says most of the time we see like in a dark alley, but there comes a time when we see clearly as Jesus sees. Life is a mystery and let us accept the mystery of life.

“We do not have control over most things in life, how you were born, which womb you came from and your race, complexion, your height, even your weight.

“Nobody has control over life. This time yesterday if anyone had told me this is how it will be I would have said it is impossible. But this is how life is. Life is nothing.”

Many people commended his raw courage, for being able to garner the inner strength to still conduct that service. At the burial service, he spoke about how the news of his wife shattered him.

In her lifetime, Pastor Ituah Ighodalo and his wife, late Ibidun were a power couple. Whenever the couple celebrates their wedding anniversary on Thursday, February 16, Ibidun usually sends a lengthy message alongside beautiful pictures on her social media page. This she has been doing for few years. When Ibidun and Pastor Ituah celebrated their 10 years anniversary, she posted a long love letter with a throwback picture on Instagram. She took her wall and celebrated her marriage to her husband whom she calls “my life, my love, my sunshine and Popino. The Instagram post featured an antique picture from their wedding day 10 years ago accompanied by the following words.

“Where has 10 years gone?”My heart, my soulmate, my one true love… thank you for being an extension of God’s love to me… thank you for being a provider, protector and my priest.”You have proved beyond a shadow of doubt that this day 10 years ago I made the best decision of my life by taking and accepting you as my husband to have and to hold…

“Doing life with you has had its ups and downs, tough days, tough weeks, tough decisions but God was there, seated on his throne, wondered if he had forsaken us little did I know he had His plans…”May our love continue to grow deeper, wax stronger and taste sweeter by the grace of God who loves us both unconditionally…”

And then she concluded the post with a renewal of her vows “Ituah, my life, my love, my sunshine I love you forever and a day more… and I give myself to you all over again forever…”

This beautiful marriage of theirs started when Ibidun Ighodalo was a Youth Corper.

Their marriage is one that is widely talked about most times. They are 2 lovely pair of couples who is loved by many. Pastor Ituah and Ibidun’s love story is what one will listen to every time and you will never get tired of. Guarded by biblical injunctions and based on true love, their 13-year marriage has lasted for a while.

They both met few years back before they got married 13 years ago. The wife was also a member of Christ church. She was then a Youth Corps member. The courtship lasted over four years, even though he proposed to Ibidunni after 18 months of friendship. They tied the nuptial knot on 16 February 2007 in Lagos and was followed by the traditional wedding 3 days later in Ibadan, Oyo State.

On Ibidun’s part of the love story, she revealed, “First I did not set out to marry a pastor, I was outside if an event venue and wanted to pick something inside the hall when I bumped into a man, oh sorry,I said and went inside but something in my spirit told me that he was my husband. I don’t believe the voice because that was the last thing on my mind. Later we became friends and I saw in him, a father and a confidant. He fitted into my late father’s shoes and did all that my father did to me. I lost my father early but he admired me and I had a strong relationship with him. So when I met him, I connected to him”.

Pastor Ituah also reminisced on how married life has been, We thank God. It’s been very nice. Very wonderful. I have a very understanding wife. I believe she loves me very much. She’s simple. She’s easy to get along with, and we are very good friends. So, I’m quite happy, to be honest. And he also mentioned some of the things that got him attracted to her.”Her simplicity. She’s an attractive person, but then when we got talking, I found her to be simple, down to earth, sincere and willing to accept me for what I was and not what she thought I was. And we got on very well and I had this desire even if I didn’t marry her to look after her; to protect her, to guide her, and to direct her. I had this desire just to take care of her. I just felt that somehow, God had brought her into my life to look after, so I told her that: look even if nothing happens, I will look after you. And I think I’ve kept faithful to that commitment because I do look after her.

Pastor Ituah and Ibidun’s marriage is what many couples as made a model for theirs, it was all love encompassing with each passing day. Until Ibidun passed on, the love was still waxing stronger and never wants to leave each other’s sight.

Pastor Ituah was a pastor at Redeemed Christian Church of God, Christ Church Parish before he left to set up his own Trinity House Church in Lagos. Pastor Ighodalo, an Accountant, and a writer attended the King’s College, International School then proceeded to the University of Ibadan. He obtained a combined honours degree in Economics and Accounting in 1982 at the University of Hull, England. He is a Partner at SIAO, an accounting firm.

The busy pastor who does some other things apart from pastoring run an accounting firm, He chairs 14 NGOs (Non-governmental organizations), and he is on the board of 10 companies, and chair four of them. A lover of Liverpool and Brazil soccer stars, Ituah worked at PricewaterhouseCoopers after his National Youth Service programme. He then took a giant leap and started his business in 1985 -it was a management consulting company combined with a video rental and video/film production company. He is the last of 3 children. He is the Editor-in-Chief of TIMELESS Newspaper, THE CHRISTIAN NEWS and TIMELESS BUSINESS & LEADERSHIP QUARTERLY. He gave his life to Christ in 1993 and was ordained pastor in 1995. He has worked as Associate Pastor of Freedom Hall, (later renamed Hope Hall) as well as the City of David Parishes of R.C.C.G. and has been involved in international missions, helping to pioneer several Redeemed Christian Church of God parishes abroad before he set up his own, Trinity House.

How The News Of My Wife’s Death Shattered Me! – Pastor ITUAH IGHADALO’s Shocking Confession was last modified: June 22nd, 2020 by Tayo Oyediji