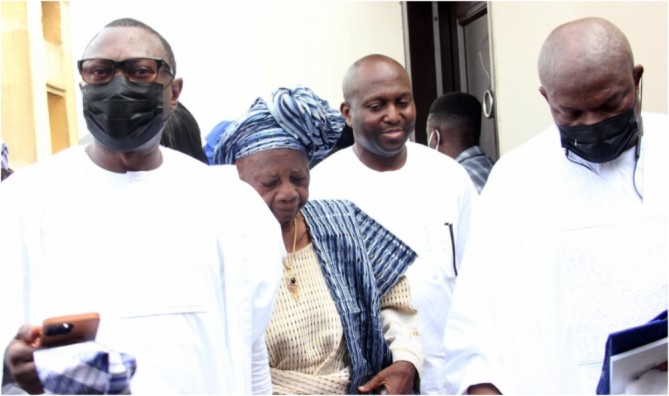 The classy 90th birthday of former First Lady of Lagos State, Lady Christine Adedoja Otedola may have come and gone but the memories of all the razzmatazz and highpoints at the party will not be forgotten in a hurry. It was a day Epe stood still as thousands of individuals stormed the church and birthday reception of the woman many call First Lady of all ladies.

Not only because Mama Otedola was married to the late governor of Lagos, Sir Micheal Otedola but because her children are also doing very well in all their respective careers which made many top dignitaries honour them as their mum turned 90.

It was such a glorious day where hundreds of important personalities came under one umbrella to celebrate this iconic woman whom everybody described as being loving and magnanimous in philanthropy.

So many preparations were involved for the big birthday and together with the children of the celebrant were their amazing spouses who shone and glowed at the party.

They dazzled all guests with the pivotal roles each and every one of them played. Not many people know the wives and husbands of Otedola’s children, but they always come out in full force anytime there is a common celebration involving all of them. The Otedola’s children are six, 4 sons and 2 daughters. Prominent at the party were the wives of the sons and husbands of the daughters.

The Otedolas are very popular family no doubt, but one of them, Femi’s name rings a bell the most at its mention. Many people know the billionaire businessman, Femi Otedola like the palm of their hands because of his business acumen and the crowd he rolls with within the society. But the other children too are quite popular in their own space and highly successful as well. At the just celebrated 90th superlative birthday of their mum, Lady Doja Otedola, the former First Lady of Lagos, all the Otedola children, their spouses and grandchildren all came out in numbers.

The 6 children are Ayokunle Micheal Otedola, Femi Otedola, Rotimi Otedola, the twins, Lola Otedola Idahon, Tola Otedola Oye and Rotimi Otedola. Not all of their spouses were conspicuous at the birthday but we sighted some of the inlaws who stood beside mama Otedola all through. They were fully involved in the party and attended to guests well. The first born, Ayokunle is married to Kim, while Femi Otedola’s wife is Nana, the 3rd born is Rotimi Otedola, while the twins Omolola Taiwo’s husband is Segun Idahor, the other twin, Tola Kehinde’s husband is Bola Oye while Muyiwa Otedola is married to Abi.

From the church service to the reception, there were 2 wives of the Otedola sons who were very prominent and were seen taking up one responsibility or the other, Kim and Abi Otedola. These 2 beautiful women are the wives of Ayo Otedola and Muyiwa Otedola respectively. They wore a beautiful silver lace and complimented it with a silver headgear.

Femi’s wife, Nana Otedola was absent and in faraway in London where she is based.

The only 2 son inlaws Mama Otedola has are Mr Segun Idahor and Mr Bola Oye who are married to the only 2 daughters (twin) that mama has. These 2 gentle men were both up and doing, greeting guests and leading them to their seats. Alongside their wives and the Otedola brothers, the bond was very tight.

Let’s take you through the life of Mama’s children and their spouses.

The first born Ayo Otedola who is married to Kim is a top businessman who has his hands in many lucrative businesses. His wife is a non Nigerian and he has also become a grandfather. Femi Otedola who married Nana is the most popular and a businessman to the core. The philanthropist, and former Chairman of Forte Oil Plc, an importer of fuel products, is the founder of Zenon Petroleum and Gas Ltd, and the owner of a number of other businesses across shipping, real estate and finance. He has recently invested in power generation as part of the liberalisation of the sector in Nigeria.

Next to him is Rotimi Otedola fondly called Timi, he is an entertainer. He stole the show on his mums birthday with his superb performance. In fact, not until that day that many heard of him or listened to his music many didn’t know he is a musician and a good one at that. His class of music is different. He is a percussionist who plays different instruments especially the guitar. He gave a very beautiful performance with his band on his mums birthday which got many standing to applaud his craft.

He is followed by his twin beautiful daughters, Lola and Tola. The 2 beautiful sisters shone like stars. They wore the same outfit with their mum, they were extremely happy and grateful for their mum’s life which showed in their tributes in the documentary. All through the birthday ceremony, they never left their mum’s side, one of the twin sisters, Tola also gave birth to twins.

He was up and about at the party with his lovely wife.

The pretty woman who calls the shots as a professional travel consultant was the cynosure of all eyes at the birthday party.

She was up and about at the party such that you could even mistake her for Mama Otedola’s biological daughter.

The pretty lady was seen decked in a beautiful stoned white outfit which she complimented with a royal blue headgear. She accessorised her outfit with a timeless gold jewelry and shone like a star at the party.

She was on hand to receive many guests and most especially her husbands guests.

At the reception, up to 10 tables were numbered with the table tag which has the inscription, 10 dollar which is her husbands alias.

She made sure her table bubbled and guests had fun all through the party. She was also sighted so close to Mama Otedola at the church service and her contributions at the reception were also significant.

Mrs Abi Otedola is the CEO of top travel agent company, Airjara. The widely travel consultant is on top of her game when it comes to travels and tours.

She is well grounded in the travel sector that most top celebrities seek her expertise on anything relating to Travels and tours. She is a widely traveled woman who has been all over the world.

She is lovingly married to Muyiwa Otedola,an entertainment guru who sits atop the hugely popular and flourishing 10 dollar the great entertainment company.

How The OTEDOLA In-laws Dazzled At Lady DOJA OTEDOLA’s 90th Birthday was last modified: May 2nd, 2022 by Tayo Oyediji