How THEO LAWSON & YENI KUTI Fell In Love 23 Yrs Ago 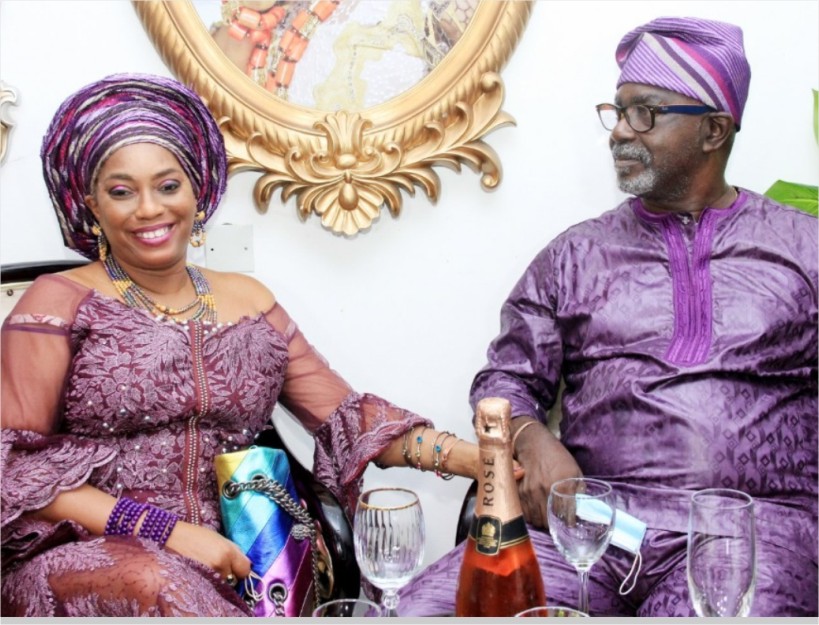 Everybody knows Yeni Kuti. She is a popular dancer, musician and entertainer. Yeni Kuti is the first daughter of the late Afrobeat legend, Fela Anikulapo Kuti. She also co-anchors Your View, the TVC morning programme. She has lived an exciting, Life which has put her in public glare. But only very few know and her love story with Arch Theo Lawson, a top architect, music lover and a keen follower of Fela. Both of them have come a long way, but many people don’t know their story.

Yeni and Theo are two older adults who are still rocking the Nigerian entertainment industry. Yeni is a performer while Theo co-runs the Freedom Park on the island which showcases a different artistes and gives them a platform to do their thing. To many people, that was their meeting point and that gave them the leverage to fall in love. But that happens not to be accurate. Both have been in love for a very long time and didn’t have the opportunity to express what they feel for each other until a few years ago.

Let’s also quickly remind you that on May 24, 2016, Theo Lawson made his love for Yeni publicly when she clocked fifty-five and since then, many people have been expecting a wedding bell but this awesome couple has a different idea entirely.

On Saturday, October 31st 2020, the duo were sighted stepping out together in the same attire just like a real African couple at Owambe and that again left many confused tongues wagging. Talking about his outfit at Kikelomo Atanda-Owo’s birthday where they were a VIP guest alongside many other celebrities, Theo said I have a very good dresser or stylist if you must know, pointing to Yeni. When he was asked why he rarely wears native attires, he noted that he’s always Afrocentric with his dressings.

Why have they not really been stepping out together lately, you may want to ask? Coronavirus, Theo said. Coro kept us away for a long time and the End SARS.

Have you ever wondered what the chemistry is like between the duo? Here is an answer… Personally, Fela was a major inspiration to me, and when Fela died, I offered to build his tomb, then Yeni and I had first real contacts and somewhere along the line, some chemistry came in… (Yeni cuts in) don’t mind him, let me say my own version, my own version is different, she retorted. I had fancied him a long time before we got together, even when he was doing my father’s tomb, I thought he was a very handsome, lovely guy and it was inevitable that we met or hooked up, I will leave it there. Reacting to Yeni’s view, Theo said now that you’ve said it publicly, I have to go and review what happened that time, may be it was mutual. You know she’s a big bully, it’s always difficult to say no to her or else she gives you a head-butt, (laughs).

How have they been able to sustain the relationship over the years? We are both very strong personalities, we have our different interests, so we do our things and we meet to explore the opportunities of our togetherness. We have our different lives and we come together to share those experiences. She has her house, I have mine but we live together. What Theo is saying is very important because everybody thinks marriage is very important. I guess for some people, marriage is important but meeting of minds is more important and that’s where we meet. We have a meeting of minds, sometimes he has to be on his own and sometimes I have to be on my own butt we are always together whether we live in the same house or not. We’ve been together for about 14 or fifteen years now and some marriages haven’t even lasted that long. I see a lot of married couples and we are a lot closer than them. I think people should learn a lot about space. We give each other a lot of space but we are still together.

Are they still getting married at 75 & 77? Oh yes, we’ve picked a date already. When she’s 75 and I am 77, we will have a big wedding in Badagry. When we told his older brother that we are going to get married when we clock 75 and 77, he said you people have to do so now because I might not live to see it but we said no, you will see us marry; and then, he passed away this year.

Why the choice of Badagry, you may wonder? Because she likes cooking. She’s always said she’s a good cook so we will open a beer parlour at the waterfront. She will be in the kitchen and I will be at the bar. We will be receiving you people from Lagos to come and be gisting us.

What do they have to say about the End SARS protest? I think that the youths voiced their opinion and their opinion was not just about End SARS, it was about end bad governance, about our leaders waking up to their responsibilities, about them ruling us and not leading us. I am almost 60 and these are the things we have been crying about for about 30-40 years and they still don’t want to listen. The time is now, don’t let this escalate beyond what you can control. Talk to the youths, feel them, feel the Nigerian people, it’s not even about the youths, feel the pulse of Nigerians, I think that is very important for the government of today. Somebody sent me a text two days ago saying that we are talking about youths being in the government and that Amaechi has been there since he was in his 30s and now he’s over 50. It’s true, they’ve been there for a long time, they just didn’t do the right thing so it’s the mindset. We have to change the mindset because the development of Nigeria and Africa is very important. When you go abroad, what you see there, want it for your people, not just because you have the money to go there, no. let my people too enjoy because if they do, then I am enjoying too. They should wake up and smell the coffin.

Did they ever see Fela’s spirit at work during the End SARS protest? Theo responded with the fact that the theme for this year’s FELABRATION was fight to finish, fight to win and we chose that deliberately not because of End SARS or coronavirus but for a myriad of problems. There is racism in America and the SARS attacks in Nigeria. In America, police are killing black people and here in Nigeria, our police are killing people too. We also have a whole lot of problems in the environment like flooding, so we picked up the theme to draw attention to those problems and then, SARS came up. So all the protests going on especially at the toll gate for us was felabration because Fela’s spirit was at the centre of this protest. So basically, felabration happened big time and it was all around End SARS.

To complete it, the bottom line is that felabration is all about End SARS, though we didn’t plan it to be about End SARS. Just as Theo said, the theme for this year was fight to finish, fight to win, so I think Fela spoke to us from the grave. The committee of felabration had come up with another theme entirely, it was initially Coromentality before we changed it around April or May, Yeni added.

How Nigeria Will Benefit From A JOE BIDEN Presidency

How Showbiz Stars Spend Millions To Be...