I Am Battle Ready For The 2019 Guber Elections – OGUN Guber Aspirant, GNI 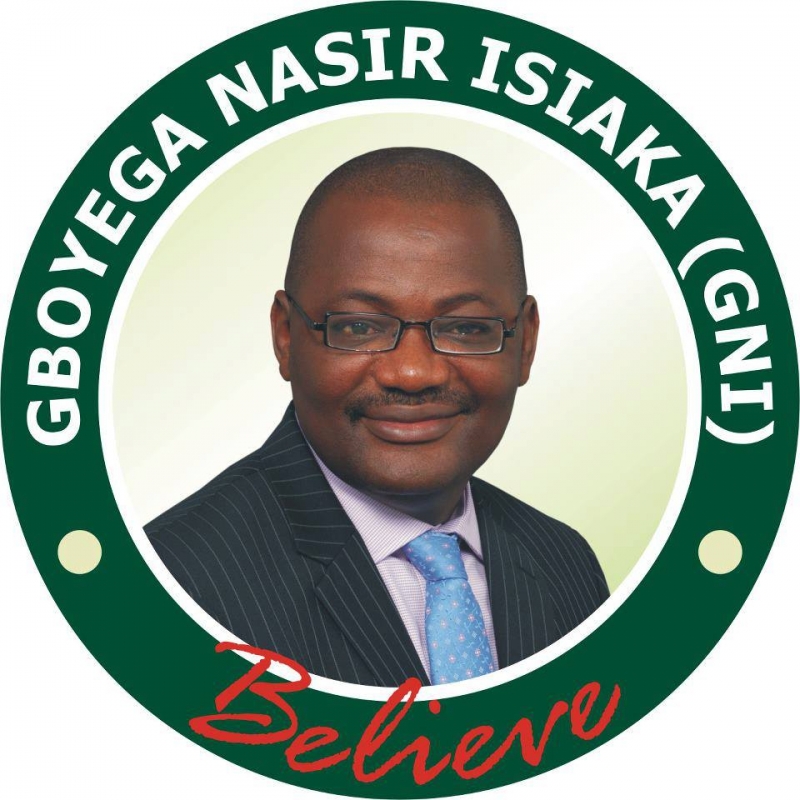 Everyone calls him GNI. But his real name is Prince Gboyega Nasir Isiaka. At the last Ogun State Governorship elections, he made a great showing. Officially he came No 2, though he and his supporters insist till today that he won that election.

Nonetheless, Gboyega Nasiru Isiaka has put that behind him and he has begun work on the 2019 governorship race which he says he would win hands down. He is the most experienced and the aspirant that has been in the race longest Who is the real GNI? City People can tell you.

Raised in a very strict, religious and disciplined home, GNI had no choice but to conform to the best standards possible. This, to a large extent, moulded him into the refined and packaged person he is today. He attended Ansarudeen Primary School, Imeko Afon between 1968 and 1973 after which he proceeded to Nazareth High School, Imeko between 1973 and 1978. He also had a stint at the Abeokuta Continuing Education Centre for knowledge enhancement.

Between this period and the time he was admitted into a higher institution, GNI worked briefly as a Clerical Officer at the Egbado (now Yewa) North Local Government Secretariat. The first point of call for his higher institution was Ogun State Polytechnic, now (Moshood Abiola Polytechnic), Abeokuta where he was admitted to study Mass Communication in 1981. He was there for a few months when he realised he was not fulfilled with the career path he was towing; hence he left the school and pursued his dream.

He was offered admission into the University of Ife (now Obafemi Awolowo University (OAU) to study Accounting in 1982. He grabbed the opportunity and was doggedly committed to his studies. By 1986, he graduated and was awarded a Bachelor of Science Degree in Accounting (B.Sc. Accounting) with a First Class Honours. He proceeded for the one year National Youth Service Corps (NYSC) programme in Jos Municipal Local Government area of Plateau State where his place of primary assignment was Joseph Akande & Co. Chartered Accountants with auditing and accounting as his main duties. GNI’s discipline and astuteness at duties won over his employers and was consequently retained in 1987.

He qualified as a Chartered Accountant (ACA) in 1988. In 1995 he did his Masters in Business Administration (MBA) at the University of Lagos and also did the Senior Management Programme (SMP) at the Lagos Business School in 1998. His unquenchable passion for administrative excellence made him become a qualified associate in 1988 and his clean record of practice nudged him to become a Fellow of Institute of Chartered Accountants (FCA) in April 2003.

He is also an Associate, Chartered Institute of Stockbrokers (CIS) as well as an Associate member of the Chartered Institute of Taxation of Nigeria (CITN). In furtherance of his bid to attain leadership excellence, he took a leadership course in “Leadership in the 21st Century” at the John F. Kennedy Centre, Harvard University, United States of America in 2009. All these academic certifications, post graduate qualifications,  fellowships and honorariums were achieved by dint of hard work, forthrightness, humility and trust in Almighty Allah, Who has been his strength and pillar in times of challenges. Some other professional training he underwent included the Euro Money Course in Investment Capital Management and Strategic training in Water and Power Financing.

The real corporate experience in the life of GNI kicked off when he was retained by Joseph Akande & Co. Chartered Accountants after his NYSC. He was in charge of Audit and Accounts of all the businesses of the organization, a role he played diligently for two years before leaving in 1989 to join Lion Bank for career improvement. At Lion Bank, he functioned in the Audit and Investment Banking departments. He was able to use his initiative to craft policies and project development strategies that substantially increased the investment profile and consequently secured upscale businesses for the bank. He left Lion Bank with a track record of performance. In February 1996, he was appointed as Assistant Manager, Investment Banking at Lead Merchant Bank Plc where he held the investment banking portfolio. He immediately brought his experience, training and competence to bear on the initiation reformative policies, risk taking and promotion of shrewd investments that uplifted the investment portfolio of the organization. He rose through the ranks to the position of Assistant General Manager (AGM) and Head of the Investment Banking Group overseeing general investments and Lead Investment Limited, a subsidiary of the Bank. Gboyega ISIAKA also led various corporate transactions that include Nigerdock Plc and raising capItal for First Bank Plc Union Bank Plc and several others. During the period, the Bank won the Best Issuing House in Nigeria Award for three consecutive years. He left Lead Bank Plc in October 2003 with his head high.

In between the period, GNI also engaged in private audit and investment consultancy services both in Nigeria and outside the country.

After a break of 8 years from private world for public service, GNI has since 2011 returned to the private world as the Chief Executive Officer of both Edgefield Development & Investment Partners (an infrastructure development and advisory firm) and GNI & Associates Ltd (a professional Services & Consulting firm) with offices in Lagos and Abuja. The international partnerships the companies presently enjoy and the inroad made by both firms within the short period of establishment, are good testimonies to the managerial shrewdness of Prince Gboyega Nasir ISIAKA.

His track record in banking, especially Investment banking caught the attention of the then Governor of Ogun State, His Excellency, Otunba Gbenga Daniel, who appointed him in November 2003 as his Special Assistant on Investments. GNI seized the opportunity and partnered with the Economic Team to broker many lucrative business deals that placed the state on the pedestal of economic development.

In July 2004, Daniel, also appointed ISIAKA as the pioneer Group Managing Director of the Gateway Holdings Limited, the investment company of the state. In public service, he also served in different capacities as Chairman, Ogun Guangdong Free Trade Zone Working Implementation Committee; member, Ogun Finance Committee; member, Economic Summit Planning Committee and member, Ogun State Economic Advisory Council (EAC) among others. In all of these calls to service, he distinguished and comported himself creditably.

Unknown to many people, Politics runs in Gboyega Nasir ISIAKA but was dormant for a long period before it came to find fulfillment especially when one considers the fact that his father, late Pa T. A. Isiaka was a notable Yewa politician and leader in the Southwest during the 1st and 2nd Republics. He was a prominent member of the political movements of that era. The height of his involvement was when he was appointed Executive Director of the defunct Western Nigeria Development Corporation (WNDC) Ibadan.

GNI did not set out to be a partisan party man considering his deep private sector upbnngmg and reserved mindset. His trajectory in life was indeed preparing him for a major role in life. He began his political  journey during his university days when, in 1988, he was apoined Director of Organisation of the Egbado (Yewa) Students Association ofthe University of Ife. His administrative acumen must have impressed members and he was consequently elected the President of the Association in 1989.

Thereafter, his politics was basically in the boardrooms of the many corporate organisations he worked with and some of the experiences were invaluable and revealing. But coming on board the Daniel government was a paradigm shift as he was baptised into mainstream politics. Ever since, he has  played active roles in the political events of Ogun State which culminated in his gubernatorial contest in the 2011 general elections in Ogun State.

Gboyega ISIAKA is not all about academics, professionalism and administrative excellence. He is also a family man. He is happily married to Jelilat Oluwatoyin Isiaka and the marriage is blessed with lovely children. Gboyega is social, jovial and relatively outgoing but a little reserved and cautious. He belongs to a number of social associations and clubs. Such include the prestigious Ikoyi Club 1938 Lagos, Rock Beach Resort Abeokuta, Rotary Club of Sagamu Central and the Yewa Union Ilaro among others.

What has GNI been up to in the last 18 months since he lost to Senator Ibikunle Amosun? What are his strategies? These and many more were the questions City People Publisher, SEYE KEHINDE asked GNI last week and he found him to be a very intelligent and experienced politician.

I Am Battle Ready For The 2019 Guber Elections – OGUN Guber Aspirant, GNI was last modified: January 16th, 2017 by Daniji Emmanuel