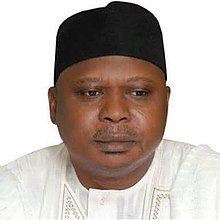 Have you ever met or listened to Alhaji Kabiru Tanimu Turaki (SAN) speak before? If you haven’t, lets quickly tell you a little about this handsome Northern Lawyer who wants to be the next President of Nigeria.

He is an orator and a deep thinker. He is smooth, clean and urbane. He is one of the new refined politicians of this age and time. He is not your rrun-of-the-millpoliticians whose worldview are narrow and myopic. He has got political experience. He has also built a solid name for himself in both public and professional life.

City People met him last week in Lagos and found him to be very sound and articulate. We heard him talk passionately about Nigeria and his plans for Nigeria and how he believes he can run Nigeria far better than President Buhari. He revealed why he came out to run for Presidency and why he is dead sure, he will clinch the PDP ticket. He is a PDP presidential aspirant. He said with the shoddy performance of the APC in the last 3 years, the PDP is still a better choice for Nigerians.

He revealed things that stand him head and shoulders above other presidential aspirants. He said he is not coming with a baggage like other aspirants. “I am not fighting anybody and nobody is fighting me. He revealed that he is a clean and honest politician who is not at war with any other politician. “I am friends with all the other aspirants I have visited them all to discuss. He says he is friends with so many politicians across the board.

He says he supports Restructuring. He is one of those who believe Nigeria will run better if the centre is made less attractive, as it is, presently. By the time Alhaji Kabiru Tanimu ended his presentation, he got a thunderous applause for his ideas and ideals, from the cross section fo media chiefs in attendance.

For those not to familiar with him, the question that will pop up is: who is this man called Tanimu Turaki who has suddenly taken the centre stage of national politics. City People can tell you a lot. He is 62 but he does not look it. He looks 50+. He is from Kebbi.

Kabiru Tanimu Turaki is a sound Senior Advocate of Nigeria and a former Minister of Special Duties and Intergovernment Affairs, former supervising Minister, Ministry of Labour, having served from 2013-2015 and 2014-2015 respectively and current Chairman of PDP former Ministers’ Forum of Nigeria.

A practicing lawyer and a politician, he contested for Kebbi State Governor’s seat 3 times. He is a member of People’s Democratic Party’s Board of Trustees.

Kabiru was born at the Nasarawa area of Kebbi in Kebbi State to the family of Alhaji Tanimu. Like other children of his age and in accordance with the great custom of the wonderful people of Gwandu Emirate, Kabiru Tanimu was sent to the Qur’anic school, a step which was to later mould his character and prepare him for the numerous challenges of life. In order to equally acquire western education he was further enrolled into the then Nasarawa Primary School, Birnin Kebbi. Kabiru Turaki exhibited clear signs of a gifted child right from his days in primary school. He distinctively excelled in his academic work. He was very hardworking, obedient, brilliant and more than all these, he was very respectful. As a testimony of the commendable and sterling qualities of the young Kabiru, he was appointed as the Deputy Head Boy and Time Keeper of the school.

Kabiru Tanimu Turaki proceeded to the famous Barewa College, Zaria. Even though the school was full of brilliant students, he proved an exceptional person because he stood out in whatever he did. At Barewa College, Zaria, he was the Deputy House Captain, Suleirnan Barau House and President Young Farmers Club of the school.

In furtherance of his education, Kabiru went to the then College of Arts and Science, Sakata for his I.J.M.B. Again, it was another success story for Tanimu Turaki as he passed all his papers brilliantly. This earned him admission into one of Nigeria’s most respected Universities, the University of Jos, to read Law. He graduated with honour and proceeded to the Nigerian Law School, Lagos where he was called to the Nigerian Bar in 1986.

He is a Muslim, Hausa from Kebbi State.

Kabiru Tanimu Turaki is the first lawyer from Kebbi State and the entire former North Western States of this country to be elevated to the rank of Senior Advocate of Nigeria in 2002. Dan Masanin Gwandu.

In Kebbi State, he has contributed immeasurable to the betterment of lives of others through the  provision of scholarships, employment opportunities and other forms of moral and financial support and encouragement.

He was appointed Dan Masanin Gwandu by the Emir of Gwandu in February, 2002 in celebration of his achievements, and support for the development of his community. He was also conferred with the Traditional title of Zarumman Kabi by Argungu Emirate in 2012.

He is not only an astute Lawyer, he is also a leading politician, respected by many, adored by many and cherished yet many more. The politician in Kabiru was exposed since the politics of the second republic. He has been so active in the politics of Kebbi State.

Having greatly endeared himself to his people, it is little surprise that his fame and popularity cutting across all strata engenders the strong faith and confidence his people readily repose in him. Moreover, as a team player with exceptional ability to grasp. He has been a member of the National Executive Committee of the Nigerian Bar Association, Chairman Nigerian Bar Association Committee on the Judiciary, as well as member of the Governing Board of the Nigerian Judicial Institute. He was also appointed as the Chairman of the Nigerian Copyright Commission by President Goodluck Ebele Jonathan GCFR in 2012, a position he held until his appointment in 2013 as a Minister saddled with the responsibility of piloting the affairs of the newly recreated Federal Ministry of Special Duties and Inter – Governmental Affairs. Side by side with this, he was also appointed by ex-President Jonathan to serve as the Supervising Minister of the Federal Ministry of Labour and Productivity between 2014 – 2015. As a result of his dedication and team work, he was made Chairman, White Paper Committee on the Report of the Presidential Committee of Experts on Inter – Professional Relationships in the Public Health Sector. President Goodluck Jonathan, GCFR, also recognized Kabiru Tanimu Turaki, SAN effort and identified him worthy of bringing an end to deadly security challenge in the North – East by appointing him as Chairman of the Presidential Committee on Dialogue and Peaceful Resolution of Security Challenges in the North.

On graduation from the Nigerian Law School, Kabiru Tanimu Turaki opted to be a private legal practitioner. Unlike other lawyers who would remain permanent at home, Barrister Kabiru Taminu Turaki went to Kano where he became a Senior counsul with Alhaji Tijjani Abdullahi and Company (Solicitors and Advocates) in 1987. Kabiru Tanimu Turaki needed only two years to established himself as a force to be reckoned with in Kano and its environs. This solid resolution gave birth to K. T. Turaki and Co. in 1989.

As a lawyer, Kabiru Tanimu Turaki has practiced in virtually every court and tribunal in the country. From the Magistrate Court, High Court, the Court of Appeal, Armed Robbery Tribual, Miscellaneous Offences Tribunal, Election Petition Tribunals and even to the Apex Court, the Supreme Court of Nigeria. In all these, he has recorded successes that are certainly beyond the ordinary. He has held professional responsibilities that are too numerous to mentioned. However, it is worthy to note that Kabiru Tanimu Turaki is a retained external solicitor and legal adviser to many orgaisations throughout Nigeria.

The following year, Turaki served in the committee that reviewed the Northern States Penal Code Law in 1992.

When the Nigeria Bar Association was going through one of its trying moments, Kabiru Tanimu Turaki was one of those called upon to resolve its crisis in 1993.

He was a member of the National Political Reform Conference in 2004, as well as a member of the Board of Trustees of the Team Nigerian Trust Fund, a body that was set lip to galvanize private sector participation in the sports development and financing in Nigeria.

When the defunct Bank of the North was in murky waters, Barrister Turaki, San, was among the Intervention Board that was set up by the Regulatory Agencies (CBNI NDIC) to restore the Bank that was on the verge of collapse to profitability.

He was at various times a member of the Council of Legal Education, as well as member for the review of Investment Laws in Nigeria. He was also a member of the Ministerial Committee for the implementation of Reforms in the Nigeria Police Force as well as the Committees set up by the Body of Benchers to review the Laws Regulating Legal Practice in Nigeria.

His contribution to the development of the Law and the Legal Practice in Nigeria led to his appointment as a Notary Public by the Chief Justice of Nigeria, and his elevation of the prestigious rank of Senior Advocate of Nigeria (SAN) in 2002.

His political career began way back, in school. As a student, he was Chairman of the Caretaker Committee of the Students’ Union of SCAS, Sokoto. While at University of Jos, he was a member of the Senate of the National Association of Nigerian Students (NANS). This was in addition to being a member of the Students’ Representative Assembly of the University and President of the Federated Organisation of Sokoto State Students and President of Birnin Kebbi Youth Association (BIKEDA).

When he came out to the larger world, Kabiru did not relent but continued participating in politics. He was Secretary, Youth Wing, of National Party of Nigeria (NPN) in 1981. He joined United Nigeria Congress Party (UNCP) in 1996 where he stood as Kebbi State Gubernatorial aspirant for the party in 1998, Kabiru Tanimu Turaki joined All Peoples’ Party where he was member of its National Executive Committee and in year 2000 he was elevated to member of its Board of Trustees (BOT).

However, as paradigm of the political arena in the country shifted, Kabiru decamped to United Nigerian Peoples’ Party and contested for the seat of Kebbi State Governor in 2003. After the 2003 elections, he later decamped to PDP the same year and was the Party’s Kebbi State Gubernatorial Aspirant in 2007.

Following series of betrayals and numerous controversies, Kabiru decided to join ACN in 2011. This, however, did not last as he later returned to PDP tile same year. In 2014/15, looking at his tremendous achievements and wealth of experience, Kabiru was appointed Deputy Director General (North) of PDP Presidential Campaign Organization.

Alhaji Turaki, is presently a Member of PDP Board of Trustees (BOT). A position he was appointed in 2015.