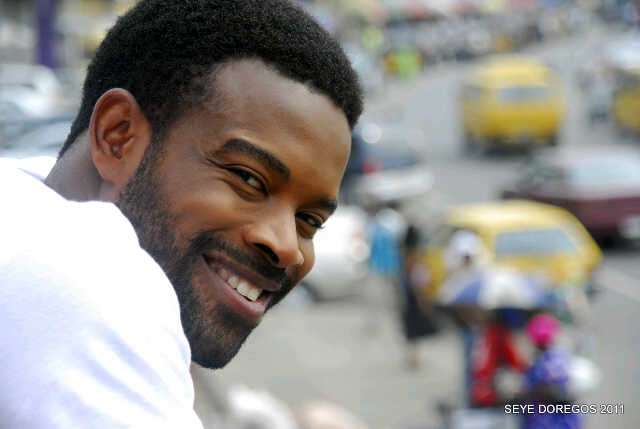 Top actor, Gabriel Afolayan is a talented movie practitioner. He is many things rolled in one. He is a good actor who acts both in the English and Yoruba sector. He is a Producer and Director who has produced and directed many movies. He also sings too. He is like his late dad, Ade Love who was a movie icon in his lifetime.

He is a member of the Afolayan movie family.

Talk about one big theatre family that plays big in the Yoruba movie industry and the Afolayan movie family will be mentioned promptly. This is because they are all children of the late Ade Love, whose real name is Adeyemi Afolayan.

The Afolayan movie family consists of 5 prominent actors and filmmakers from Igbomina-Yoruba ancestry in Kwara State.

This outstanding Theatre dynasty is made up of Kunle Afolayan, Gabriel Afolayan, Moji Afolayan, and Aremu Afolayan, all siblings.

Adeyemi Afolayan (Ade Love) was a prominent film actor, producer, and director in his lifetime. He was the patriarch of the Afolayan movie family. He was born in 1940 and passed away (22 yrs ago) in 1996.

He is the elder brother of popular actress, Toyin Afolayan, popularly called Lola Idije. Ade Love is the father of the 3 brothers and a sister, Moji Afolayan.

Toyin Afolayan, born in September 1959, became famous in 1995. At that time, Toyin Afolayan starred as Madam Adisa in “Deadly Affair.”

studied Theatre Arts at the University of Ibadan. In 2012, he won The Best Supporting Actor Award for “Tavier Jambari” in “Hoodrush.” Gabriel composes songs in “Love Ballad” genre. He is very brilliant and deep philosophically.

Aremu Afolayan is his brother. He is a well-known award-winning director and veteran film actor.

Moji Afolayan is Gabriel’s sister and the only daughter of Ade Love. The celebrated film-maker, actress, and producer grew up in Lagos. Moji attended Coker Primary School before she proceeded to Esie Iludun Anglican School. She did not want to become a teacher, thus, her acting career started.

Kunle Afolayan is also his brother.

Kunle Afolayan took some courses at the New York Film Academy. Since 2005, his career in Nigerian film industry has been on the upward swing. How has he found acting? “It’s been great”, he says. “I have been in it all my life. I was born into it.” But how does he juggle all the roles as an actor, a producer, a director, and a singer? How do all these work for him.? “For me, it is all about my essence, and the reason why I am doing what I am doing. I figured out that ok, this is my essence, and that is why I am here, on this surface is to serve humanity. I grew up with a strong legacy. I grew up in an artistic home where all these things are the norm. These are the things we do normally. So it comes to us naturally.

I grew up seeing all of these things done by my dad. By that, I mean filmmaking, music, acting, dancing. All of these things informed my own creativity as well. I will say it’s not by my power or might. It’s by Grace, and being able to fulfill my purpose. That’s all”. When he was growing up, did his dad insist or forced Gabriel to take up acting like he did? No. “He never did that. It was my instincts that made me go into it. Back in those days when we were in secondary school, we all wanted to be a lawyer or a doctor, but for me, I was very reserved as a kid growing up.

I don’t know if you know this man, Moses Ola Oluwa Adejumo, Olaiya alias Baba Sala. He was a very good friend of my dad. They worked hand in hand in the 60s, 70s, and 80s. I grew up in Ibadan. Our own house was not too far from his own house, at Mokola area of Ibadan. Each time I come back from school, I will always go to his house to see what they are doing and they always have one stage performance here and there. They do rehearsals. Seeing all of those informed about what I wanted to do”.

“My dad did not force me to do this. It was my own choice based on what I saw growing up”. How come the likes of his dad put in their all into acting at that time and we don’t see that kind of commitment on the part of today’s actors these days? “Everything revolves around passion,” he says. “When my dad was much younger, my dad was very artistic. His elder brother told some of us his children that most times when they go farming, he will be somewhere else playing flutes, or drums or dancing. Their own generation is quite different. People of those time put a lot of passion into it. They didn’t put so much attention on the money. My dad put in so much passion. He will put people together to perform, playing the Goje. Those that grew up at that time had a lot of passion for the job. Passion was key.”

How did his dad end up being nicknamed Ade Love? “It’s because he used to sing a lot of love songs most of the time. All his work used to revolve around love. He believes without love there is no humanity. Its only love that can connect us. His name is Adeyemi, but he adopted that name Ade Ife. He translated that Ife to love. Ade Love. He was a loving man. He is a guy that believes in love”. How does he juggle all what he does and each one does not end up disturbing the other? “It’s about time management,” it is by working with good management. Then, being passionate about what you do. I love doing what I do. I believe in Quality. I have a good management for managing my brand. They help me plan my time. When I am not filming, I am singing or I am in the studio recording.” Where was he born? “I was in Lagos, at the Island Maternity and I left for Ibadan in 1985 and I was in Ibadan for a very long time. Ibadan is quite calmer than Lagos. My mum took me to Ibadan to have a better life, and a better upbringing. Baba Sala’s house was just a stone’s throw away from ours and my father used to be there all the time.

It was like Home away from home, for me. My Primary School was United Native African Primary School, Ekotedo. That is in Dugbe. Then, I went to Polytechnic High School from there to University of Ibadan. So my life basically revolved around Ibadan. I can say I am an Ibadan boy, in a way.

But Gabriel is not happy with the state of the industry. He feels that Nollywood can do better than what it has done, if all the stakeholders work together, as a team. Right now, Gabriel is consumed by a passion to make all his fellow actors see reason with coming together to collaborate to do movies. He does not like the present situation in which many actors have become Producers overnight and they are all now engaged in a rat race, churning out substandard movies and yet they are complaining that the market is bad.”

“Truth be told, a lot of us movie practitioners are greedy. We all want to do many films, sell and make quick money, never minding whether the standards are good or not. “Gabriel is an advocate of collaboration. “If we collaborate we can make more money, together as groups, as teams not as individuals. The end result will be bigger jobs which will be more profitable for all of us. We need to keep thinking of how to keep the industry going. We need to keep pushing the boundaries. The industry is tough today. Yes. But it is because of our collective Greed, by that I mean the greed of actors and actresses. We can do better than what we are doing.

Some people look at the stage that we are now and say glibly it is a phase. But I say No. It’s not a phase. Many of us practitioners are stuck with the present realities and they think nothing can be done about it. That’s not true. If we don’t jolt ourselves, we would not leave this phase. There is so much greed. Everything is about me, myself and I. One person wants to do 3 films in one month. But if we come together, to work together in groups we don’t need to do too many movies. 1 or 2 movies is ok and everybody will be ok. We need to do collaborative works, I am an advocate of collaboration. It will help us. It will help the market and the industry. There is greatness ahead. How the industry can have that huge growth can only be through collaboration.”

He cites the huge success of Mo Abudu’s wedding party 1 and 2 as an example. “See the success of that movie. Its because Mo Abudu didn’t do it alone. She pooled many others into it. We have to collaborate. We can do a lot in the industry. It will reduce the frequency in which movies come out. The present mentality of movie practitioners has to change. The perspective has to change.

The way it is today is limiting. So, we have to keep pushing the boundaries. We need to engage our people. We all need to do collective work. What I am advocating is for there to be more collaboration. It will make people feel good about themselves and what they do. It will ensure quality performance. Quality stories will come out. It will bring about more professionalism since there are heavy investments. It will open doors for professionalism. The collaboration will make the industry look standard. Quality will come naturally because when 6 people come together to do a movie, pooling resources together it will be big. And the returns will be equally big as well. We need to come back to that thinking. What we have now is not encouraging. Our industry lacks collaboration and it shows in our lives. Enough of all these individual successes.”

I Took After My Late Dad In Many Ways – ADE LOVE’s Son, GABRIEL AFOLAYAN was last modified: September 10th, 2018 by Reporter