I Was Afraid Serena Williams Might Die, Says Husband 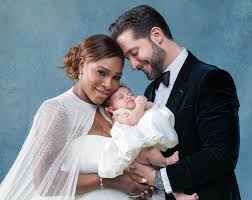 The husband of Serena Williams admitted Sunday that he feared the tennis superstar would die after giving birth to their daughter last year.

Alexis Ohanian, the internet entrepreneur and founder of Reddit, saluted the 36-year-old Williams for battling back from life-saving surgery to get within touching distance of an eighth Wimbledon title.

However, the American suffered a straight sets defeat to Angelique Kerber in Saturday’s final.

“Days after our baby girl was born, I kissed my wife goodbye before surgery and neither of us knew if she would be coming back,” Ohanian wrote on Instagram.

“We just wanted her to survive — 10 months later, she’s in the #Wimbledon final.”

The couple’s daughter Olympia was born in September but Serena then needed a series of operations to free her from the risk of clotting.

“Congratulations, @angie.kerber. @serenawilliams will be holding a trophy again soon — she’s got the greatest one waiting at home for her,” added Ohanian.

“Our family knows she’ll win many more trophies, too. She’s just getting started. And I couldn’t be more proud.”