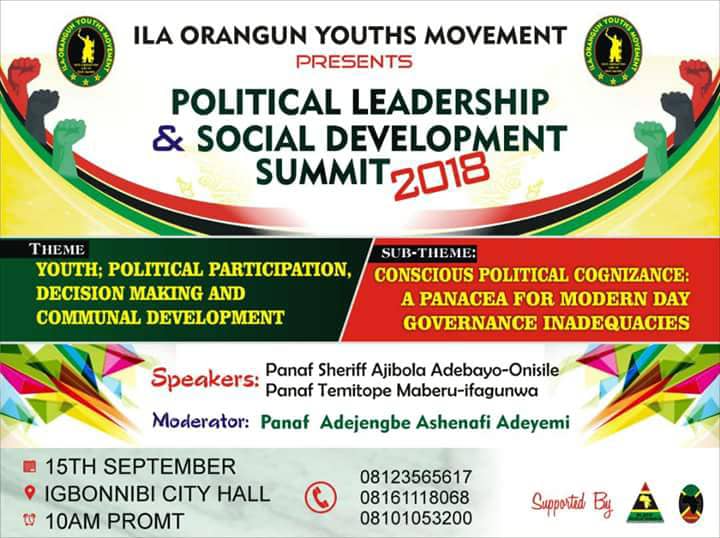 The Ila Oragun Youth Movement, IYM, is set to converge for the first Socio-political summit in Osun state, as its token towards the society’s political development and social advancement.

The event is billed to hold on Saturday, September 15, 2018, at the popular Igbonnibi City Hall.

The event shall be bothered on Youth Political Participation, Decision Making, And Communal Development.

The chief discussants shall include Panaf Sheriff Ajibola Adebayo-Onisile and Panaf Temitope Maberu-Ifagunwa and shall be anchored by Panaf Adejengbe Ashenafi Adeyemi.

Being the first of its kind summit, the acting General Secretary of the movement, Adewole Adekunle  stated that members have worked to ensure the programme guarantees an all-inclusive summit which will sensitize and educate the populace on subjects touching the socio-political aspiration of all concerned, that is an appropriate political enlightenment enough to create a yearning among the populace for a better representation and governance, and to appeal to the public to ensure violent free elections in 2019.

“The grand finale of the political summit which shall be held at the Igbonnibi City Hall, Ila Orangun, Osun State on the 15th of September, 2018 by 10:00am prompt has been designed in a way that your views, thoughts, and opinions about our general polity, out of your extensive experience, shall be aired during the summit session.

“These programs are fund intensive, therefore, for the greater good of our society at large, we hereby implore you to extend any form of assistance to the Movement towards the actualization of this summit.”, he added

The line up of activities include;

1) Traditional board games a day (Ludo, Draft, Ayo olopon)
2) Exhibition of artworks
3) Visitations to organizations and stakeholders
4) The day of the town crier
5) The walk of fame (Sensitization Exercise)
6) The summit grand finale

While inviting interested partners and supporters, Adewole also hinted that contributions toward the summit are also open for volunteers and other well-meaning citizens. 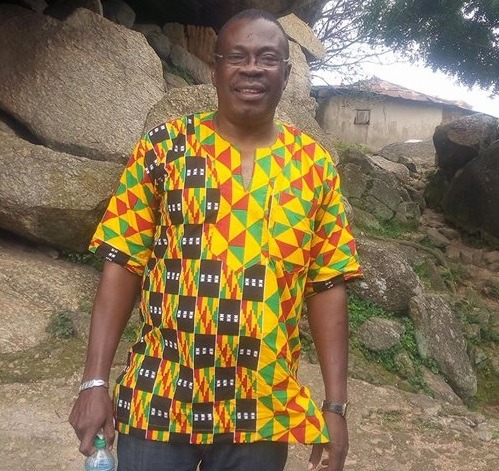 Panaf SAO Adebayo, One of the guest speakers