Home News Inside ABUJA Church Where The Rich Worship
News 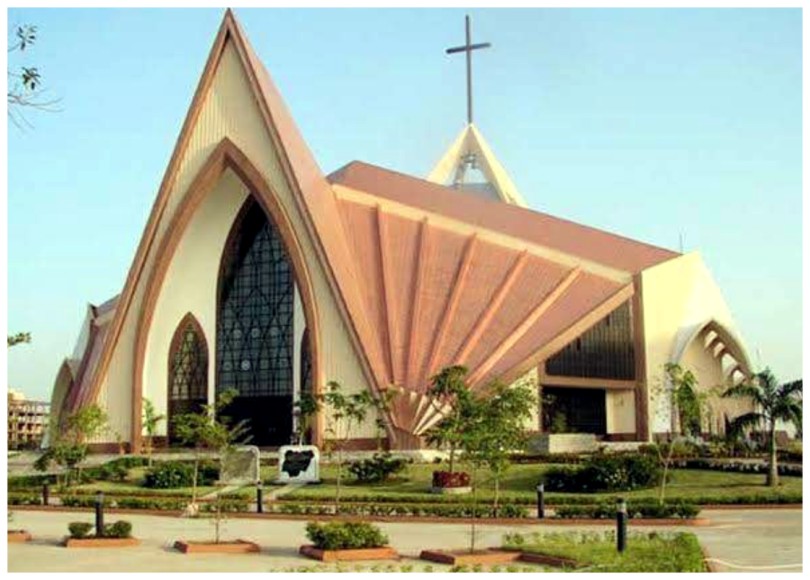 There is this church in Abuja that everybody is talking about right now. It is the most beautiful church in the nation’s capital. It is called The National Ecumenical Centre, Abuja. The Ecumenical centre is a place of worship which displays remarkable work of architecture and excellent work of craftsmanship. It is one church that is very popular in Abuja where the rich worship. What calibre of people do you expect to see worshipping at this church if not wealthy individuals. It is located in a neighbourhood where the rich live.

Even before the advent of the highbrow environment of what we see in that area now, the Ecumenical centre had been in existence for a very long time. Let us tell you authoritatively that the church was made popular by the high and mighty who worship there.

In fact, there are some big names like the Vice President, Prof Yemi Osinbajo, former President, Yakubu Gowon and many others who are regular callers at the church. Many of them are in key positions in government. You can not miss the church where it is located because of its location and its architectural masterpiece. It’s a cream coloured building which can attract any passerby. One other beautiful and interesting thing about the church is that every denomination can use the facility, not only members. Many big weddings and birthdays have taken place in the church over the years. This includes the wedding of VPP, Yemi Osinbajo’s daughter, Senator Smart Adeyemi daughter’s wedding and many others.

Also known as the National Christian Centre, the National Ecumenical Centre is one of the largest Christian centres in Abuja. The striking church edifice represents the neogothic style of work. It is more like a tourist attraction. Visitors to the centre can see the pivotal arches leading to the altar. The altar is placed in the central point in the church and devotees can complete a rotation in about just 10 minutes. The right-wing of the church has a pipe organ, from where the church choir sings, during the mass services. The windows have colourful stained galls windows in red, green and yellow. The centre organises every Christian ceremony and it is open for the public on days other than public holidays.

Guided tours are also available at the centre and the trained guides help visitors move around and get to know more about the history of the construction and the style employed in the construction of this beautiful edifice. The features and facilities at the church include a Conference Center, Religious school, Library, Offices and Residential facilities. First off, this tourist attraction is intended for all Christians all over Nigeria to worship in it, no matter your denomination and as such it’s an interdenominational church. It is a great edifice to behold and a very interesting attraction to visit.

It is mostly attended by the Christian elites within the Federal Capital Territory. Retired General Yakubu Gowon, who was once a Head of State of Nigeria was one of the prime movers in the completion of the church. It’s a structure to behold and inf act passes for a great tourist sight.

The copper roof shimmers in the sunlight, beckoning all to come and pray. This Gothic structure was created after Independence but was clearly influenced by the British. This is a large church filled with arches, columns and a magnificent organ. The pulpit rotates so that everyone in the congregation has an opportunity to see clergy during the sermon.

You can see the church from a distance as you approach the structure. It is a massive structure and stands out on the skyline. The site is nice for a short walking tour as you visit Abuja.

The centre which is an inter-denominational church was designed in a Postmodern version of the Neo-gothic style by Nigerian architectural firm, Darchiwork Group; located in Lagos. It was built by Italian construction firm Gitto Costruzioni Generali Nigeria Ltd.

The project was started around 1989, then lay dormant for several years until 2004, when the Christian Association of Nigeria organized a committee to ensure its speedy completion. The dedication, on 2 October 2005, coincided with the celebration of Nigeria’s 45th anniversary as an independent nation.

The dedication service was presided over by the Most Reverend Peter Akinola, the former Anglican Primate of Nigeria.

The church is built in a neo-gothic style and has several pivoted arches with a wide leading to the altar. The altar, placed at the centre of the church completes a full rotation every ten minutes. A pipe organ is fitted to the right wing of the church, close to which sits the choir. Stained glass windows which employ a simple but attractive mix of yellow, green and red colours can be seen all around the church. When not being used for Christian ceremonies, it is open to the public. Guided tours are available for anyone interested in having a look. In some cases, members of the public are only allowed to tour the church when accompanied by a guide.

Inside ABUJA Church Where The Rich Worship was last modified: January 19th, 2021 by Tayo Oyediji