We Are Investigating the Person Who Started #EndSARS Hastag – Police 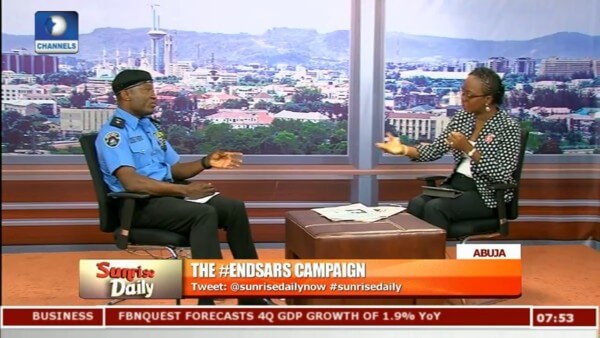 The public relations officer of the Nigerian Police Force, Jimoh Moshood has said the person who kicked off the #EndSARS trend is being investigated. He revealed this during an interview with Channels TV, on Tuesday.
Nigerians since Saturday have been sharing horrifying experiences they had in the hands of Special Anti-Robbery Squad (SARS) with the hashtag #EndSARS accusing the operatives of violating their human rights.
The stories included experiences of abduction, extortion, and murder. Moshood accused the man who started the hashtag identified as Jega Awosanya Segun, as working with “mischievous politicians”.
He said: “Somebody who had an ulterior motive put up #EndSARS, Nigerians should be mindful because the social media is very porous.
We traced the hashtag and traced it to mischievous politicians that are trying to create problem in the system that SARS is a stumbling block for them to achieve objective in the election and we are investigating this.
The owner of the hashtag is being investigated. We know freedom of expression is the right of every Nigerian and we are taking people up because of that.
It is quite unfortunate, I’m not mentioning any name but this same Jega Awosanya Segun is the owner of the hastag and we have seen his picture with various crop of politicians and we are investigating that for Nigerians to know the reason why.”
Watch video below:
We Are Investigating the Person Who Started #EndSARS Hastag – Police was last modified: December 5th, 2017 by Arinze Ago