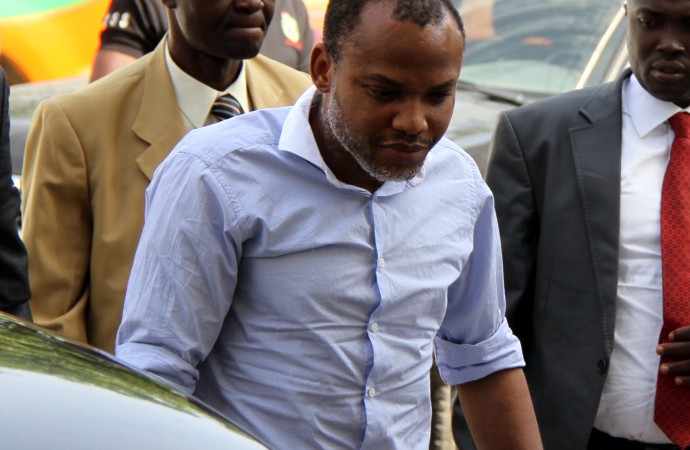 The leader of the proscribed Indigenous People of Biafra IPOB, Nnamdi Kanu’s trial was stalled on Monday in Federal High Court, Abuja, due to the absence of the judge.

An official of the court informed parties that the trial judge, Justice Binta Nyanko, had gone to attend Judges’ Conference within the city.

Nyanko had ordered Sen. Enyinnaya Abaribe, who stood surety for Kanu to appear in court on Nov. 20 to account for his whereabouts.

The order was predicated on report from Kanu’s Counsel, Mr Ifeanyi Ejiofor, who claimed on Oct. 18 that his client could not be found.

Abaribe, who was in court, however, told journalists that the military unsettled Kanu, adding that his whereabouts was not known to him either.

The lawmaker said it was on the basis of that uncertainty that he filed an application to withdraw his suretiship.

Mr Shuaibu  Labaran, the Prosecuting Counsel had through an application demanded that Kanu’s sureties be made to produce him to allow the trial to continue.

Kanu is standing trial on treasonable charges along with Chidiebere Onwudiwe, Benjamin Madubugwu and David Nwawuis.

AMIDST PRESSURE – MUGABE FINALLY AGREES TO STEP DOWN