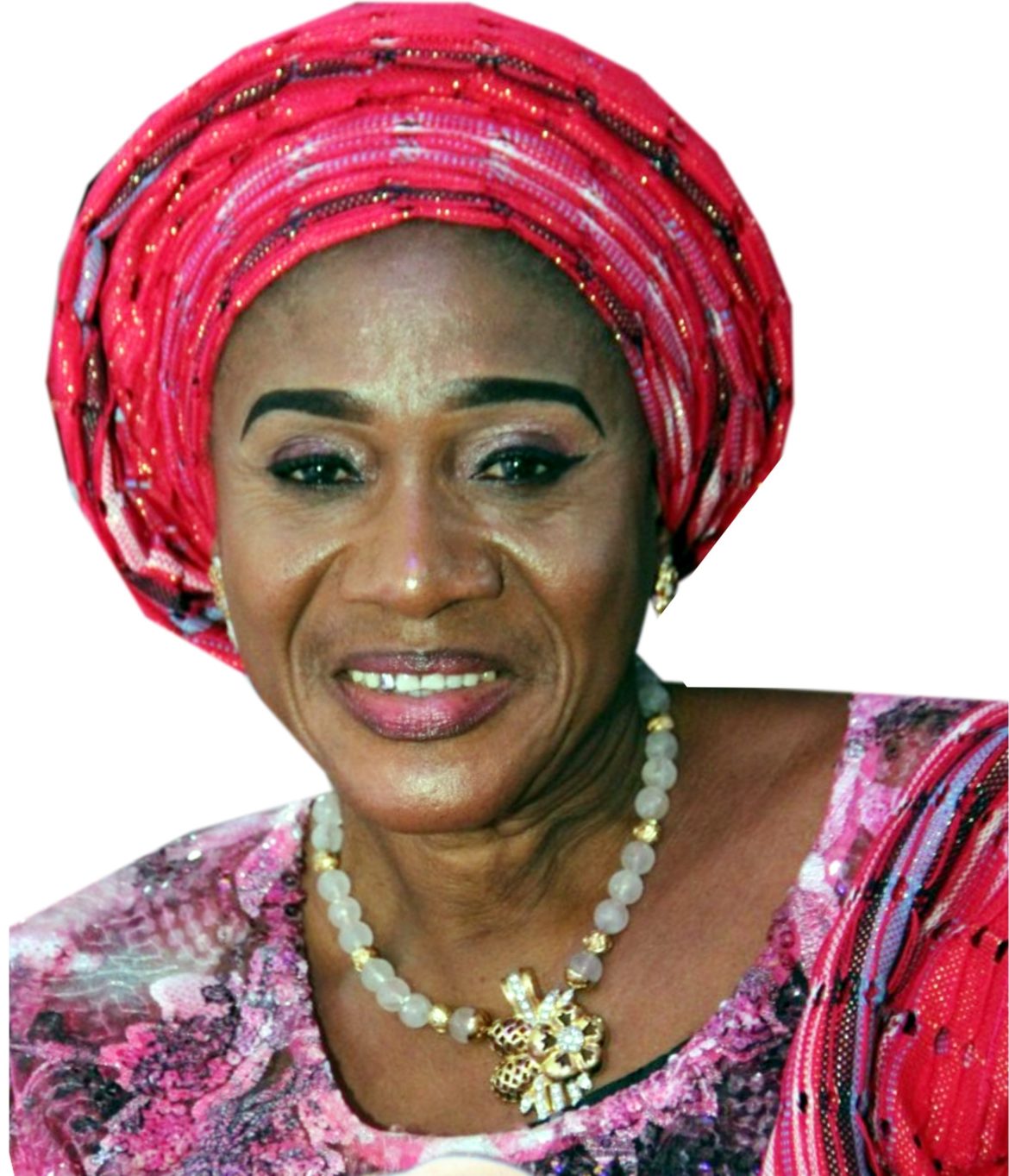 •City People Reveals How She Hit It BIG!

Have you ever met  Alhaja Fausat Akorede Alatishe, the beautiful Iyalaje of Ijebuland before? We can tell you that she is a humble and easy going businesswoman who has over the years become a rallying point for a lot of Ijebu women. They have come to take her as a mentor who is always there to guide and help them. That is why her depot/office in Ijebu-Ode is usually a beehive of activity, as many go to her for help and advice.

The big news is that Alhaja Fausat Akorede Alatishe is 60. She was 60 a few days ago and she celebrated it. In Ijebu, she is a big player in the scheme of things. The Awujale likes and respects her a lot. He usually refers to her as Akinkanju Obinrin.

She is also the Iyalode Bobagunte Obinrin Akile Ijebu. She is the wife of the Otun Giwa of Egbe Bobagunte Okunrin, Alhaji Gboyega Alatishe, who is the Aremo of Ososa and Otunba Badero of Ijebuland.

When the Awujale made her Iyalaje not too long ago he explained why he chose her.

The Awujale wrote Iyalode Fausat Akorede Alatishe a letter announcing the conferment of the chieftaincy title of Iyalaje Akile Ijebu on her. “By the ancient Ijebu custom, it is customary for the Awujale of ljebuland from time to time to acknowledge and recognise some of his citizens with Chieftaincy titles in appreciation of their contributions to the development our community or for the attainment of excellence and distinctions in their chosen career.”

“We observe with delight and satisfaction your commercial activities involving the employment of many of our youths since the past 17yrs. As a lover of our Culture and Tradition, we acknowledge and recognise your noble role as the Iyalode of Egbe Bobagunte Obirin Akile Ijebu being one of the most fashionable and prestigious Regberegbe age group of our time.”

“For all these and your other sterling qualities, too numerous to detail here, we wish to recognise and honour you with the traditional title of “Iyalaje of Akile ljebu”.

“It is hoped, however, that you will accept this honour as a mark of our appreciation and a challenge to do more.”

Truly so. She is an accomplished woman with a rich profile. He can tell you that. Alhaja Fausat Akorede Alatishe, (nee Mayungbe) was born 16th August 1959 at Porogun Idomowo Ijebu Ode to late Mr Motiriyu Adedeji Mayungbe (alias Mayor) and Alhaja Aolat Adunola Ireti Mayungbe, nee Otubu Lawal as the second of the four children. For her primary education, she first attended St. Saviours Primary School Italajoda and then proceeded to Ideal Girls School, Surulere Lagos. For her secondary education, she attended Royal Polytechnic College, Onike Yaba Lagos before attending Iganmode Grammar School, Ota. She finally completed her secondary education at Luba Comprehensive High School, Ijebu Ode, where she was made Assistant Head Girl and Hostel Prefect as a result of her being one of the brightest science students.

After her secondary education, Alhaja Fausat Akorede decided to join her mother’s grocery, commodity and provision business at Oke Arin Market, Lagos. She later got married to her friend in High School.  Alhaji Saheed Adegboyega Alatishe. She joined her husband and his mother, the late Alhaja Nuratulahi  Amoke Alatishe, in their drink and beverage business (Amokson Trading Stores) in 1984, after the closing down of the old Amokson Stores by her mother-in-law owing to her religious beliefs, Alhaja Fausat Akorede and her husband set up a Poultry Farm in Ososa and later a frozen fish business at Ijebu Ode. In 1990, a new Amokson Trading Stores was opened. At first, they started as wholesalers buying from various distributors in Ijebu Ode and its axis before getting accredited as Distributors of all drinks and beverages. Today, Amokson Trading Stores in which Alhaja Fausat Akorede Alatishe is the Managing Director, are proud distributors to the following companies; Guinness Nigeria PIc, Nigerian Breweries PIc, Nigerian Bottling Company (Coca-Cola), RITE Industries Limited, etc. The company currently

Alhaja Fausat Akorede Alatishe is one of the founding members of “Egbe Bobagunte Obirin Akile Ijebu” where she is the IYALODE. She is the AKEWEJE of Egbe Jagunmolu Okunrin Fehintade Akile Ijebu, Matron of Golden Ladies Club Nigeria and the Treasurer ofIjebu Interegberegbe Council. In 2003, she and her husband, Aremo Adegboyega Alatishe, built and donated an Officers Mess Complex to the Nigerian Police Force, Ijebu Division, Igbeba and funded various water projects at Police Stations and communities in Ijebu.

She is very humble, honest, trustworthy, hardworking, respectful, generous, loyal and unassuming. She is blessed with many children.

Let’s tell you about Iyalaje Akorede’s dad? Who is he? She is nee Mayungbe. Iyalaje’s dad is late Mr Motiriyu Adedeji Mayungbe (aka Mayor). He was born to the family of late Kasali Operekete Mayungbe and Morinatu Mayungbe (nee Arowogbadun Adinni) both of Idomowo Quarters Ijebu Ode on 30th December 1931. He started hie Elementary School education at Porogun School, Ijebu Ode. He later gained admission to Olu- Iwa College, now Adeola Odutola College, Ijebu Ode. He was nicknamed Mayor at the school by one of his friends. After passing out from the college, he proceeded to Lagos and got employment at UAC of Nigeria, Marina, Lagos where he worked for many years.

He married Miss Adunola Lawal Otubu in 1956. He left for the United Kingdom in 1962 to study Salesmanship and upon completion of his studies, he was employed by UAC of London where he worked till his return to Nigeria in 1966. On his return home, he was employed by G.B. Ollivant Nigeria Limited attached to BEAM section, Marina, Lagos where he worked until his death on the 17th of March 1968.

Mayor is one of the pioneers of Obanta Club of Ijebu Ode. Mayor was humble, charming, jovial and loving to all. He died at a very young age, leaving both parents behind. He was survived by four children of which Alhaja Fausat Akorede Alatishe, Iyalaje Akile Ijebu is one. We pray Almighty Allah to grant him Aljanan Fidaous.

In 1954, Alhaja Aolat went to Lagos where she attended the first Lagos Teacher Training College and bagged a Grade II Teachers Certificate. She later taught at St. Mathias Primary School, Lagos and Saviour High School also in Lagos to mention but two. She later joined the Ministry of Health and Social Welfare of the then Western Region. She later came back to Ijebu Ode as a Welfare Officer (Social  Worker). She then visited London to study Secretariat Course – Shorthand, Typing, etc at Pitman Secretarial College, London in the United Kingdom after which she later joined the association of Commonwealth where she served as Secretary for so many years.

In January 1967, Alhaja came back to Lagos from London and got an appointment as Secretary at  .B. Ollivant in the BEAM Section. She got married to late Mr Motiriyu Adedeji Mayungbe of blessed memory and they were blessed with children, one of whom is the new Iyalaje Akile Ijebu, Alhaja Fa Akorede Alatishe being installed today Ist April 2017.

After the death of her husband in 1968, Alhaja went into business, buying and selling provisions at Oke  Arin Market, Lagos and became a prominent distributor. Coming from a purely Islamic home, Alhaja  Aolat is very versatile in Quranic recitation and this made the Ijebu Muslim Community to turban her as the Iya Adinni ofIjebuland by Ijebu Ode Central Mosque as well as Iya Adinni of Idomowo, Porogun.