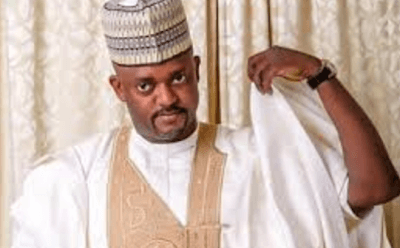 So I had a telephone interview on ChannelsTV’s Sunrise Daily this morning. About 5 minutes of stilted talk-time during which horrible network and static feedback prevented me from hearing Chamberlain Usoh’s questions clearly, and thus from responding in a concise or sequential manner. Next thing I know, there is a trending video of the interview posted by the station under a banner headline I consider utterly irresponsible.

Anyway, we in the Administration of Governor Yahaya Bello are used to the media stable in which Channels is tethered. Their unfortunate shenanigans have become comic relief around here. If we cough and they declare there is a tuberculosis pandemic in the state, we have learnt to take a sip water, smile and continue with what we are doing. No be today.

Were it for them alone, I would not be making this rejoinder. But when our failed, rudderless Senator, the one we all know as the Regret of Kogi, who has no constituency office and who only visits home as elections near to pick fights, takes up on that video and begins to wax songs and dance naked in the marketplace with it, well, then, we must reply. Men may sympathise with a madman on account of his insanity, but if he starts trying to burn down the village, they must restrain him – for his health, and others’.

It is important to understand the positions I espoused on that brief call. My reference to Kogi workers who are owed 12 months of salaries was not directed to those workers who were cleared in the first or second stages of our Staff Screening and Verification Exercise because those ones started receiving payments as soon as they were cleared. I meant those who were screened out by the earlier Screening Committees for one reason or the other. Those among them now cleared after the Kogi Stakeholders Congress which ended around 8pm last night are the ones still having delayed outstandings of up to 12 months some cases. However, the Government has promised to do everything within her powers to pay them in full this month.

To get them to this point after they were initially screened out, the  Government, Labour and other stakeholders conferred on the way forward and agreed to reopen the process to see if they could be helped in any way. A fresh Review Committee led by a seasoned team from the Administrative Staff College of Nigeria (ASCON) was therefore set up in January 2017 for this purpose.

Since no two cases are similar, this Review Committee had to physically listen to every worker who had been declared uncleared previously and who appeared before her. At the end of the 90 days alloted the Committee by Government to conclude her work, about 70% of those who came for review were readmitted into the workforce. Some were found victims of errors by previous Committees, but most were readmitted on compassionate grounds, and not because they were able to objectively overturn their earlier classifications.

To make that readmission possible Government had to bend over backwards on some offences prescribed in the Public Service Rules which are not ‘too criminal in nature’ (for want of a less inventive description). Such infractions as joining the service while still underaged, multiple declarations of age to put off retirement, stagnation (achieving over 8 years in a particular grade level with nowhere else to go), falsification of academic, work or other documents, mild to serious offences while in service, double employment and salary, etc.

It is among these class of people, who were slated for dismissal and sanctions before, but who have enjoyed clemency, that you will find those owed up to 12 months. It is to them I made reference. They were already out of the system. In some cases the Government owed them nothing based on the nature of the offences disclosed against them. Then the Government agreed to give them another chance. Following this soft landing approach accorded these category of formerly uncleared workers by the Governor, most are now back on the payroll and the Government has assumed responsibility again which was why my Boss directed they should be paid in full this month of May, including all arrears.

Yesterday evening we held a massive stakeholders meeting in Government House attended by all stakeholders where these issues were fully presented to the people. The Labour and Student unions turned out in full. None provided any counter to these facts. Instead, they commended Government for the amnesty and expressed their joy at the sanitation of the payroll, praying it meant genuine workers will now be promptly paid their salaries and emoluments.

This makes it the more unfortunate for Ranti Ojo Matthew, the TUC (Trade Union Congress) Leader to claim to still be on some uncleared list, and to still be owed 12 months backlog of salaries. As far back as the end of last year, Government records say different. He received his salaries up till December 2016 (including all his arrears which we inherited from the previous administration). He appeared on the uncleared list when it was discovered that he had failed to produce his original certificates for sighting, and that most withdrawals from  his salary account were from everywhere but Kogi State, in particular his place of work. A suspicious quantum of those banking transactions were also at times when he should be at his desk, working. Payments to him were thus withheld from January 2017 on account of this.

Luckily dirty him, after the initial bluster about privileges as a labour leader, he realised that no one who wished to remain a worker in Kogi State would be exempted from full screening and submitted himself and his documents for physical scrutiny. He also explained that he was making so much withdrawals from out of station because his duties as a labour leader involves a prodigious amount of travel. He has since been cleared, readmitted and will be receiving his unpaid salaries (3 months only) with everyone else in this batch.

It is also important to note that his NLC (Nigerian Labour Congress) counterpart, Comrade O.J Edoka did the needful promptly and was on the first list of those cleared. He has continued to earn his pay without undue interruptions.

Finally, on the allegations that May Day Celebrations were cancelled in Kogi State as a form of protest against the suffering of workers, the Kogi State Government is just hearing that one now. Government is not owing Labour a dime in statutory or customary contributions. Just two weeks ago at the formal presentation of the the Review Committee’s Report, Labour gave Government profuse thanks for clearing her outstanding and ensuring they will hold robust May Day events in the state.

It was the Labour leaders themselves who requested for a time out this year from Government because they claimed to have security reports indicating that forces external to them were working to hijack any public gathering today and wreak havoc. The Government of Kogi State is more than equal to the task of securing locations and participants at any event of any magnitude which they have approved, May Day not excepted. Just this morning I was in Government House when the Youth Corpers mobilised by Government for the usual May Day parades were asked to go home and rest because Labour would not be holding rallies.

Are these not the same Labour leaders who kept crying that their cooperation with the State Government to clean up the workforce was earning them the sobriquet of ‘weak’, ‘bribed’, ‘compromised’, etc from their peers outside the state? Are they not the ones who claimed they backed and participated in the Exercise because of their love for Kogi and the workers they represent who have been short-changed for too long in the past? So which one be say dem doam as protest? What is there to protest? That Government wants to keep what belongs to genuine workers for only genuine workers? I will advice my brothers to stand by their principles always and shame the devil. No matter the threat.

After all, did not Obakpolor Uzazakpo, the Court Jester of Old Benin Kingdom say, ‘If you tell the truth you die, if you tell lies you still die…?’ Or something like that. You know Obakpolor, though a young man at the time he was fooling himself for a living, had a problem gathering his thoughts and his wits so let us not expect too much sense from him, and take what we can salvage from his incessant babblings.

Come to think of it, maybe it’s not even that particular jester who made that saying. There were jesters aplenty those days, as nowadays. It may have been Mr. Bean. Or Mr. Ibu. Anyway, I suppose the jester who said it meant well, but as he was trying to say one thing, another thing was entering his mouth. It’s the curse of jesters.

Anyway, I stand by the promise of The Greatest Man Who Ever Lived. He said that that if we know the truth, it will set us free. This is great advice, and I commend it to all of us holding sacred trusts as leaders and servants of our people. If we also tell the truth that we know always, no matter what, it will set us free from the fear of man which can be a snare.

In concluding, and for the records, and entirely by the Grace of God, the Kogi State Government, after May 2017, would have completely paid all cleared workers up to date. Uncleared workers and ghostworkers will know themselves because they/their alter egos would have been expelled from the payroll, with or without prosecution for their crimes.

These  are the facts which the Government of Kogi State wants to put out to all people of goodwill. We will not be moved by the contrived umbrage of those who persist in fraudulent misinterpretation of events in Kogi State. They do so for their own selfish political, albeit, defeated, ends. These ineffective remnants of the late (and unlamented) buffoonery which almost wrecked Nigeria in the years of the locust from expecially from 2011 to March, 2015 can wail all they want, but they cannot turn the clock of our New Direction in Kogi State backwards. Despite the vicious, malicious and atrocious flood of negative Press they persist in unleashing on us through their captive media, we will continue to defeat their lies with our truths.

In closing, can those Elected to pass the National Budget and Confirm The President’s nomination’s get to work do the needful and pass the 2017 Appropriation Bill sent in nearly half a year ago. At least so that the Nation can move on.

Chief of Staff to the Kogi State Governor

‘Jest As I Thought’: Kogi CSO,  Edward Onoja Slams Channels TV over misconception of fact [READ] was last modified: May 1st, 2017 by Reporter

‘The lion of the east meets the tiger of the west’, FFK meets Nnamdi Kanu