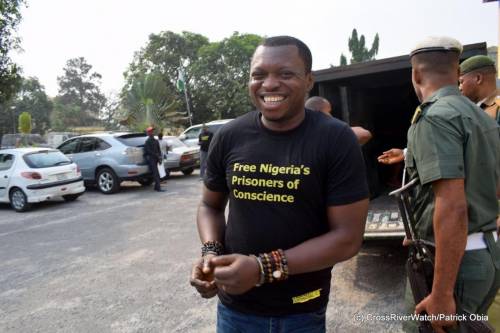 Agba Jalingo, the Nigerian journalist facing trial for alleged acts of treason, terrorism, cybercrime and attempt to topple the Cross River State Government, will on May 12, 2020 receive the Spaces for Change ‘Courage In Difficult Times Award’.

Jalingo, who spent 179 days in detention before being admitted to bail, said he was informed of the award via email by Victoria Ibezim-Ohaeri, Executive Director of S4C.

He said, “The organising committee of the Clement Nwankwo Annual Lecture on Civil Society, S4C a few days ago informed CrossRiverWatch’s Publisher, Agba Jalingo, that he alongside other activists in their prime will be honoured at the inaugural lecture slated for May 12, 2020 in Abuja.

“According to the mail, the award ceremony aims to ‘honour and recognise the contributions of pioneer activists (dead and alive), who played courageous roles ‘at the very beginning’, by forming and leading credible human rights organisations that pushed back against political tyranny, and whose selfless sacrifices inspired the institutionalisation of civic engagement at all levels of governance in Nigeria today.

“S4C said Jalingo is the ‘only young person to receive this honour alongside the pioneer activists of the 80s and 90s.”

The maiden lecture supported by the Open Society Foundation, will be chaired by Bishop Mathew Kukah and not only represents an effort towards preserving the sector’s iconic history, but also forms part of a broader effort to celebrate courage in difficult times and mobilise civil society actors to work together to defend the civic space.

Jalingo is billed to appear in court on April 6, 7 and 8, 2020 for the prosecution to open and close its case as ordered by trial judge, Justice Sule Shuaibu.

Meanwhile, Jalingo was listed in November’s edition of Time Newspaper’s #OneFreePressCoalition as one of the ‘Top 10 Most Urgent Cases Of Injustice Against Journalists’.

Amnesty International also declared him alongside activists Omoyele Sowore and Olawale Bakare as ‘prisoners of conscience’ in November 2019.