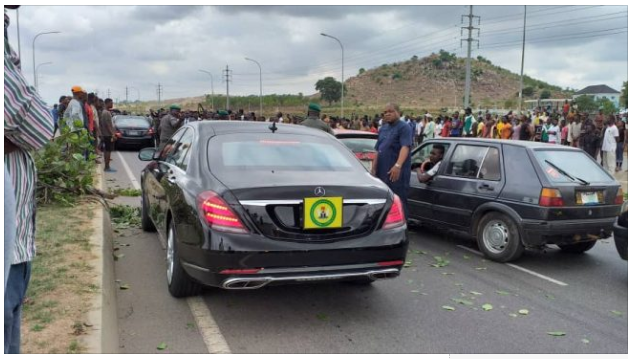 The vice-president was heading to the airport when his convoy ran into a barricade at the Goza village axis of the road.

Residents of Gbagyi village had converged on the spot, which is the major road connecting the airport to the city, to protest the alleged invasion of their land by the military.

The security aides of the vice-president tried to appease the protesters but failed, forcing Osinbajo to alight from his car.

Some of the protesters hailed the vice-president as he approached them.

Osinbajo sued for calm, assuring the protesters that their grievances would be addressed.

Apparently convinced by his intervention, the people allowed his convoy to pass but denied access to other vehicles.

Below are some pictures from the scene:

Just In: Angry Protesters Block VP Osinbajo From Passing Through Abuja Village was last modified: May 7th, 2019 by Damilare Salami