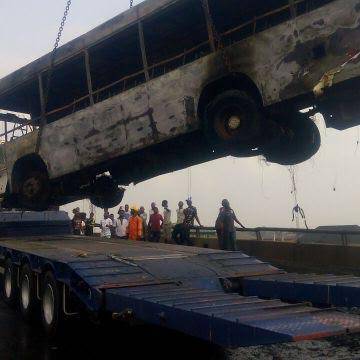 There is chaos on the third mainland bridge right now as one of the buses used for the bus rapid transit (BRT) in Lagos is currently burning on the bridge.

According to an eyewitness, the blue bus, which was heading towards Iyana-Oworo, caught fire just after Adeniji Adele axis of the bridge with the disaster resulting in chaos and heavy traffic gridlock.

It is unclear if there have been any casualties from the incident.

The officials of Lagos fire service and LASTMA are desperately trying to put out the fire and ensure order in the area.