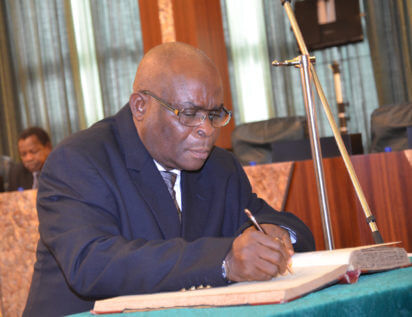 Chief Justice of Nigeria (CJN), Justice Walter Onnoghen has put a lie to the speculation that he has resigned.

The CJN’s spokesman, Awassam Bassey made this public in a brief statement on Friday morning.

Bassey described as “fake news” the speculation that Justice Onnoghen has resigned.

He said: “There’s absolutely no truth in the rumours making the round that the Hon. Chief Justice of Nigeria, His Lordship Hon. Mr. Justice Walter Samuel Nkanu Onnoghen, GCON, has resigned his office. It is fake news!

“The Hon CJN was in the office all through yesterday and sat in court.

“As part of his duties, the Hon CJN will be swearing in members of the 2019 National Assembly, Governorship & State Assembly Election Petition Tribunals tomorrow (Saturday 26th January 2019).“