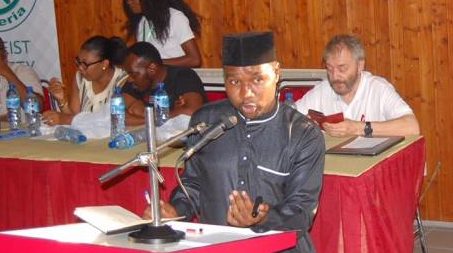 President of Humanist Association of Nigeria, Mubarak Bala, has been arrested by the police in Kaduna State for blasphemy.

Bala’s arrest followed a petition by a group of lawyers to the Commissioner of Police in Kano State to prosecute him for insulting Prophet Muhammad on his Facebook page.

The petition signed by one S.S Umar reads, “We are submitting this complain against one Mubarak Bala of Layin Massalaccin Bilai, Karkasara quarters, Kano.

“The said Mubarak was born and raised as a Muslim but for his own personal reason decided to leave Islam for atheism sometime in 2014 and has since then been writing stuffs on his Facebook page that are provocative and annoying to Muslims.”

A source said Bala was arrested by two police officers, who were not in uniform at his residence and is currently detained at the Gbabasawa Police Station in Kaduna.

A member of the Bala’s group, who spoke with SaharaReporters, said they were demanding for the immediate and unconditional release of the activist.

He said, “We at Humanist Association of Nigeria are deeply worried by the arrest and detention of our president, Mubarak Bala.

“Mubarak Bala will likely be handed over to the Kano State Police Command that will prosecute him for blasphemy, a crime that carries a death sentence under sharia law.

“We urge the Inspector-General of Police, governor of Kaduna, Mallam el Rufai, to ensure his immediate release.”