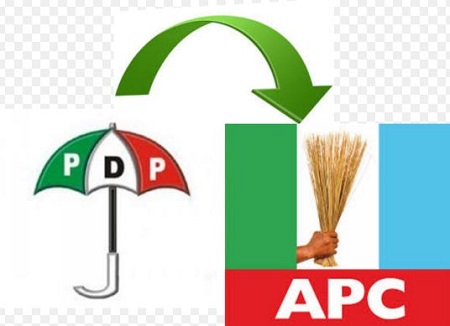 Kano state chairman of the Peoples Democratic Party (PDP), Rabiu Sulaiman-Bichi, has defected to the All Progressives Congress (APC).

This comes two days after the supreme court upheld the election of Abdullahi Ganduje as governor of the state.

The apex court dismissed the suit filed by Abba Kabir Yusuf, PDP’s candidate in the election, to challenge the victory of his APC rival.

Sulaiman-Bichi has not made any public pronouncement on his defection, but sources in that party said he defected alongside some members.

Sources told TheCable that he would meet with Ganduje later in the day as parts of plans to formalise his defection.

He was said to have accused Rabiu Kwankwaso, former governor of the state, of foisting Yusuf, his son-in-law, as the party’s candidate during the governorship election.

The former PDP chairman in the state, who acted as returning officer of the party, during the general election, is a an ally of Kwankwaso.

He was a commissioner for land matters during Kwankwaso’s first tenure as governor. After he defected from the APC to the PDP with Kwankwaso, the former governor nominated him as chairman of the state interim committee of the party.

This is the latest crack in the Kwankwasiyya movement since the exit of Hafiz Abubakar, former deputy governor of the state.

Nigerian politicians are known for moving to ruling parties. On Tuesday, nine members of the Imo state house of assembly defected to the APC after the supreme court sacked Emeka Ihedioha, candidate of the PDP, and declared Hope Uzodinma, APC’s candidate, as governor of the state.

Why It Will Be Difficult For JANDOR...

10 Possible Reasons Why SEX Is Lacking