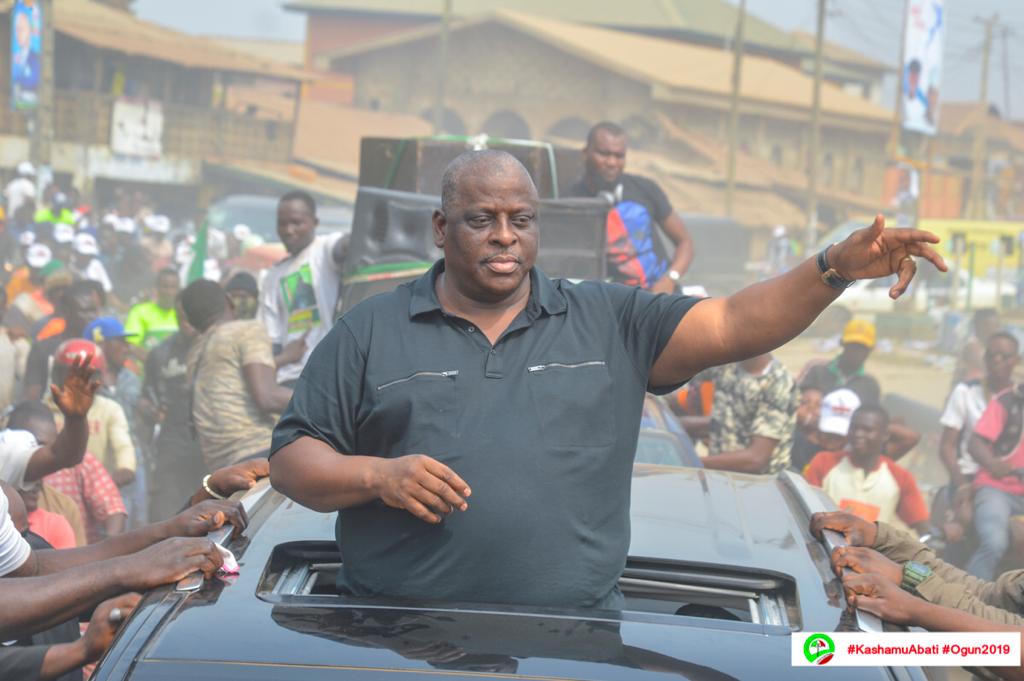 The Peoples Democratic Party (PDP) governorship candidate in Ogun State, Senator Buruji Kashamu, on Thursday literally shut down Ijebu North Local Government as he rounded off the campaign for the Presidential and National Assembly elections coming up on Saturday.

Senator Kashamu led a convoy of over 50 vehicles from Ijebu-Igbo through Oru to Ago-Iwoye and back to Ijebu-Igbo, all in Ijebu North Local Government Area, waving back at the crowd of enthusiastic men, women, youths and children who trooped out to wave, jump and cheer at him.

Speaking at the palace of the Ebumawe of Ago Iwoye, His Royal Majesty, Oba Abdulrasak Adesina Adenugba, when he paid a courtesy call on the monarch and other traditional rulers in the local government, Senator Kashamu said his ambition was motivated by his desire to uplift the people.

He decried the over reliance on allocations from Abuja, adding that as a successful entrepreneur his focus would be on job and wealth creation.

Senator Kashamu spoke of his plans to leverage on the nearness of Ogun State to Lagos in the Central, East and West senatorial districts through Mowe/Ibafo axis, Ogun Waterside and Agbara respectively.

“For instance, to curb medical tourism, I will establish a Specialist Hospital of international standards around the border between Ogun and Lagos states, near Ojodu-Berger. The hospital will be equipped with state-of-the-art facilities and manned by local and foreign experts. There would be no need for indigenes of Ogun State and Nigerians to travel as far as India and European countries for treatment.

“Indigenes of Ogun State shall be treated at discounted rates. My administration will ensure affordable healthcare services to the good people of Ogun State. The hospital will also contribute to the growth of the state as it will provide job opportunities for the people. We shall make Ogun State business-friendly for investors,” Senator Kashamu said.

Addressing the Council of Baales and Chiefs and the market men and women in the local government, Senator Kashamu sought their support for his aspiration, saying his administration will give financial autonomy to local governments and encourage Micro, Small and Medium Enterprises (MSMEs) to thrive by facilitating community and micro finance banks that would give facilities at no interest to associations, farmers, market men and women, among others.

Responding, the traditional rulers took turns to pray for him and wished him success in his quest to govern the state.

They described him as a fighter who is on a divine mission, adding that the Almighty God who saw him through the past battles would make him to come out triumphant in the governorship race.

The monarchs also declared that since he is the only governorship candidate of Ijebu extraction, they had no choice than to throw their weight behind him, especially given the support that he had garnered outside Ogun East Senatorial District.

Earlier, Kashamu also had an interactive session with the League of Imams and Alfas in Ijebu-Igbo.

Other party stalwarts on the trail include Chief Robert Adenaike, Prince Segun Seriki and Otunba Ola Kukoyi, among others.