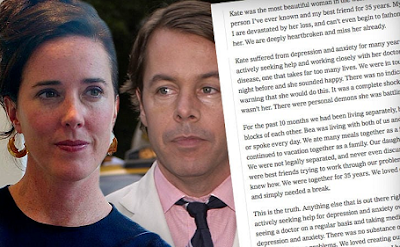 Kate Spade’s husband has finally spoken on the fashion designer’s suicide — confirming the two were living apart — and saying her death came as a total shock to their whole family.

In a statement to the New York Times, Andy Spade says, “Kate suffered from depression and anxiety for many years.

She was actively seeking help and working closely with her doctors to treat her disease, one that takes far too many lives. We were in touch with her the night before and she sounded happy.”

He continues, “There was no indication and no warning that she would do this. It was a complete shock. And it clearly wasn’t her. There were personal demons she was battling.”

Spade confirms the two were living separately for the last 10 months, but says they still took vacations and had dinners together for the sake of their daughter … he says they never discussed divorce.