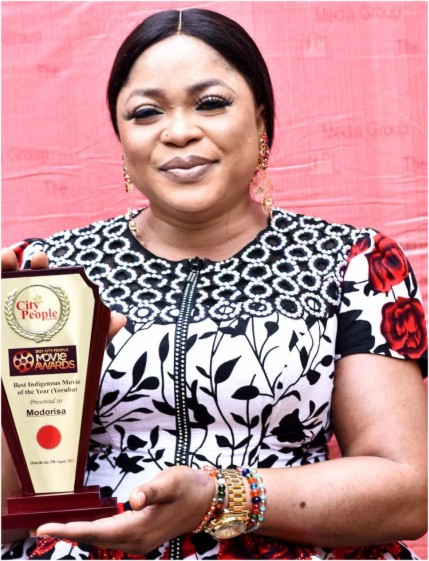 Star actress, Kemi Afolabi is among the top-rated actresses in the Yoruba movie industry. She joined the industry close to two decades ago and has featured and produced a good number of movies.

She told City People why she produced an all-female cast movie. What has kept her relevant in the industry for close to two decades. Below are the excerpts.

How do you feel about getting this award?

Haaa, when it comes to City People Awards, it is usually overwhelming and very real. It has been on for many years. I remember Kemi Afolabi being nominated severally. At some point, I won Best Actress (Yoruba category). You organise a lot of major events. I don’t really enjoy attending awards lately because most of them are scams and that is why, most times when I see my name, I don’t acknowledge it. Because at times, you will see clearly that it is not something worth celebrating. But with CityPeople, I always want to turn up because I know it is credible and you guys have been doing it for years and you are still here today. You have celebrated a lot of ‘A’-list and notable stars. And Uncle Seye has always been a great supporter of the industry. He has been with us all the years. God bless you real good sir and I pray that this company will keep growing from strength to strength.

How has it been keeping the Kemi Afolabi brand at the top?

I just want to give God Almighty all the glory. It’s been almost 2 decades now and we are still relevant. It has been mainly consistency like you just have to always get it right. Everybody is trying to carve a niche for themselves. So you need to be unique and that will definitely stand you out, and that is exactly what I have done and it has stood me out from the crowd. And for me, it has always been like that from day one, and it has been one blockbuster after the other, one award after the other.

Now, I sit down to pick script before acting in movies and that is why you can never see me, jumping from one location to another. Fine, you can’t showcase at once, I turn down a lot of scripts, because I want something very challenging and exhibit other parts of me, fans have not seen, not the regular thing every now and then.

Which role has been your most challenging in almost two decades of your career?

It’s my movie “Modorisa”, an all-female movie I produced. It’s an indigenous movie. In every average home in Nigeria, children are not taught the culture and tradition. Most parents don’t even speak the core language to their kids and it has been a struggle. In the movie “Modorisa” we went deep into the Yoruba Language, we used incantations. Once I set my mind to do something I go extra miles to do it right. The movie was challenging for me, I put lots of effort to see that it came out well.

It was the first indigenous movie showed across the cinemas. It was also showcased abroad. I am currently negotiating with Netflix.

What really inspired the movie “Modorisa”?

A lot of women have issues with their marriages and there was lots of criticism against the male gender. So, we came to a possible solution. “The main question in the movie was, can women really live without men?. That was the total summary of the movie. In the movie, women were in male attires, we also tried to know in the movie if without men living amongst us, if we can have peace as just females. So the result is in the movie.

If you are not an actress today, what will you be doing?

Haa, everything in my head is movie. I have lots of my friends and colleagues doing other business. But for me, I am a full-time filmmaker. I am presently going through some online training because I want to go into directing of movies too. If you want to remain relevant in the industry, you can’t be stagnant, you need to keep learning more.

You tend to have a dual personality, In real life, you are this cool, friendly and simple person, then on Instagram, you portray this no-nonsense personality so why?

(Laughs!!!) You see that Instagram, I wish I can delete it, it’s actually something I don’t really want to talk about now, because, there are many stuff going on now. You see people using the toilet, then the next thing, it is on social media. It really needs to be pulled down, so people can get their sanity back.

Yes, I can be extremely friendly and all nice, but at the same time, a no-nonsense person, I don’t keep grudges at all. Once you do something hurtful to me I will rather quickly just say it to you than go behind your back and start saying things. I like being at peace with myself and people.

How Governors Are Plotting To Produce The Next President