King Of Fuji K1 Now Fully Booked Till Middle Of 2022 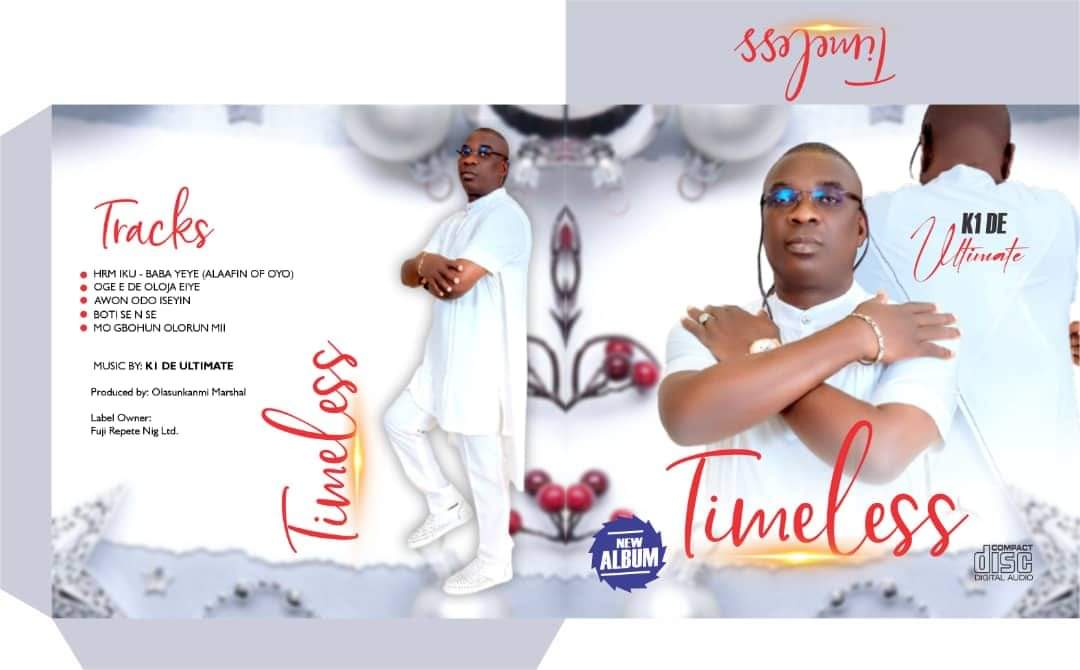 …As He Is Set To Drop New Album

Have you heard the big news? It is the news that K1, the King of Fuji music is set to drop a new album, anytime from now. All the lovers and fans of K1 all over the world are excitedly waiting for this melodious rhythm, this festive period. We can tell you that it is highly loaded as ever. There are 5 tracks in the album, namely: HRM Iku Baba Yeye (Alaafin of Oyo), Oge Ede Oloja Eiye, Awon Odo Iseyin, Boti se nse and Mo gbohun Olorun mi. The album is titled Timeless and will be releasedunder the label of Fuji Repete Nig. Ltd.

He has also completed work on his new Video, to help push his popular Ade-Ori Okin song which has been rocking the music scene for over a year now?

Going by the huge success that the song has received, K1 has decided to push out a video to back up the music. Not only that. He is also coming up with a dance step to match the song.

We can tell you for free that K1 is very happy that his song Ade-Ori Okin is doing well in the market. He told City People that it  “gladdens his heart that the Ade Ori Okin track has done so well in his lifetime and in my old age. Not many musicians enjoy that Grace.

“All I want to do is to increase the tempo. That song is trending madly. It is world acclaimed internationally. It is widly acceptable internationally. When things like this happen, for the artiste, it is always advisable to let the song keep trending until it gets to the peak.”

“You can’t replicate it immediately. So, we are working on the Video and dance step. Because we don’t have the video and dance step, everybody has been free styling on it. We are coming up with the video before the end of the year. We are releasing a well packaged musical video and the dance step to go with it.”Truly so. City People gathered that K1 is working with a reputable music company on this.

What inspired him to compose the song, we asked him? What also made him sing the song, Olofo lo nbinu Ologo? “Olofo lo nbinu Ologo has to do with how someone who has never achieved Greatness in his or her life, will see someone who is achieving Greatness and be envious. The lesson is to Always Rejoice with those God has done something good for, if not you can’t receive blessings. It is only Olofo eeyan that will be angry with someone God has blessed. That is the message.”

What I don’t have today, I can have tomorrow. When I have it tomorrow it is exciting to me. That is when I got mine. If you see what someone else has and you want it, pray for it and work for it.”

Talking of  Ade Ori Okin. Whats the message? What does Ade Ori Okin signify? “Ade Ori Okin is the crown on the Peacock. For you to understand it you have to go and buy the Peacock and study it and see it yourself. To every Peacock that comes to this world it comes to this world with a crown (Ade) Okin ti gbe Ade re wa from heaven. My song is not for every bird. Anytime I am on stage saying that I always put my hand in the middle of my head to show my fans that the crown is always on the head of a Peacock.”

“Each person comes to this world with his own unique crown. Religion tells us that everything you will become on earth you will begin to like it once you are born. You come with it. You are born with it Iseda, Akole.”

“Yes. Some people specialise in changing other peoples destiny (Kadara). That is why we pray against such devilish people. Awon a ba te ni je. Once they see that you are an Omo Ologo they can change it spiritually to harm you. That is why we need to keep praying”.

“In anything we do, we need the Grace of God. Grace comes from God. It is not by your doing. If you are successful it is not you doing it by yourself. Everything is by God. It’s God doing. Anu Ni Mo Ri Gba.”

“When a song is good, it is good. For a music to be good and for it enjoy wide acceptability, it is usually a combination of 2 things – the Lyrics and the Melody. The Lyrics must be rich and you have to lace it with beautiful melody. Once you do that as a musician, your song will command instant acceptability. Having a good lyrics and melody is what usually leads to instant hit.”

“That is what happened in the hit song Ade-Ori Okin. The message is deep. The message of the song is touching. The lyrics likens it to a true life situation.”

His popular song “Ade Ori Okin” was released during the first quarter of 2020 and it enjoyed massive acceptance. Even during Covid-19 in April, many who had their birthdays used it as a track to praise God for his fairness to them.

Even many elites, embraced the song more and this opened many doors of achievement for the Fuji King. This song “Ade-Ori okin” also made K1 the number one choice of the rich elites. Believe it or not, many rich elites rarely listen to Fuji music except it is K1.

The success of the song has been a big boost for K1’s music career. Once the song became a big hit, many of his fans wanted K1 to play at their parties.

And they are ready to pay any amount to have K1 perform LIVE at their shows.

Call him one of the most blessed artistes in Nigeria and you won’t be wrong.

K1 has become the most sought after musician in Nigeria. He is now the only musician who performs everyday of  the week, including week ends. It is as if no party is complete without King Wasiu Ayinde, as many celebrities don’t fix a date for their parties without first consulting the Oluaye Fuji to tell them when he can accommodate their event. What they do is to approach him with 3 dates in mind and they ask him to tell them when he can accomodate them.

As you read this, he has been fully booked till August next year. All through December 2021, he has been playing Back to Back. In January alone he has 15 shows. In February all his 4 weekends are fully booked. March is worse and in April he has more shows. City People has been invited to cover some of these events.

And wait for this! He doesn’t come cheap. For you to get K1 to consider your request for him to perform you will be looking at a cool N4 million, reveals a source. Some even pay as high as N5m to fit them in. But he can come down slightly if you are his friend or you come through someone he has tremendous respect for, after so much pleading. That shows how most sought-after he is.

What happens now is that many celebrities often let K1 give them a date. They will simply give him an idea of their desired month, and possible dates, and he will check his diary and give them a date that he is free to accomodate them.

He has also become the artiste that commands the highest patronage in terms of the huge sums they spray him at parties. On a good day, K1 attracts N3 million cash on stage. It can even be double the amount, Once the Big Boys and Babes know that it is K1 on bandstand they usually storm the party prepared with bulk sums. No Big Boy or Babe will step on stage to spray K1 without having at least 2m in his pocket. That assures you at least 30 minutes of non-stop praise singing.

Let’s also add that these days he even plays 2-times a day.

His last major work E Ma Yo Nu Si Mi remains the national anthem and it has been the dominant song for the past 2 years. One out of every 2 celebrity lady has it on her Facebook page. All the DJs are hooked on it. So, it is on their play list at clubs and parties. The track is danceable and it is an Alujo.

Why is everyone crazy about K1’s music? City People gathered that it is because of the unique nature of his music. He has over the years transformed his kind of music. Like he himself once sang, he has added a lot of sweetness to the way he sings. His composition also is unique. He takes his time to compose.

He has also become at peace with himself musically.

He is blessed with a good and unique voice. How did he get that inspiration to put together the song? What do you have in your stormach? Ki Le Gbe Si Ikun?

(Laughs) What I have in my stomach is the truth (Otito Inu) I am the same action man, very serious in all I do. I criticise myself. All I want to do, I subject them to criticism. I criticise them like somebody is criticising me. Whatever you are doing that you don’t do checks and balances, then you have lost it. I am not that perfect, but I have the Grace of God, and at the same time I have good people around me, that we deliberate together. I have no secret to hide, so I talk a lot in the presence of a lot of people. I don’t have a hidden secret. Nothing is hidden. God sees all of us. I have Oto Inu. I am a frank person. I will tell you as it is. The inspiration definitely must come because I make use of my brain at all times. I don’t like dull moments. I can’t be caged. I want to be in the midst of people at all times. I want to be free. I want to be in a place where I can move freely. All that happens around me keeps me going.

THAT THERE MAY BE JUSTICE FOR KEREN AKPAGHER…