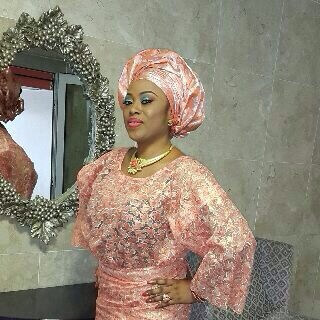 Exactly 2weeks after Chief Kessington Adebutu’s wife, Koforowola, celebrated her 40th birthday, the pretty babe who owns the heart of  Premier  Lotto boss, is set to again roll out the drums. The entire Adebutu dynasty is in a very joyous mood  as Kofoworola is set to become Otun Yeye Oge of Lagos.

The event which is going to take place on 7th of July, 2017 and will shake the whole of Lagos to it foundation as Chief Adebutu is leaving no stone unturned to make the celebration a grand affair.

Oba Rilwan Akiolu is the Chief Host of the event and there is no doubt that all is set at the Igan Idugaran palace of Akiolu to give the coronation a palatial splendour.  All his traditional white cap Chiefs are also prepared to install the New Otun Yeye Oge, she will be Deputy to Chief Opray Benson, who is the Yeye Oge.

As expected, the entire Lagos Social circle has been fully informed of the coming party and members are fully booked for the date. Though, Aso-Ebi was not picked, but celebrity ladies are tinkering with a colour theme for more than  1,000 guests.

As usual, Mrs. Caroline Adebutu, who is Chief Kessington’s first wife, will also be throwing her  weight behind Kofo. Mama loves Kofo to the bone as the latter respects and adores her much.

This has also made Mama’s children love Kofo the more. The entire Adebutu’s children will be led by Hon. Ladi and the  Beere will not be left out”. If Tope Adebutu, the new daughter-in-law of President Olusegun Obasanjo is back on time from her honeymoon, she will also be in attendance with her husband,  Olujonwo.

Popular musician has been billed to perform and will also be serenading the large guests.

Competent  food vendors have been handsomely paid to feed guests with choice of food, while a good event planner, who knows her onions, would be in charge of the planning.

Kofo’s younger sister, Bisola, who runs one of the biggest cocktail and small chops businesses, is also leaving no stone unturned to make sure the event has a toga of excellence. She has been up and doing since the  last 3 weeks to make sure her elder sister, Kofo, has the best party in town. The celebrator’s  husband, Chief Kessington, is not just spending big to make sure the event is grand. All his friends such as Chief Rasaki Okoya, Chief Samuel Adedoyin, Justice Olusola Oguntade, Sir, Olu-Okeowo to mention few are going to storm the event. Mrs. Sade Okoya and Mrs. Dupe Oguntade are also going to support one of their own.

Her closest friend, Mrs. Obosi, who runs the biggest luxury contessa shoes stores, in Lagos, will also show support to Kofo.  Don’t forget she is the pretty wife of Mega Lektris’s boss, Mrs. Chris Obosi, who owns classic FM, beat FM and others.