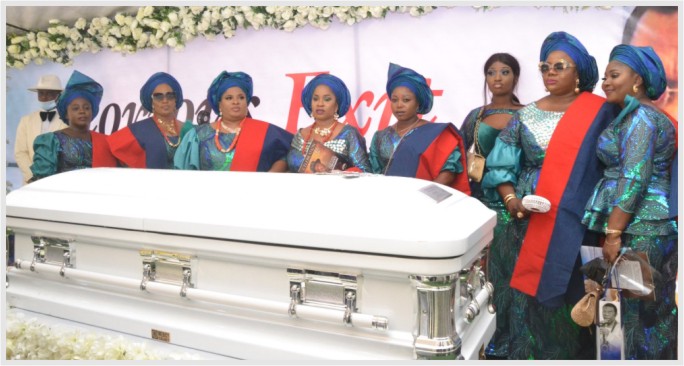 On Friday, 15th Jan, 2020, one of the foremost, prominent members of Celestial Church of Christ, Evangelist (Prophet) Samuel Olumuyiwa Oshodi, was laid to his final rest in Lagos. The event was the talk of town, considering the role he played in Christendom when he was alive. The entire Oshodi family and Celestial Church of Christ Ayilara Parish came out enmasse to pay him the last respect.

The Tafawa Balewa Square (TBS), Onikan, played host to a mammoth crowd to its very root on that day. It was one event that made celebrities from all over the world to storm TBS, to mourn and celebrate with popular Lagos celebrity lady, Funmilayo Shoyinka, her husband Hon. Tunji Shoyinka and her siblings. City People’s Tv Head, SUNDAY ADIGUN, was at the party and brings you exclusive gist.

ABOUT THE TALK OF TOWN BURIAL

It took a whole 3 months to celebrate the life and times of the great servant of God, Evangelist/Prophet Samuel Olumuyiwa Oshodi. The celebration of life started since November 9th, with Online Prayer and songs service, with the participation of many people both in Nigeria and those in the diaspora, via zoom. Meanwhile, another Service of songs was held on Thursday, December 10th, 2020 at Celestial Church of Christ VOJC Parish in London and another service of song was held on Friday, December 11th, 2020 at Celestial Church of Christ Metropolitan Parish in USA. What about the Ephpatha crusade tribute night that was held on Friday, 18th December at CCC Ayilara parish, or UK Tribute Night of Never again that was held at CCC Voice of Jesus Christ Parishes in London, Coventry and Lagos via zoom? All the arrangements were made and executed just to appreciate God for a life well spent by Evangelist/Prophet Samuel Olumuyiwa Oshodi. And for the final burial, the service of songs and tribute held on Wednesday 13th January 2021 at CCC Ayilara Parish in Lagos. It was followed by lying in state and family prayers the following day, 14th January 2021 at 5 Ayilara Street, Ojuelegba Surulere, Lagos. and Christian wake on the same day at Tafawa Balewa Square, Onikan. Lagos.

The Burial Service was held at Tafawa Balewa Square on Friday, 15th of January before the remains of the deceased were finally laid to rest at Ikoyi Vault and Garden.

After the funeral service and the deceased had been laid to his final home, all guests converged for the exclusive reception at the same venue, Tafawa Balewa Square, where 2 giant canopies were erected. The atmosphere was cool, the setting was right and there was a touch of class everywhere. Starting from the arrangement of the whole event, where all tables were tagged, making it easier for guests to locate their seals and 2020 people. Not only that, every table was with its drink-buckets displaying almost all brands of drinks, including water. Everything was arranged in such a way that you don’t have to know anybody before you were attended to, no matter whose guest you were. Everybody had fun all through.

As fondly called, X1 for the future is one of the Fuji Bands making waves now, ably led by Ganiyu Ayinde. He’s one of those who sing like King Wasiu Ayinde. He was the musician of the day and he did wonderfully well with his performance to the excitement of all guests. His cool beats and lyrics enthralled guests into a path of happiness. He sang praises of all the children of the deceased and many celebrities sprayed him with bails of naira notes.

BETWEEN THE SECURITIES, AND THE EVENT PLANNERS

The security of the classy event was top notch. Right from the point of entry into Tafawa Balewa square, to the event ground, everything was on point. The security guys from Big brown Security Agencies sure know their job. and they also made sure that everyone observed and obeyed all the Covid-19 preventive measures before gaining entrance into the event.

Among the celebrities who dazzled at the party was the popular businesswoman, Bismid. She dazzled everyone when she stepped in with her friends, in their Aso Ebi. They glowed and made every head turn. And what about Olori Jafo and her friends, they were the cynosure of all eyes. Olori Jafo’s expensive beads were loud and they blended with other jewellery to compliment her outfit.

One of the important dignitaries who came early, even before the arrival of the host and her husband was the State Chairman of Lagos PDP, Hon. Doherty. He came in the company of some of his friends and aides both male and female, and you could easily tell that he has a very close relationship with the family especially with Hon Tunji Shoyinka, because he was very much around, almost till the close of the event.

Though Hon. Tunji Shoyinka, the House of Rep Member, representing Surulere II, was the host, yet he played a great role in making sure that all the guests were comfortable. He was seen moving from one table to another asking guests what they needed and offering drinks to some of his friends. He passed all the due protocols at this event, probably because he’s the son-in-law of the deceased and does not want to be found wanting.

WHITE HOUSE MEMBERS SUPPORTS THEIR OWN

Another group of people who surprised people with their turnout was the popular White House Members. They came in, their numbers, dressed gorgeously in their white native attire with uniform caps. They all came to support their own. Among members who were sighted are Alhaji Monye, Kunle Atoyede, Chief AJAYI, Otunba Wale Lawal, Taiwo Adekanmbi, Otunba Lukman Akinyemi and many others.

if you have met him at any event before, you would know Mc Aditu is one of the able hands who know their onions when it comes to compering event. The young man is a broadcaster at Bond Fm and he sure knows out to make his guests feel good.

They almost turned the burial reception to a fashion parade. They all looked so beautiful in the Aso Ebi. they complemented it with beautiful and expensive jewellery. Check out their shoes, you need no one to tell you that celebrity women are the life of any party. Here is the list of the celebrity women who made heads turn to behold their beauty at the event; Tawakalitu, Mrs Alaba, Titi Bello, Bose Uk, Olori Faronbi, Kehinde Balogun, Foluke Oyewa, Folukemi Obasa, Alhaja Osunsanya, Abiola Harjoke Gold, Oritoke Rauf, Keji Atoyegbe, Alhaja Olumegun, Opeyemi Jolayemi, Naomi Abodunde, Labi Amodu, Mojisola Kasumu, Alhaja Aderoju, Alhaja Bintu, Morayo Eserokpe, Mrs Adesope, Moronke Olawuyi, Morenike Ajulo, Kamlat Kazeem, Rukayat Jimoh, Alhaja Eletu Odibo, Atinuke Ogbevire and a host of others.

Ice code remains one of the best when it comes to serving drinks at any event. Its style of operation has always been the best. What about its staffers’ mode of dressing? Always stunning in their corporate black and red outfit and they were ready to serve whenever you beckon on them for drinks.

The beauty of every corporate and classy event such as this could not show without ushers. And one of the best event ushers you could think of is DETERON USHERS. The pretty ladies sure know how to make guests enjoy every moment. Starting from welcoming of guests to their seat and attending to their needs were all that DETERON USERS took care of.

These two catering outfits were in-charge of foods. And they did well with their various assorted food. They had all kinds of foods you could ever think of and they were very much ready to serve their guests, once the request is made.

READ ALSO: 100 NAIJA LADIES TO WATCH FOR OUT FOR IN LONDON THIS YEAR