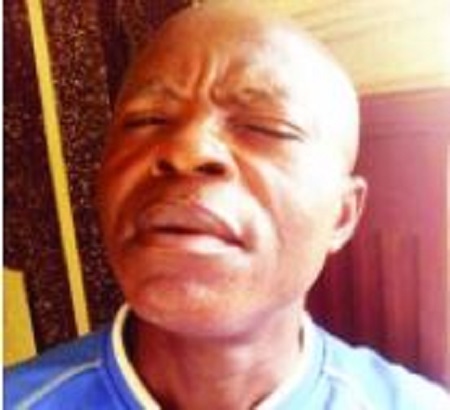 Christopher Chimezie, a commercial bus driver, has been living in pain since he lost the use of his left eye after a soldier reportedly attacked him at Abule Ado bus stop, at the Mile 2 end of the Lagos-Badagry Expressway, Lagos State.
Punch Metro reports that the victim had parked to pick passengers at the bus stop when the unidentified soldier repeatedly hit him with a baton in the eye.
He was said to have visited different hospitals in Lagos before he was referred to Ancilla Catholic Hospital, Agege.
After a surgical operation at the hospital, the victim’s condition reportedly became worse, as he started experiencing pains in the eye, which later went blind.
Chimezie, who spoke with Punch Metro on Thursday, lamented that since the eye was operated on in November 2016, he had been placed on drugs.
The 54-year-old Imo State indigene said he regretted that he did not get the name of the soldier that started his ordeal.
He said, “The problem started on Tuesday, March 22, 2016. I drove to the bus stop to pick some passengers. I was in a hurry to go to church that day and so, I didn’t spend up to one minute at the bus stop.
“As I was driving out, I saw the soldier coming in my direction with a baton in his hand. I was not worried since I knew I didn’t do anything wrong.
“I was caught unawares when he started hitting my eye with the baton. He said, ‘Come down and fight me’. I have never met this man in my life and I didn’t have any issue with anyone on the road. I was also not causing any obstruction.
“My eye went blank and people brought me down to pour water on me as blood gushed out of my left eye. The soldier disappeared after the attack.”
He said some residents took him to a private hospital, from where he was referred to the General Hospital, Badagry.
He noted that afterwards, he was referred to different specialist hospitals, adding that the eye problem became worse.
After reportedly visiting four hospitals, he said he was advised to go to Ancilla Catholic Hospital.
“ I was told at the eye centre of the hospital that my eye lens was damaged and I would need an artificial replacement.
“After the surgery, which was done on November 22, 2016, I could not see again with the eye. I started having itching, headache, tears and some movements in the eye.
“The hospital told me that they discovered that I couldn’t use the artificial lens because of damage in another part of my eye. I have been living on drugs since then. The pain relievers I am taking is affecting my health and I have been warned that it can affect my liver,” he added.
Chimezie, while lamenting that he had spent over N400,000 on the problem, said he had become bankrupt and could barely feed his family.
He said his concern was no longer about seeing with the eye, but stopping the pain, which he said the hospital was nonchalant about.
When Punch Metro contacted the hospital, a receptionist, who identified herself as Sandra, asked our correspondent to call back.
About 30 minutes after when our correspondent called back, another female receptionist, who refused to identify herself, demanded a recount of the complaints.
She subsequently said the hospital would not talk without the presence of the patient.
She said, “Are you related to him? Are you the patient? We cannot discuss anything concerning our patient with anybody. I am not even aware of any case like this; we don’t have any case like this. If you want to find out anything, please come to the hospital with the patient.”
When Punch Metro advised that the receptionist speak with the medical director or a doctor at the facility before making any conclusion, she refused.
The spokesperson for the Nigerian Army, 81 Brigade, Sydney Mbaneme, did not pick his call and had yet to respond to a text message on the incident as of the time of going to press.
How Lagos Driver Became Blind After Nigerian Soldier’s Attack in Lagos was last modified: July 7th, 2017 by Arinze Ago