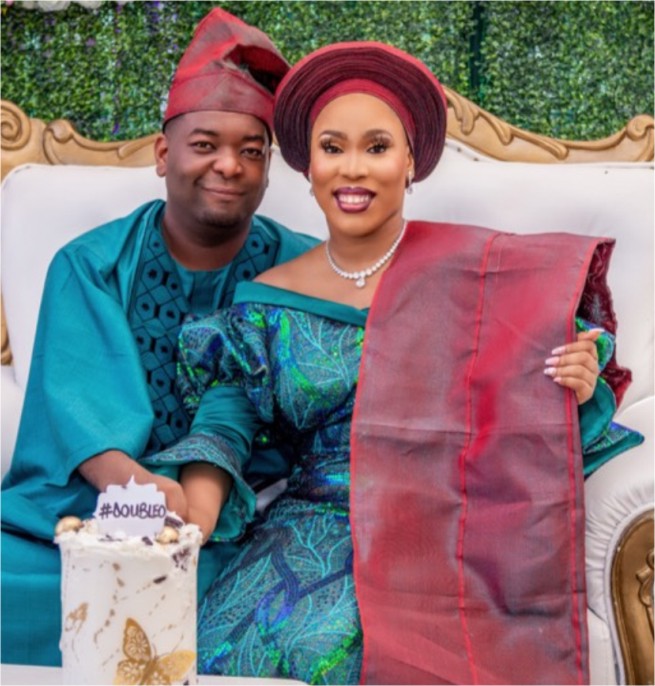 Saturday, April 10, 2021, was a special day as it will forever linger on the minds of two top Lagos entrepreneurs, Tobiloba and Adesope, as both took a bold step of faith to commit their future to each other. The event was classy and had top society celeb men and women in attendance.

The families of the late Otunba Charles Goriola Odunukan (C.G.O) and Mrs Anthonia Obiajulu Odunukan and that of The Late Dr Adebiyi Adetokunboh Edun and Mrs Iyiola Olatokunbo Edun, close and distant relations, colleagues and friends all gathered to witness the traditional wedding of the two love birds in Lagos. Judging by the class of people in attendance, the music, food and razzmatazz displayed, were proofs opulence that the event was, indeed, a definition of class and affluence.

The beautiful ambience at one of the best event centre in the heart of Lekki – Orchid Hotels. Lekki-Epe Expressway with no more than 100 guests in attendance, as they complied with the social distance regulation.

There were hand sanitisers at the entrance of the auditorium for every guest. It was, indeed, necessary considering the coronavirus pandemic troubling the whole world at this time.

The colour of the day was gold and magenta. Society women rocked several luxury fabric in gold and white and matched it up with a white Aso-Ebi headgear. The colour combination made the gathering literally looked-like a gathering of angels in heaven. To say it added spice and beauty to the already well-decorated auditorium is an understatement.

One of Nigeria’s leading Owanbe band, Ebony Band added spice to the event as it rendered classy numbers to entertain guests all through the event. Ebony band serenaded everyone at the event with different genres of music; ranging from rock, afro, old school, highlife to hip-hop.

The parents of the couple beamed with joy as they joined and shared the joy of their children in matrimony. The mother of the bride and mother of the groom adorned the same exotic gold and black lace with a blend of luxury jewellery. They matched it with luxury brown headgear. It was obvious that the mothers-in-law are highly fashionable as they rocked luxury jewellery and clutched expensive purses. It was their day and they stood out.

The groom, Adesope Edun’s grand entry was another talking point that afternoon. He wore an exotic brown suit his group of friends rocked white and black. The groom is stylish. He rocked a luxury wristwatch and shoe. The coral beads sat so well on his neck and wrist.

He was so calm and collected. He stepped in like a royalty as the Ebony band enthralled him into dancing. He was asked to greet his in-laws and take pictures with them. He complied with all the instructions of the anchor as if he had already rehearsed from home. He made no mistakes with all the questions asked and his friends were there supporting him both morally and financially. The expectation was indeed, high for Adesope.

After the rites had been completed, he moved to a specially designed seat for the couple with his queen.

The bride, who is as fashionable as her mum, stepped out in style. She rocked luxury jewellery, shoes and bag. She stood out in style. Her friends in Aso-Ebi rocked burnt silk to match. She danced with her friends as her family members surrounded and pasted her face with cripsy Naira notes..

DJ Shumzy, one of Lagos’ fast-rising disc jockey also joined the party. Of course, the Ebony band was more than capable of thrilling guests but DJ Shumzy also added spices to the already lively show as the two families went to appreciate each other.

The event was planned by Charlie’s Events, Wedding dress and accessories were made by House of Xtyna, The groom’s outfit was made by MCTos Ventures, Meal was provided by Sweet and Savoury Caterings. Aso Oke and Aso Ebi were supplied by BIMMMS 24. The event’s anchor was MC Bravo, Sean Barbeque provided grills. Reniks Cocktail, Charlies Events. Laredo Chops and many other food vendors served with pleasure.

Buhari May Undergo Chemotherapy Treatment For 6...