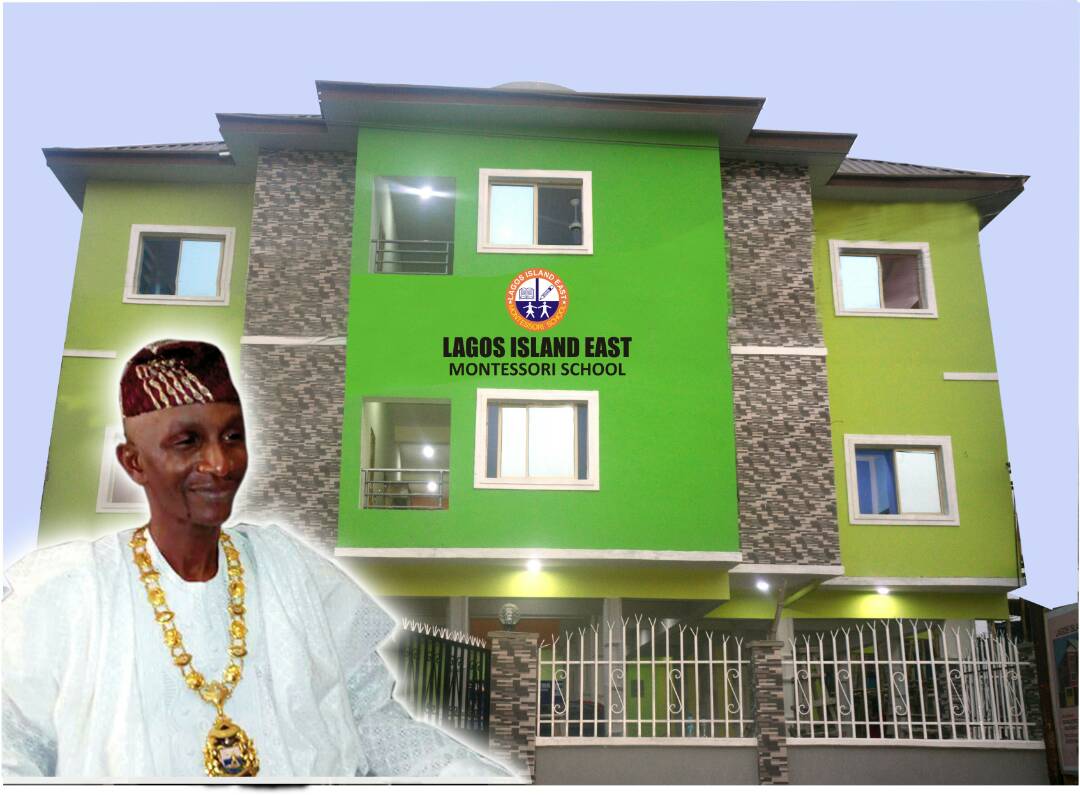 Commissions First Ever Montessori School For The Masses In Lagos

It has been praise galore for Local Council Development Area Chairman of Lagos Island East Local Government, Comrade Kamal Olawale Salau-Bashua, as he marks 100 days in the saddle of Lagos Island, having taken over from the erstwhile chairman on July 2017.

The able chairman seizes the opportunity of his 100days celebration to commission one of his landmark project in the community, the first ever public Montessori school in Lagos Island; Lagos Island East Montessori School for Crèche, Kindergarten and Nursery pupils.

It is a colourful 2-storey building laced in lemon and green with modern facility and educational tools of international standard and it is located at the central point of the community for every parent’s accessibility.

The event was kick-started with a presentation of cake by the entire staff of the LCDA championed by the Head of Admin. Hon Olanrewaju Olalere.

The traditional group also performed with the acrobatic display of popular masquerade in the town.

Lagos state government was also duly represented all the executive, legislative and the judicial arm of the state were recognized.

One of those who showered encomiums on com. Bashua is the former Lagos State Deputy Governor, Mr. Femi Pedro, who commended the developmental strides of the new administration, especially in the areas of education and youth development.

Making the commendation on Wednesday, November 1, 2017, in Oshodi, Femi described as a visionary, Bashua’s strategy to boost modern education as a way of creating jobs and reorienting the young breed in the community.

Otun Are Demola Seriki called on all education advocates to return to the profession as there exists in it lots of opportunities for better and peaceful living.

Lending his voice, Lagos State Deputy Speaker, Wasiu Eshinlokun said that Bashua has achieved a remarkable height in his 100 days in the area of security, education and community development.

Hon Ayo Joseph of the national house of assembly pointed out that before the action of the chairman on education and security, he had done graciously well in his 100 days in office by touching every sector with special regard to security.

Yeye Oluremi Tinubu, a serving senator at the National Assembly, described the 100 days in office of Bashua as eventful, adding that he did not act as a new person in the system but has proved his worth.

She also pontificated on the benefits of basic primary education as a bearing on grooming coordinated, sound and future leaders.

Barrister Akeem Giwa noted that the community members have been enjoying basic grassroots amenities through the goodwill of the able chairman as the people evidently turned out en masse to show support for comrade Bashua, attesting to his kind gesture which shows that he has human feelings.

Wife of the LCDA Chairman, Mrs Bashua also added that the Chairman had shown that he has a good programme for the community and urged him not to relent or get distracted.