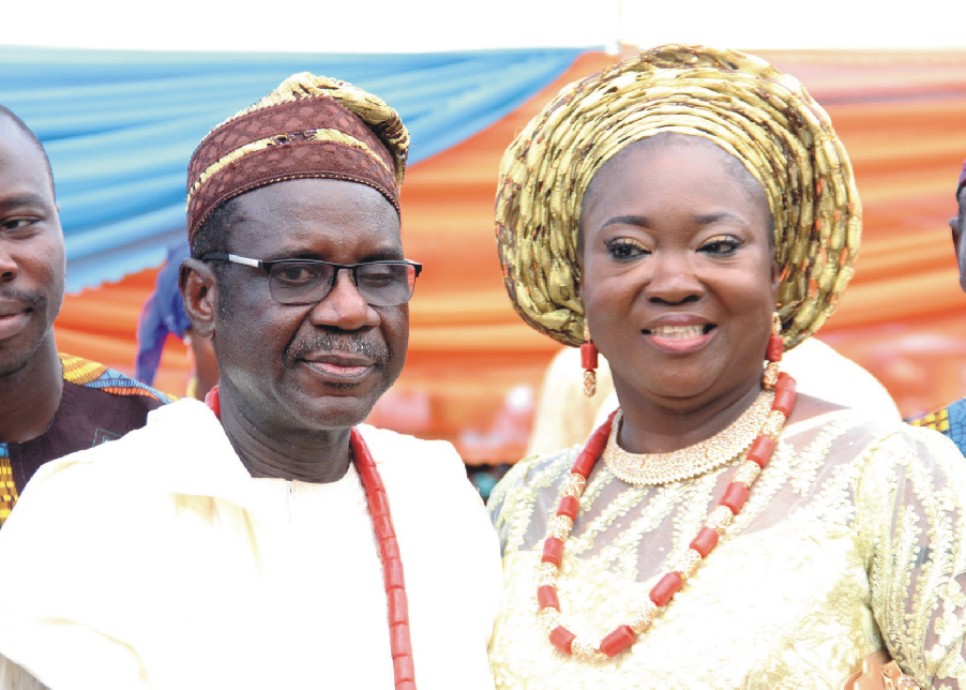 •Details Of The Classy Burial In KWARA State

Saturday 14th October 2017, will remain unforgettable in the minds of many indigenes of Ijagbo in Kwara State. That was the day popular Lagos Lawyer Layi Babatunde, Senior Advocate of Nigeria (SAN) and Editor-In-Chief, Supreme Court Reports buried his Octogenarian mum, Madam Florence Ebunlomo Bobatunde who slept in the Lord on 7th of August, 2017. She died at the age of 85. Captains of industries, Legal luminaries, Hon. Judges and Justices (Serving and retired) Royal fathers, friends, Relations and well wishers all besieged the venue to celebrate the exit of an icon. City People’s Reporter FEMI FABUNMI, attended and now serves you gists from the glamorous occasion. 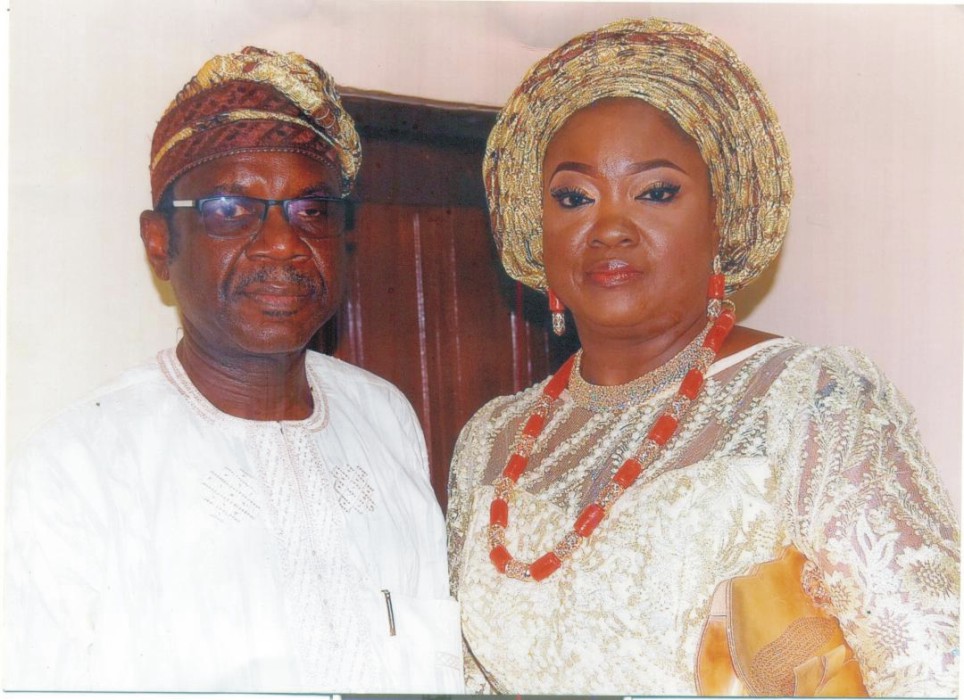 FUNERAL & THANKSGIVING SERVICE
The Funeral and Thanksgiving Service was held on Saturday 14 October, 2017 inside the First Baptist Church, Ijagbo at 10.00am. The officiating minister was Revd Dr S.O Oyedele (the Church Pastor) prayed for the soul of the deceased and everyone present at the occasion. He urged the congregation to live a life worthy of emulation , he told them that mama lived a righteous and holy lifestyle as she was dedicated to God’s work in and out of the church.Revd Oyedele also prayed for Kwara State and Nigeria.
He led other officiating ministers like Rev. Amos Kunat (from New Estate Baptist Church, Surulere, Lagos) Rev. M.A. Adeyemi from Good News Baptist Church, Igbo-Idun, Rev. T.O. Aasa (Glory Baptist Church, Ijagbo) Others are Pastor Tunde Amao, Dn. Tunde Olagunju, Dn Dr. S.O Famuyide, Dns F.M. Amodu and Mr S. A. Adedokun.

UNDERTAKERS DISPLAY WAS FANTASTIC
Clad in brown Aso-oke with Abeti Aja caps to match members of the Harmony funeral service was in charge of Mama Ebunlomo’s casket, these men numbering about 6 danced with the coffin to the admiration of the guests present, they kept dancing until it was time for her to be lowered.

RECEPTION @ AUD PRIMARY SCHOOL IJAGBO
Soon after the interment ceremony was over, all roads led to the AUD Primary School play ground Ijagbo offa, Kwara State. Guests converged on the school field to celebrate the exit of an icon. The tents and chairs were well decorated with shade of green and yellow, whilst the sounds and lighting were perfectly done. 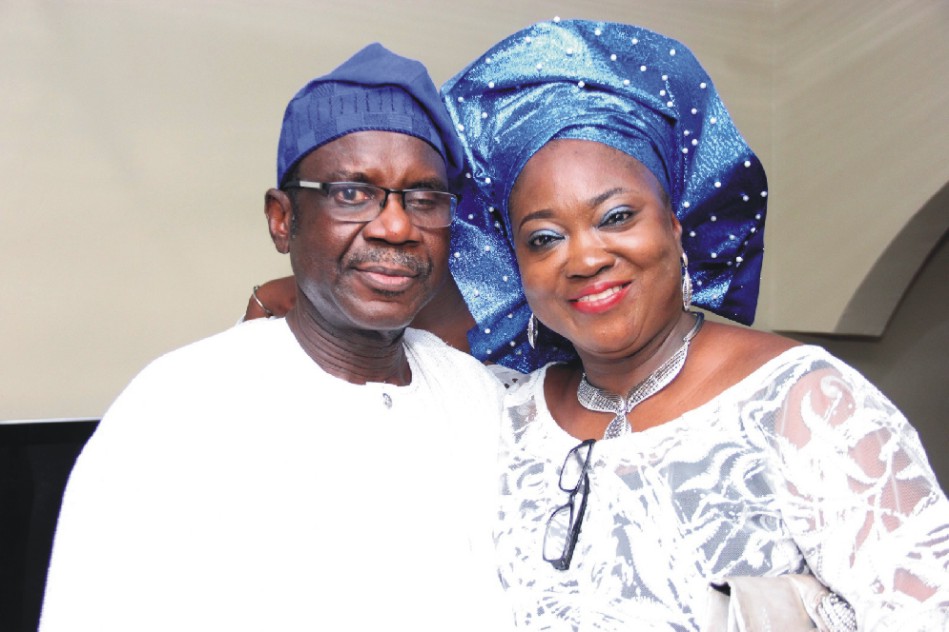 TWO SETS OF ASO -EBI
Some guests were clad in Green and Orange Ankara Fabric and it really looked good on them, some also wore a lovely blue and yellow material. The two materials made the event look so colourful as just only few donned different materials outside the Aso-Ebi.

MAMMOTH CROWD FOR MAMA
If one didn’t look very well, mama’s funeral ceremony could be mistaken for a church crusade. Guests flew in from far and wide, within and outside the country to celebrate the exit of a virtuous woman who knew her onions. They said mama was very good to everyone and they can’t afford to miss giving her their last respect.

OLAWALE POPOOLA ANCHORED
Although a large pool of masters of ceremony besieged the venue and kept exchanging microphone on the stage, the main anchor of the evening was Kwara FM On Air Personality Olawale Popoola and he did a yeoman’s job. His delivery and choice of jokes were very fantastic. Guests kept laughing to his rib cracking jokes.

MUSIC BY APEX BAND
Lagos based musical band Apex entertainment who all clad in white dished out modern and classical tungba tunes and vibes. Guests were seen shaking and dancing to quality sounds that came from the band.

BARRISTER LAYI BABATUNDE (SAN) WAS LOOKING DASHING IN HIS OUTFIT
Apart from being a very sound lawyer, Barrister Layi Babatunde (SAN) looked very handsome in his lovely agbada. He was the cynosure of all eyes at the event he kept moving from one table to another ensuring his guests were properly taken care off.

AVALANCHE OF LEGAL PRACTITIONERS
Mama’s first son Barrister Layi Babatunde is a legal luminary and by virtue of that, many of his lawyer friends besieged the Ijagbo family house and subsequently the reception venue for the funeral ceremony. Trust Lawyers, some of them came to the party with Nigeria’s constitution neatly stuck in their bags.

FAMILY OF LAWYERS
Barrister Layi Babatunde is a senior Advocate of Nigeria , his wife Adejoke Babatunde also a lawyer ,their first Daughter Tomike has been called to be bar whilst Tolani the second daughter recently finished her exams at the Law school. If Mama were to be alive now she would have witnessed 3rd generation of lawyers from the Babatundes

ROYAL PRESENCE TOO
Oba Onipe of Ipee kingdom in Kwara State also graced the occasion in company of his Oloori, their presence added a touch of Royalty to the occasion.

WHAT BARRISTER LAYI SAID ABOUT HIS LATE MUM
‘’ Mama was very dependable and very intelligent, she didn’t tolerate people who weren’t straight forward.She was always advising me, of course it is a big loss to me but for her it is resting time’’.

FOOD AND DRINKS WERE ON POINT
Kwara based catering company, Banquet Catering Services served all kinds of local and intercontinental delicacies, and every guest got whatever kind of food they requested for. Nigera Bottling Company ( NBC) was on ground to serve chilled drinks to guests.

ABOUT THE BURIAL
The burial ceremony was well attended. The crowd was massive. The governor of the state of Osun, Ogbeni Aregbesola could not make it but sent a powerful delegation led by the Commissioner for Women & Children Affairs. Many Judges both serving and retired came.

Justice Salami, the former President of the Court of Appeal came. Mrs. Uwais, the pretty wife of Justice Uwais, the Kwara State Commissioner of Police and many SANs came. At the last count about 20 SANS stormed the burial to support one of their own, Layi Babatunde. His colleagues from the Inner Bar also came. So valued is Layi Babatunde, that the National Bar Association (NBA) wrote him a one page letter signed by Aare Isiaka Abiola Olagunju, the General Secretary of the NBA. Wrote the NBA, “Mama lived a fulfilled life having witnessed the outstanding successes recorded by you and other children and even her grand children during her lifetime”.

The entire exco from Ikeja branch of NBA and past exco members came. The current Chairman Adesina Ogunlana came. So also the deconates and members of New Estate Baptist Church came. The Commissioner for Works in Kwara State, Aro Yahaya came. A lot of dignitaries came from home and abroad. The crowd was overwhelming. Respected Ibadan businessman, Chief Adebayo Adetunji came in from Ibadan. Dashing lawyer, Chief Bolaji Ayorinde (SAN) also came. The programme for the Funeral & Thanksgiving was rich in Tributes. And the interesting thing was that all the tributes were saying the same thing in different words, about Mama’s lovely character. Her life was like an open book.

So huge was the turn out that for the Wake up the church auditorium was filled up. Even at the Thanksgiving the venue overflowed with eminent Nigerians. Many wondered how a private person who is not in public office could pull that kind of huge crowd. Layi Babatunde was elated and filled with joy. He was overwhelmed about the turn out. Family and friends rallied round him and they blew his mind beyond his imagination. Also spotted at the event was literary giant, Mr. Kunle Ajibade, one of the directors of The News magazine. 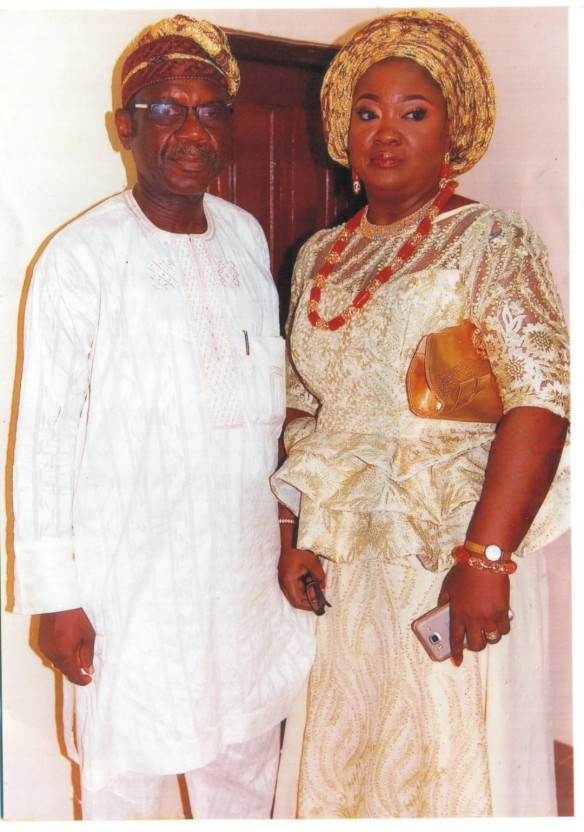 ABOUT THE DECEASED
Madam Florence Ebunolomo Babatunde (nee Adisa) (1932-2017) came from an illustrious background. Her father’s name was Isaac Adedayo Adisa, and her Mother, Comfort Wuraola Adisa (both of blessed memory). She hailed from Ile Ijagbo, but was born in Beckley Street, Ebute Metta, Lagos. Her parents were reputed to be the first to change from thatched roof to corrugated Iron sheet in Ijagbo, and were pioneers of First Baptist Church Ijagbo, where she was Baptised on Twelveth day of February, 1955, by Pastor J. L. Boye (of blessed memory). She had her Standard School Education; at Idi-Ikan Baptist Day School, Ibadan, in the then Western Region.

She got married into the Aloko Compound, Ijagbo by her marriage to John Afolabi Babatunde, Akanji Aso; of blessed memory; and was blessed with many children and grand children; all of whom are favoured of God in their various endeavours.

Madam Florence Ebunlomo Babatunde a.k.a “Praise the Lord”! Lived a productive life, in the service of man and her creator. She was industrious, versatile and a Mother in every true sense. Her working life spanned several endeavours.
She was a prominent Seamstress and reputed to be the first seamstress in Ijagbo. Mama trained many apprentices having commenced her sowing business in 1955.

Mama was very fashionable and encouraged her children to dress decently.
Mama moved away from tailoring into Education; and she left the Ministry of Education as a Senior Matron having served at Offa Teachers’ College and Igosun Teacher’s College respectively, from where she retired in 1985.
After the demise of her husband in 1986; she relocated temporarily to Ilorin, Kwara State where she went into trading in soft drinks, until her children requested her to rest the business.

Mama loved her children passionately, but will not spare the rod, as occasion demands. She was a master in the practice of Tough Love! Children include all entrusted to her care. She treated all children that came her way, the way she would her own children.

Mama always admonished her children to “know the children of whom they are” and trust in the Lord always. She valued hard work and abhorred fraudulent business practices.
She had a reputation of forthrightness and spoke her mind without deceit. She could be blunt to a fault and did not suffer fools gladly. To her, a spade cannot be called by any other name. Some have said in being forthright, she was like her own Mother too, Comfort Wuraola of blessed memory. Mama was prayerful and dependable, trusting in God and the salvation offered by Jesus to the end.

She loved to sing and little wonder she was fondly called ‘Mama Praise the Lord’ ! Mama served in the Adult choir of First Baptist Church Surulere Ilorin; the Bethel Baptist Association; was Chairperson of Agbebi Baptist Association and was W.M.U. Secretary and President respectively at diverse times. Mama was a delegate to several Baptist conventions and was a member of the Executive Committee of the Church among other Committees of First Baptist Church Ijagbo. She was the president of Egbe Ore-Ofe, 1st Baptist Church, Ijagbo since inception several decades ago, until her transition to glory on 7th August, 2017. It is instructive, that even when Mama temporarily relocated to IIorin; upon the demise of her beloved husband, she was allowed to retain the office and all meetings were still held in her residence until she returned home and eventually departed to meet her Lord and Saviour, Jesus Christ. May her gentle soul rest in peace.

ALLOW ME CALL JONATHAN AS A WITNESS, METUH TELLS COURT