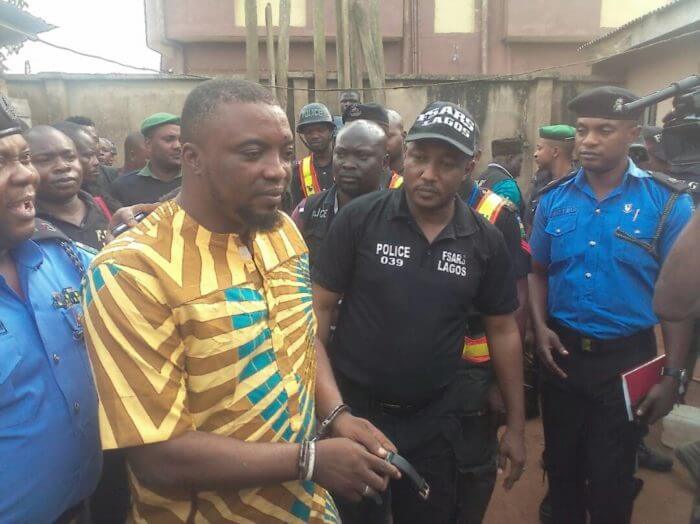 The Lagos State Police Command on Tuesday made a major breakthrough in the fight against the menace of Badoo cult with the arrest of the group’s herbalist, Fatai Adebayo alias Alese.

The notorious activities of the dreaded cult group prevalent in Ikorodu and Epe axis of the State had sent many of the victims to their early graves with cruel killings through the smashing of mortar and pestle on victims’ heads.

Adebayo, 34, who specializes in administering oath on members of the group before they launch any attack, was arrested at his shrine located in Imosan Village, a suburb of Ijebu-Ode, Ogun State.

The arrest of the herbalist followed the arrest of some Badoo cult suspects at the weekend including the overall head of the group.

Speaking while parading Adebayo before newsmen at the shrine, the State’s Commissioner of Police, Mr Imohimi Edgal said the head of the group was arrested on water during an attempt to escape.

The CP, who led the operation involving the Commander of Rapid Response Squad (RRS), ACP Tunji Disu; Chairman of Lagos State Special Task Force, SP Yinka Egbeyemi, among others, said investigation was still ongoing but that the full details about the arrests made so far would be disclosed on Thursday at a press briefing.

He said: “Over the weekend, we had far reaching achievement in the fight against the killers popularly known as Badoo in Ikorodu.

“Their kingpin who is the head of the group has been arrested. He was arrested on water as he was making his escape.”

Revealing how the herbalist was arrested, Edgal said: “One of the suspects arrested confessed and he led us here that before they go for any killing, the head of the group brings them to this gentleman (Adebayo) to come and carry out oath for both themselves and the piece of stone they used for their killings and that they don’t go for any killing without first of all coming for oath in this shrine and that is why we are here.

“This gentleman is an accomplice before the fact and so definitely we are placing him under arrest and as well as sealing off the shrine till after investigation.

“I will give further details on Thursday during my press briefing but I can assure the good people of Ikorodu, Lagosians and Nigerians that we will not rest until this evil is completely rooted out from Lagos State,” Edgal assured.

The CP also made a brief stop-over at the palace of the traditional ruler of Imosan Village, Chief Tajudeen Muili to intimate him of the criminal activities going on under his domain.

At the shrine located at No 38, Ayegbami Quarters in Imosan, which was later demolished by policemen, there were different charms and big stones said to be used for the illicit activities of the Badoo group