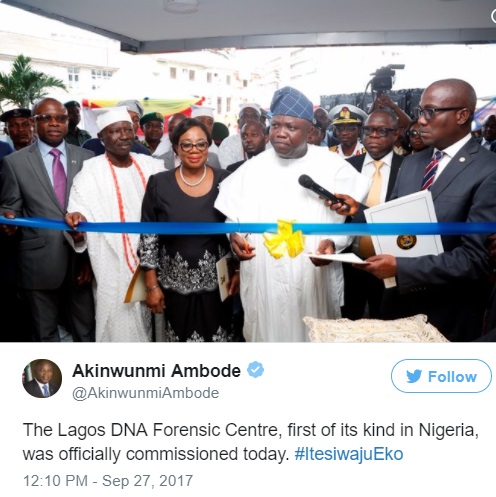 The Governor of Lagos State, Mr. Akinwunmi Ambode, on Wednesday inaugurated the state’s DNA Forensic Centre, first of its kind in the West African sub-region, Punch reports.
Unveiling the DNA laboratory, located on Odunlami Street, Lagos Island, the governor said it would not only help in the resolution of crimes but would also be useful in clearing controversies relating to paternity.
Ambode described the laboratory as a significant milestone in his administration’s quest to strengthen the justice system in Lagos and to make the state safe both for the residents and investors.
According to him, the initiative had brought Lagos State at par with other advanced societies around the globe where technology was being exploited to make life easier for the people.
Ambode said, “From the domestic front to our places of work, from the way we learn, to doing business, the use of technology has become a way of life. You will, therefore, understand why our administration had no hesitation in approving this project which serves, amongst other things, as an effective method of bringing perpetrators of crime to book and ensuring quick dispensation of justice.”
The governor noted that the DNA Forensic Centre had been adequately equipped to provide services such as“serological screening of blood and semen; DNA analysis of bone, teeth and hair; maternal and paternal relationship DNA analysis; expert witness and case handling services; paternal and maternal ancestry DNA analysis; cold case file review and mass disaster human identification.”

This is a demonstration of our resolve to stay ahead of criminals through scientific led investigations. pic.twitter.com/v8LVrVG6BO

These services, he said, would come in handy to the police, prosecutors, defense counsel and private citizens.
The governor gave the assurance that his administration would not rest on its oars but would immediately move to the second stage of the project, by creating additional capacity in the areas of “toxicology; trace evidence and controlled substance analysis; fingerprint and latent prints; firearms, ballistics and tool marks; digital forensics; and questioned documents examination.”
The Consul General of the United States Embassy in Lagos, Mr. John Bray, congratulated Ambode and the people of Lagos State for the successful completion of “the first DNA Forensic Centre not only in Nigeria but in West Africa,” saying that the development would enhance justice and progress.
In his welcome address, the Lagos State Attorney General and Commissioner for Justice, Mr. Adeniji Kazeem, said the centre would assist the state to have a reliable DNA database that would enable investigators and law enforcement agencies to identify crime patterns and suspects, and also help to exonerate or convict suspects.
On his own part, the Chief of Defence Staff, Maj. Gen. Abayomi Olonishakin, who was represented by Rear Admiral Lawal Modu Adams, said the centre was a significant milestone in the country’s fight against all forms of crime including terrorism.
Also, the Lagos State acting Commissioner of Police, Mr. Imohimi Edgal, described the completion of the centre as a further demonstration of Lagos State’s penchant for blazing the trail in terms of justice and security reforms.
Lagos State Govt Unveils First DNA Forensic Lab in West Africa was last modified: September 27th, 2017 by Arinze Ago