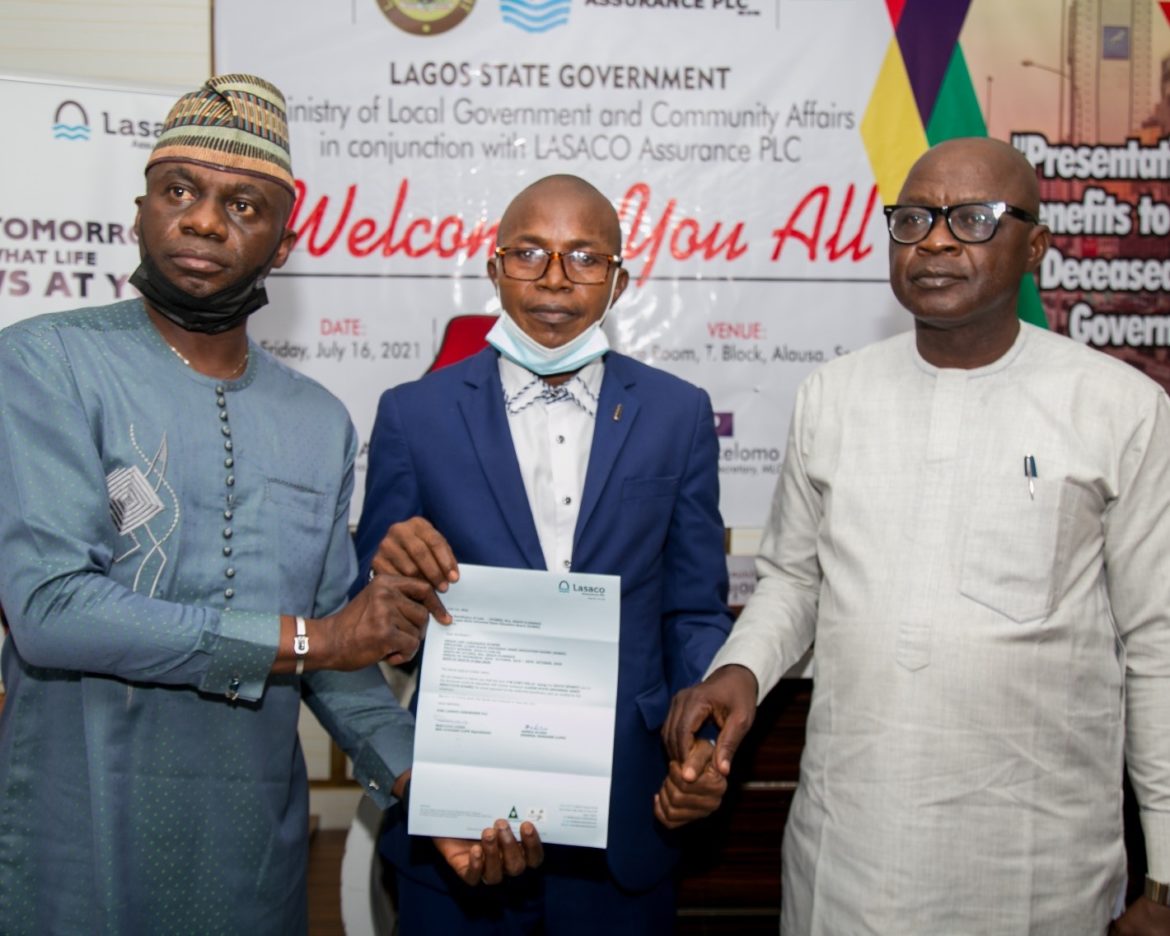 In line with its total commitment to continually uplift the welfare of its staff, the Lagos State Government has again paid the total sum of Three Hundred and Sixty-Four Million, Nine Hundred and Eighty-Two thousand, Two Hundred Ten Naira, Thirty-Nine Kobo (N364,982,210.39) only through the presentation of insurance benefits to the first batch of beneficiaries of deceased staff of Local Government and State Universal Basic Education Board (SUBEB).

Commissioner for Local Government and Community Affairs, Dr Wale Ahmed made this disclosure at the presentation of insurance benefits to 159 members of the family of late employees of Lagos State Universal Basic Education Board, LASUBEB and Local Government Service Commission held in Alausa, Ikeja, on Friday, July 2021.

While speaking at the event, the Commissioner, represented by the Permanent Secretary, Mrs Morenike Kikelomo Sanyaolu stated that the payment of insurance benefits to families of deceased staff was one of several welfare packages of the State Government for its workforce.

He stated that the State Government recognises its workforce as the engine room and drivers of all its policies, stressing that the contribution of every employee of the state government was germane to achieving the greater Lagos initiative.

Managing Director, LASACO Assurance PLC, Mr Rasaq Abiodun commended the good gesture of the Lagos State Governor, Mr Babajide Olusola Sanwo-Olu for the consistent payment of insurance benefits to its employees, adding that the gesture has helped in actualising the aspirations of the families and dependents of some government officials who died in the course of their career in the State Public Service.

He added that LASACO had been paying the insurance premium benefits to the families of deceased Local Government Councils and State Universal Basic Educational Board Staff since 2009 as a result of prompt payment of premium by the state government to LASACO.

In his remarks, the Chairman of SUBEB, Hon. Wahab Alawiye King represented by Mrs Adenike Odusanya said that the presentation was meant to honour the departed souls who had worked tirelessly to make Lagos State a better place for the living.

The Managing Director of Haggai Insurance, Mr Segun Amure commended the State Government for its prompt payment of premium claims to families of primary school teachers, adding that the payment by the state government consistently had ensured that the dependants left behind would not suffer.

According to him, “As far as I know with payment of premium to beneficiaries of the deceased, it is only the Lagos State Government in the federation that has been consistent with this scheme”, he said.

Earlier in his welcome address, the Director for Local Government Administration, Mr Razak Amodu counselled the beneficiaries to be truthful, and pay particular attention to the needs and education of deceased children, stressing that, their deaths must not be in vain.

Responding on behalf of the beneficiaries, Dr Akpezi Benjamin Etobro praised the State Government for the payment of the insurance benefits to them as beneficiaries. He said that they have all heard the purpose and the responsibility of the rewards to them, and promised that they would all use the payment for the dependants’ welfare and progress in life.