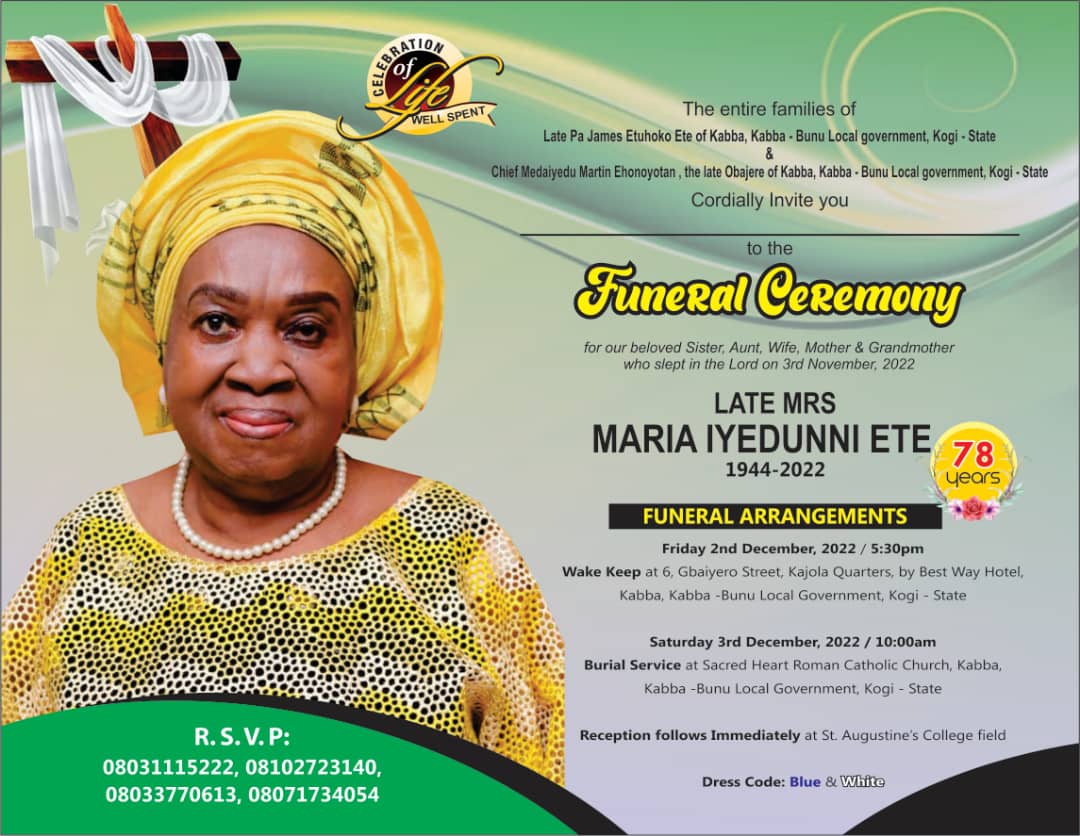 The body of late Mrs. Maria Iyedunni Ete is finally set for eternal rest as the family of the deceased has announced the funeral arrangement for their beloved matriarch. They have meticulously planned the ceremony to hold as follows:

Late Mrs. Ete died on 3rd November 2022 at the gracious age of 78. She was survived by children, grandchildren, sisters, brothers and other close relatives.

The entire family of Late Pa Etuhoko Ete and Chief Medaiyedu Martin Ehonoyotan both from Kabba in Kogi state are ready to give the deceased a befitting burial ceremony. It is a celebration of a life well spent by the deceased.

Mrs. Maria Dada Iyedunni Ete (Nee Medaiyedu) lived a fulfilled life in service to God and humanity. She was born on 8th October 1944 to Chief Martin Ehonoyotan Medaiyedu the Obajere of Kabba and Madam Ruth Jopo Medaiyedu (Nee Lakutu) at, Iduge in Ego in the present Okedayo – Kabba. She was brought up by her great grandmum in person of Madam Olonike where she stayed for a number of years before she left in annoyance because she was not enrolled in school despite her love and interest in western education. She later enrolled in an adult literacy programme in her later years to acquire western education to better her lot.

She moved again to Ikare, a commercial centre close to Kabba where she learnt the art of Cocoa trading courtesy of her uncle. Mr. Kolawole where she worked for two years. She returned to Kabba in 1962 to work as an apprentice in sewing under the tutelage of Mrs Omonori which lasted for a period of one and half years.

By 1964, she got married to her heartthrob late Mr. James Etuhoko Ete, she worked as a sewing mistress and her shops were located at, Pa. Fashami’s house and Pa. Patrick Gunwa’s house close to the Sacred Heart Roman Catholic Church, Kabba and Kabba Central Market.

She relocated to her house at 6, Gbaiyero Street, Kajola Quarters Kabba in 1977 to continue her sewing trade sequel to the challenges of the family task. By 1983, she diversified by venturing into the trade of food vendors in schools, which she did at, St. Augustine’s College, Kabba, Kajola Nursery and Primary School and Federal Government Girls College (FGGC), Kabba. She was later employed as a caterer at FGGC Kabba from where she retired in 2007.

In her active lifetime, she loved to praise and worship God in an extraordinary dimension coupled with being a prayer warrior, her love for those around her was second to none as testified by a number of people who paid her tributes at her demise.

She was indeed a loving and caring mother, blessed with wonderful children and grandchildren.

UNDESERVED ASSAULT ON THE BUREAUCRACY BY ERIC TENIOLA

What Women Should Know About MENOPAUSE -LAGOS...

How Absence Of Technical Colleges Has Affected...