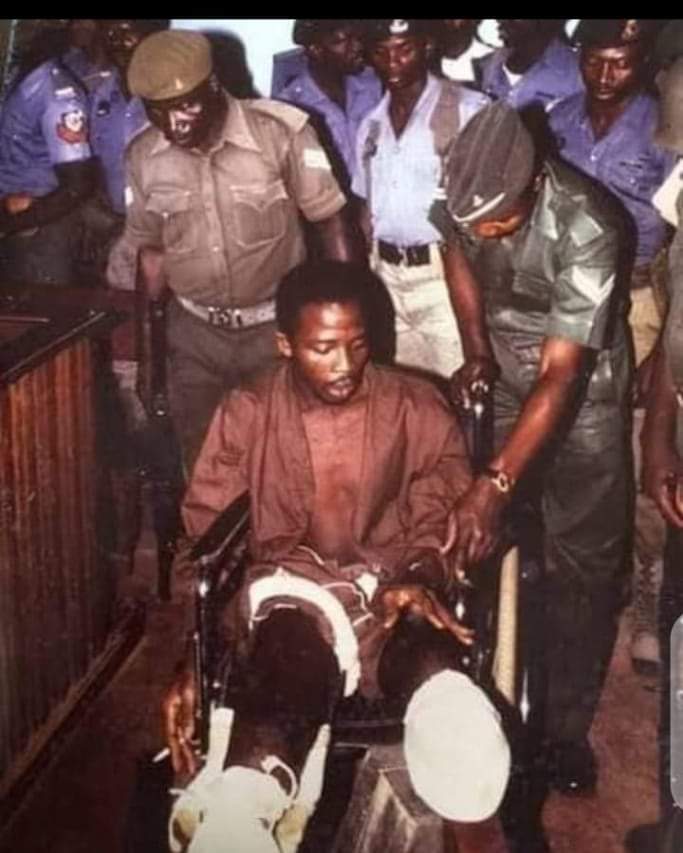 Exactly 34 years ago today, the notorious bandit who terrorised Benin City and old Bendel State the 80s , Lawrence Nomanyagbon Anini  A.K.A. “Ovbigbo” or “the Law” and some members of his gang were  executed by firing squad after being convicted by the defunct Bendel Armed Robbery and Firearms Tribunal presided over by Justice James Omo-Agege

Anini was born in a village about 20 miles from Benin City in present-day Edo State. He migrated to Benin at an early age, learned to drive and became a skilled taxi driver. Anini became known in Benin motor parks as a man who could control the varied competing interests among motor park touts and operators.

He later delved into the criminal business in the city and soon became a driver and transporter for gangs, criminal godfathers and thieves. Later on, he decided to create his own gang which included, Monday Osunbor, Friday Ofege, Smallie ,Henry Ekponwan, Eweka and Alhaji Zed Zed or Zegezege who was never captured. They started out as car hijackers, bus robbers and bank thieves. Gradually, he extended his criminal acts to other towns and cities far north and east of Benin.

The complicity of the police is believed to have triggered Anini’s reign of terror in 1986. In early 1986, two members of his gang were tried and prosecuted against an earlier under-the-table ‘agreement’ with the police to destroy evidence against the gang members. The incident, and Anini’s view of police betrayal, is believed to have spurred retaliatory actions by Anini. In August, 1986, a fatal bank robbery linked to Anini was reported in which a police officer (Nathaniel Egharevba) and others were killed. That same month, two officers on duty were shot at a barricade while trying to stop Anini’s car. During a span of three months, he was known to have killed nine police officers.

In an operation in August 1986, the Anini team struck at First Bank, Sabongida-Ora, where they carted away N2,000. But although the amount stolen was seen as chicken feed, many persons were killed. On September 6, same year, the Anini gang snatched a Peugeot 504 car from Albert Otoe, the driver of the famous super cop  Assistant Inspector General of Police, Christopher Omeben. In snatching the car, they killed the driver and went to hide his corpse somewhere. It was not until three months later that the skeleton of the driver was spotted 16 kilometers away from Benin City, along the Benin-Agbor highway. A day after this attack, Anini, operating in a Passat car believed to have been stolen, also effected the snatching of another Peugeot 504 car near the former FEDECO office, in Benin.

Two days later, the Anini men killed two policemen in Orhiowon Local Government of the state. Still in that month, three different robbery attacks, all pointing to Anini’s involvement, took place. They include the murder of Frank Unoarumi, a former employee of the Nigerian Observer newspapers; the killing of Mrs. Remi Sobanjo, a chartered accountant, and the stealing of the Mercedes Benz car in Benin, of the Ughelli monarch, the Ovie. Before September 1986 drew to a close, Anini struck at a gas station along Wire Road, Benin, where he stole a substantial part of the day’s sales. He shot the station’s attendant and gleefully started spraying his booty along the road for people to pick. The height of Anini’s exploits, however, took place on October 1, 1986, the Independence Day when the state’s Commissioner of Police, Casmir Akagbosu was ambushed by the gang in Benin riddled his convoy in a hail of bullets. The police boss survived the attacks with serious injuries. Earlier that day also, the Anini men had gunned down a police man within the city

“The Law”, as he was nicknamed, during an operation that went bad reportedly  had to escape from the police by driving in reverse for a greater part of the distance from  Agbor (Delta State) to Benin City (Edo State).

Also, on October 21 of same year, the Anini robbery gang terminated the life of a Benin-based medical doctor, A.O Emojeve when they gunned him down along Textile Mill Road, in Benin. Not done, Anini and gang went and robbed the Agbor branch of African Continental Bank and carted away about N46, 000. A day after the operation, Anini, The Law, turned to a ‘Father Christmas’ as he strew wads of naira notes on the ground for free pick by market men and women at a village near Benin. Anini’s image thus loomed larger than life, dwarfing those of Ishola Oyenusi, the king of robbers in the 1970s and Youpelle Dakuro, the army deserter who masterminded the most vicious daylight robbery,at Boulous Enterprises  in Lagos in 1978, in which two policemen were killed. Anini thus spearheaded a four-month reign of terror between August and December 1986. Anini also reportedly wrote numerous letters to media houses using political tones of Robin Hood-like words, to describe his criminal acts.

Worried by the seeming elusiveness of Anini and his gang members, the military President, General Ibrahim Babangida then ordered a massive manhunt for the kingpin and his fellow robbers. The police thus went after them, combing every part of Bendel State where they were reportedly operating and living. The whole nation was gripped with fear of the robbers and their daredevil exploits.

However, Police manhunt failed to stop their activities; the more they were hunted, the more intensified their activities became. Some of the locals in the area even began to tell stories of their invincibility and for a while, it felt like they were never going to be caught. However, at the conclusion of a meeting of the Armed Forces Ruling Council , the Nation’s then  highest ruling body in October 1986, General Babangida turned to the Inspector- General of Police, Etim Inyang, and asked, ‘My friend, where is Anini?’ Apperently embarrassed, IGP Iyang could only tell his  Commander  in Chief that “We are still looking for him sir”. IGP Iyang was  soon to tender his notice of retirement from the force.

At about this time, Nigerian newspapers and journals were also publishing various reports and editorials on the ‘Anini Challenge’, the ‘Anini Saga’, the ‘Anini Factor’, ‘Lawrence Anini – the Man, the Myth’, ‘Anini, and ‘Lawrence Anini: A Robin Hood in Bendel’. The Guardian New papers  asked, emphatically, in one of its reports: ‘Will they ever find Anini, “The Law”?’.

An African Proverb says “everyday for the thief ,one day for the owner,  Anini’s reign of terror was eventually brought to an end with his arreste by a police officer , Superintendent of Police, Kayode Uanreroro on December 3,

with very little resistance. Uanreroro led a crack 10-man team to the house, knocked on the door of the room, and Anini himself, clad in underpants, opened the door. “Where is Anini,” the police officer quickly enquired. It was believed that his girl friend had a hand in his arrest. Many are of the opinion that the girlfriend collaborated with the police and took Anini’s charms away before the police arrived. Dazed as he was caught off guard and having no escape route, Anini all the same tried to be smart. “Oh, Anini is under the bed in the inner room”. As he said it, he made some moves to walk past Uanreroro and his team. In the process, he shoved and head-butted the police officer but it was an exercise in futility. Uanreroro promptly reached for his gun, stepped hard on Anini’s right toes and shot at his left ankle. Anini surged forward but the policemen took hold of him and put him in a sitting position. They then pumped more bullets into his shot leg and almost severed the ankle from his entire leg. Already, anguished by the excruciating pains, the policemen asked him, “Are you Anini?” And he replied, “My brother, I won’t deceive you; I won’t tell you lie, I’m Anini.”

He was from there taken to the police command headquarters where the state’s Police Commissioner, Parry Osayande, was waiting. While in the police net, Anini who had poor command of English and could only communicate in pidgin, made a whole lot of revelations. He disclosed, for instance that Osunbor, who had been arrested earlier, was his deputy, saying that Osunbor actually shot and wounded the former police boss of the state, Akagbosu

Anini was shot in the leg, transferred to a military hospital, and had one of his legs amputated. That was after Monday Osunbor was also captured. When Anini’s hideout was searched, police recovered assorted charms, including the one he usually wore around his waist during “operations”. It was instructive that after Anini was captured and dispossessed of his charms, the man who terrorised a whole state and who was supposed to be fearless suddenly became so lilly livered and started singing like a sparrow,   making confessions. This was against public expectation of a daredevil hoodlum who would remain defiant to the very end.

Shortly after the arrest of Anini and co, the dare-devil robbers began to squeal, revealing the roles played by key police officers and men, in the aiding and abetting of criminals in Bendel State and the entire

country. Due to the amputation of his leg, Anini was confined to a wheelchair throughout his trial.

Anini particularly revealed that Chief Supretendent of Police Iyamu, who was the most senior police officer shielding the robbers, would reveal police secrets to them and then, give them logistic supports such as arms, to carry out robbery operations.

He further revealed that Iyamu, after each operation, would join them in sharing the loot. It was further exposed how Iyamu planned to kill Christopher Omeben, an Assistant Inspector-General of Police in charge of Intelligence and Investigation. But Iyamu was later to be disappointed as the assailants dispatched to eliminate Omeben were only able to kill his driver, Otue, a sergeant. Iyamu, whom the robbers fondly referred to as ‘Baba’, reportedly had choice buildings in Benin City; being how he invested the loots he obtained from men of the underworld. Iyamu, on his part, denied ever knowing and collaborating with Anini. But Anini stood his ground .Of the 10 police officers Anini implicated, five were convicted. The robbery suspects, including Iyamu, were sentenced to death.

But in passing his judgement, Justice Omo-Agege remarked, “Anini will forever be remembered in the history of crime in this country, but it would be of unblessed memory. Few people if ever, would give the name to their children.” The execution of Anini and the  remaining members of his gang took place on the last Saturday of  March ,1987. Osunbor and CSP Iyamu had been executed few weeks earlier.

SIXTY – ONE YEARS OF AWUJALE ADETONA ON THE THRONE