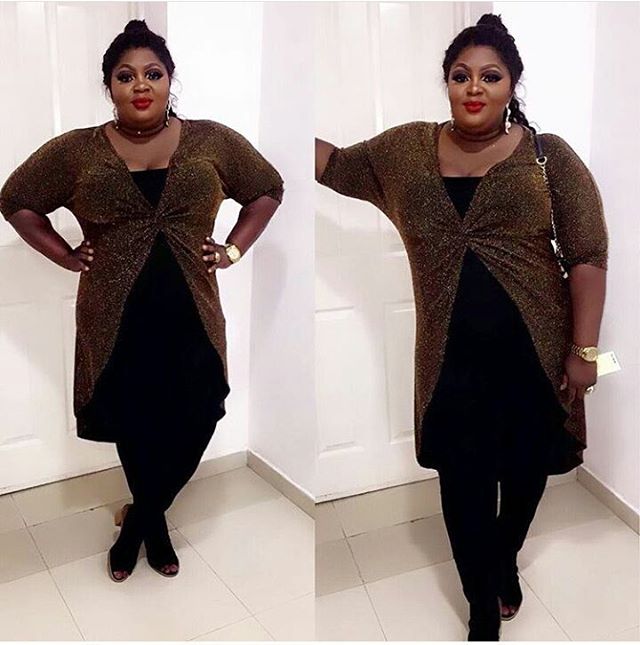 Lately, if you have been watching the new Yoruba movies coming out you would have noticed that star actress, Eniola Badmus has not been featuring in many of these movies.

Lately, she has been doing a lot in the English movies sector. That is why you see her featuring in a lot of English movie. These days, Eniola, who has featured in a lot of Yoruba movies now spends a lot of time in the East, especially in Asaba, shooting movies.

Why did Eniola abandon Yoruba movies for English movies, City People asked her a few months back. At what point did she decide to cross over? Was it deliberate?

At some point in 2010, a producer actually called me from the English sector. I have always been friends with them. Asides from me doing Yoruba films, I still have my friends over there with whom I relate well.

The guy was like okay Eniola, it seems we have a movie role for you. Can you just come over. After that some other guys called me. Simoney called me. With Simoney, I did Black Berry Babes. All of them were just calling me and calling me”.

Its all about the job. I relate with everybody. Its been a wonderful experience. I have made good money from acting in the English sector.

Things I couldn’t do before now I can do. I travel. I live well and I have good investments. So I can concentrate on my career. I am not really there yet. I am not quite where I would like to be”.

Looking through her schedule written on a board, in her cosy living room at her lovely flat at Oniru Estate, most of her appointments are dates of movie locations she is scheduled to go for at Asaba.

Back to back for 3 weeks she’s supposed to be in Asaba. Suddenly, these days Eniola spends a lot of her time in Asaba, the hub of movies in the East. How does she find time to rest with all these busy schedules?

She smiles. “You are right,” she punctuates the question. “I have been busy, busy, busy. I go to location back-to-back. But thats what we all pray for.

But I have a radio show now in Lagos. Its a new one. Its called Just Talk With Eniola Badmus with City FM 105.1. Every Mondays and Thursdays. 6:30pm”.

How does she juggle all these roles? She is an Etisalat Brand Ambassador, Radio Presenter, Actress, MC, etc. “I know what you mean”, she replies. “But man must wak ooo. One of the things I have found out in this industry is you have to be busy. Even if you are not busy, busy, just engage yourself in something. So they can still hear from you. Make sure they still see you. That is what this entertainment industry is all about”.

As an accomplished actor, what advice will she give those coming behind in terms of what will help them succeed in the movie world? “Let me use myself as an example”, she says. “When I was in the secondary school I started doing drama. So, when I went to the University I did Theatre Arts. This prepared me a little bit for my career. I went to UI where I studied Theatre Arts.

When I left UI. I went to LASU to do Economics. These are 2 different courses. I never knew that Economics in the University is all about Mathematics.

I thought it was like the Economics we did in secondary school, that involves essays, when I got to 200 level they started giving us statistics. I almost stopped I didn’t really know what it entails.

“When I was in secondary school. I was funny naturally. Some of my colleagues paid me N5 to get me to go to their class. I went to AGGS, Ijebu-Ode. Once they pay I will go there to crack jokes and perform for them. So at some point I said to myself, Eniola, I think I can make a career out of this. So, I joined the drama group in my secondary school. Later, I went to the University. Those I saw them were Regina Askia on TV, Ayo Adesanya, Bisola Fadayomi, Victoria Iyama. I used to like the way they dressed. They are all wonderful actors and actresses. I knew all their lives in most of the movies they did. There was one movie they did then Most Wanted. Back to the question you asked. Its beyond what they see from outside.

There were times I got frustrated. There were low times I will go back home saying I am not doing again. It was so frustrating. There are times you will go for auditions and they won’t give you money, you don’t get paid. Atimes I will leave my house for about 2 to 3 weeks at times 1 month. I won’t get one naira.

When I get back home my parents will be worried. They will say: Why are you going there? Its not as if you ask for money and we won’t give you. We sent you to school. You have not even finished your school. When I was in my 100 level in U.I That was when I started going for all those auditions. My mum used to be worried she never liked me acting. Even my father was also worried. There was one day I acted one Yoruba film like that 100 years. They did some graphic effects in that movie. I disappeared from one place to another. Hay! If you know what my ears heard, when my parents saw that movie.