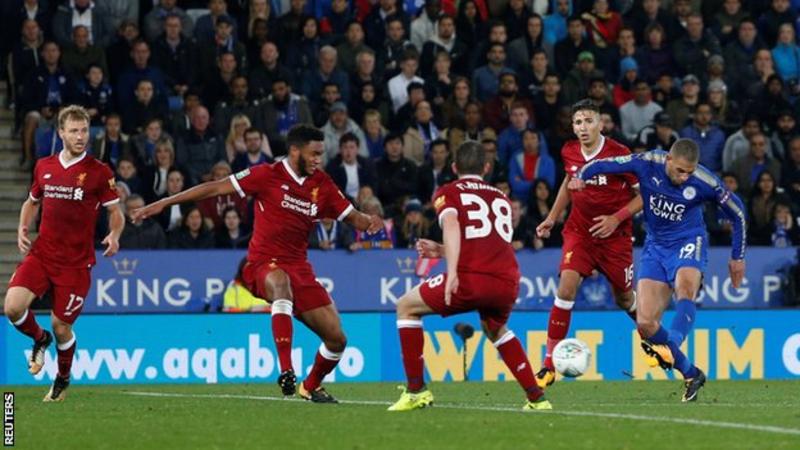 Liverpool FC have not won a single match since after dubbing Arsenal 4-0 in the Premier League and purchasing England winger Alex Oxlade-Chamberlain from the gunners at the tail end of the summer transfer window.
And the woes continued for the Reds when Islam Slimani’s superb strike helped Leicester see off a wasteful Liverpool at the King Power Stadium to reach the fourth round of the Carabao Cup.
The Algeria striker’s left-footed shot found the top corner after substitute Shinji Okazaki had put the Foxes ahead.
That came after Liverpool had dominated a first half in which Philippe Coutinho impressed before being replaced.
Okazaki’s arrival sparked the Foxes into life and he latched onto Vicente Iborra’s knockdown for the opener.
Summer signings Oxlade-Chamberlain and Dominic Solanke both missed good opportunities for the visitors, who named a much-changed side.
Elsewhere, Roy Hodgson got his first win as Crystal Palace boss at home to Huddersfield and Bristol City shocked Premier League Stoke.
It took Tottenham 65 minutes to break down a resolute Barnsley at Wembley, while Leeds beat Burnley on penalties at Turf Moor.
Joshua King scored in extra time to send Bournemouth through against Brighton, as Middlesbrough knocked out fellow Championship side Aston Villa and Swansea won at Reading.