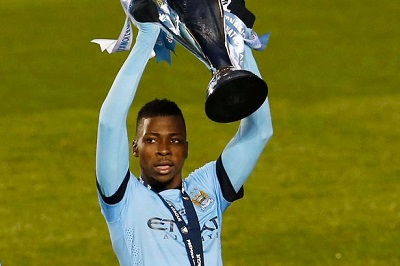 Leicester City manager Craig Shakespeare is leaving no stone unturned in his bid to land Manchester City Nigerian forward Kelechi Iheanacho.
Already a bid of £25m has been lodged for the forward, who has been told he can leave the club but only if a replacement is signed as the club need three strikers for next season.
However, City are keen on inserting a buy back clause in any deal for the 20 year old, who was close to joining West Ham few weeks ago before talks stalled over the fee for the buy-back. Although talks are back on with West Ham, Leicester City are now odds on favourite to sign Iheanacho as aside offering City a decent fee, they have also promised him a new role just behind the striker.
Leicester City already have Jamie Vardy and Islam Slimani as top strikers, Shakespeare will hand Iheanacho his favourite role behind the striker, if he agrees to join the club, a move which could make him force his move away from Manchester City. The Nigerian although boast of a fantastic  goal scoring record, he isn’t entirely at home playing as a lone striker, as he prefers playing just behind the main striker where his late runs into the box often go unsighted. In other news, Liverpool have completed the £36.9m signing of Mohamed Salah from Roma. The 25-year-old has been a long-term target, with Liverpool missing out on his signature three years ago when he joined Chelsea before embarking on an underwhelming spell in the Premier League.
However, after impressing in Serie A with 29 goals in 65 appearances for Roma, the Liverpool manager, Jürgen Klopp, believes the winger has developed a more rounded game and his “incredible” pace will add depth to a squad which will be further tested this season with the challenge of a Champions League campaign.
Speaking to Liverpoolfc.com, Salah said: “I’m very excited to be here. I’m very happy. I will give 100% and give everything for the club. I really want to win something for this club.
“We have a great team and very good players. I was watching the games last year and everyone was giving 100% to win something. Everyone can see the coach gives everything. I hope to see that together we can give everything to win something for the club, for the supporters and for us.”
The fee, which could rise to a staggering £43.9m with add-ons according to Roma, is a record transfer fee for the club, eclipsing the £35m spent on Andy Carroll from Newcastle United back in January 2011. Chelsea are due to receive a percentage of the Egypt international’s latest transfer fee.
Klopp said of his new signing, who will wear the No11 shirt for Liverpool: “Mohamed has the perfect mix of experience and potential – this is a really exciting signing for us. He knows the Premier League, he has pedigree in the Champions League and he is one of the most important players for his country.
“His record in Italy has been outstanding and he possesses qualities that will enhance our team and squad. His pace is incredible, he gives us more attacking threat and we are already strong in this area.
“Most important, though, for us, is that he is hungry, willing and eager to be even better and improve further. He believes in what we are trying to do here at Liverpool and is extremely keen to be part of it.
“He is very excited about performing for our wonderful supporters. He is an ambitious player who wants to win and win at the highest level; he knows he can fulfil those ambitions with Liverpool.”
Leicester City Woos Iheanacho as Mohamed Salah Signs for Liverpool was last modified: June 23rd, 2017 by Arinze Ago