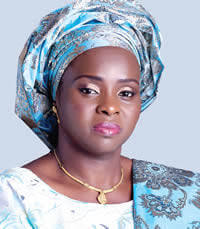 Her Excellency Deaconess Omolewa Ahmed, the Kwara State First Lady is a women leader, a doting mother and a mentor. She is a beautiful woman with good character. She is a woman who strongly believes that one is not being put in a top position just for the sake of being there but to make positive impacts in the lives of people around her. And this is exactly what she has been doing all her life, even before becoming a First Lady. It has been part and parcel of her to help the less privileged.

The adorable, and ever smiling First Lady was one of the special guests of honour at Chief (Mrs.) Folake Akanbi’s Wolimot, which was part of activities lined up for her 50th birthday celebration in Ibadan some weeks ago. And when she was asked what motivates her to do so much for the people, her answer was very straightforward, “when you treat people with kindness and compassion and make them feel important, they never forget” she says. No wonder she hit the ground running as first lady of Kwara State by founding LEAH Foundation as a means to dealing with Socio- Economic and Health issues of the generality of Kwara people. She also embarked on activities anchored on three key areas, using SHE concept: SOCIAL WELFARE, HEALTH and EDUCATION with special focus on women, youth and widows.

Through LEAH Foundation, Omolewa Ahmed has touched the lives of many, especially the aged, widows, physically challenged persons, people with health challenges, the poor and vulnerable children. Under the same foundation, there are many other initiatives through which people are benefiting like Omolewa Safe Motherhood Initiative at Alapa Cottage Hospital which recorded several births with zero mortality; adoption of 954 orphans, the Clinic on Wheels Initiative where 1.38million people have been attended to; 29 basic breast and cervical cancer screening centres and many more. Not to talk of her LEAH Charity Foundation empowerment program which cuts across the 16 local government areas of the state. The program is aimed at uplifting the standard of living of women in the state. Thousands of students in the state have had their educational needs taken care of. That is aside many orphans that have been adopted by the foundation.

All these are in line with Omolewa Ahmed’s strong conviction that ‘Life Empowered Anchors Hope’ and this is where the acronym LEAH was coined. LEAH Foundation is a Non-Governmental, Non-Religious, Non-partisan and Not-for-profit Organization, established to raise awareness and spur affirmative action on issues affecting the survival and development of women and children in particular and humanity in general, through a well-thought-out, realistic and sustainable strategy.

She complements her husband, Dr. Abdulfatah Ahmed perfectly as Governor of Kwara State and she has definitely made a great mark in humanitarian service through this foundation. According to her, being good to people is not something she stared doing yesterday. It has to do with her background, it is what she grew up seeing her parents do as a good Christian family. “The passion to help people was something I got from my background. I happen to come from a well cultured Christian family where you can’t afford to fold your arms and watch people suffering without doing anything. The zeal to touch positively is borne out of my experiences with people challenged by their situations in life.”

That is why helping people has formed part of Omolewa Ahmed’s life and she is happy for what God is using her for, which is touching lives positively.

In recognition of the wonderful jobs she is doing through her foundation, Omolewa Ahmed has won several awards which include Award of Excellence by the Association of Government General Medical and Dental Practitioners, Grand Matron of the Girls Brigade, Kwara State Chapter, National Youth Council of Nigeria Honorary Award, Chancellor Emeritus of the UNESCO Club for Global Education, Award of Excellence in child and women care by the World Brand Congress and many others.

Omolewa Yetunde Ahmed was born and bred in Ibadan, the capital city of Oyo State. She started her education at the University of Ibadan Staff School and later proceeded to Victory Nursery and Primary School where she obtained her Primary School Leaving Certificate. Her Secondary School education was at the Prestigious Saint Teresa’s College, Ibadan. She attended Kwara State Polytechnic where she obtained National Diploma in Banking & Finance and Higher National Diploma from the Kano State Polytechnic.

Omolewa Ahmed is a hardworking woman who has business interest in catering, event management and commodity trading. She is a good Christian who loves God passionately. She is selfless and genuinely caring. All her life, she has been involved in one humanitarian service or the other. Her husband’s assumption of office as Kwara State Governor in 2011 only widened the scope of her humanitarian activities as First Lady.

Oxlade-Chamberlain Will Be A Major Player At Liverpool – Klopp