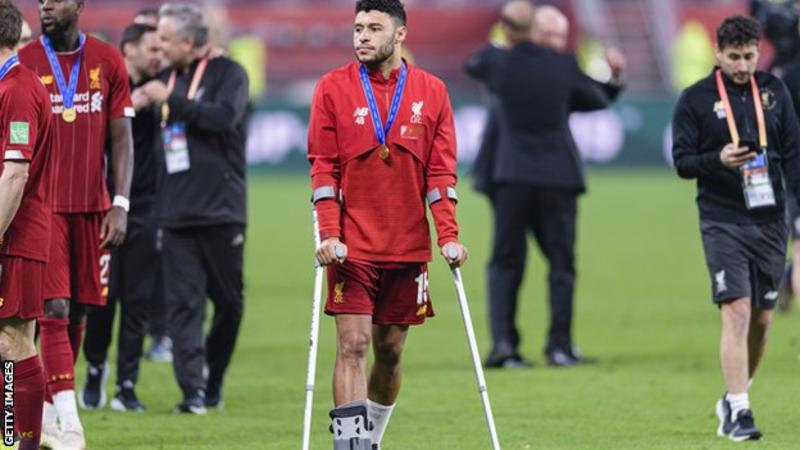 The England midfielder, 26, was forced off during Saturday’s Club World Cup final, returning later to celebrate the 1-0 victory over Flamengo on crutches.

Oxlade-Chamberlain missed almost all of the 2018-19 season with a knee injury.

“We have to see how quick it can settle,” said Klopp, whose side face second-placed Leicester on 26 December.

“It can take a while, or it can be quicker.”

Klopp said there was “no chance” Oxlade-Chamberlain could make Thursday’s match at the King Power Stadium (20:00 GMT kick-off). Liverpool then host Wolves on Sunday (16:30) in what will be their ninth game of a packed December.

The Club World Cup was the second trophy Liverpool – who are 10 points clear at the top of the Premier League with a game in hand – have won this season, after they beat Chelsea on penalties to win the Uefa Super Cup in August.

They also won last season’s Champions League with a 2-0 win over Tottenham in the final on 1 June.

“We have developed at playing in finals. You get used to the excitement and still doing the right things. We have matured,” added 52-year-old Klopp, whose side had been beaten in three finals before victory over Spurs in Madrid.

“We went there to Qatar to achieve something special. We did that, it felt brilliant. We went home, had a proper sleep and now we prepare for Leicester.”