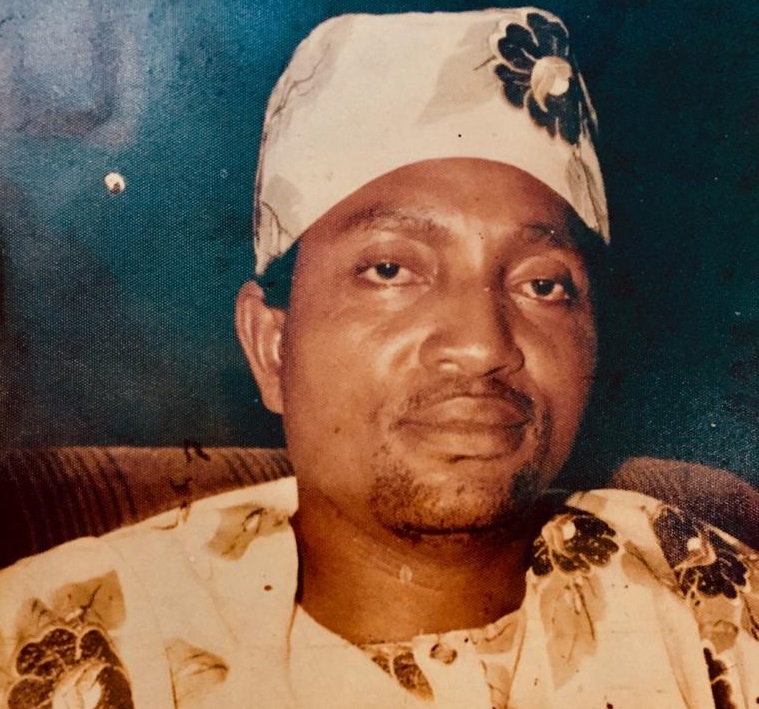 It was a convergence of all the who is who in the society from across Ogun, Oyo, Lagos states and beyond on Saturday 3rd August, 2019, in Ijebu-Ode, when London based big babe Bukky and her siblings remembered their dad in style.

The glamorous event was put together to celebrate a life well spent of late businessman and philanthropist, Chief Olanrewaju Abdulfatai Oduwole aka ‘Teru Teru’ who died some 30 years ago, at age 42.

Though the colour theme for the party was Yellow cap/head gear on White, but the immediate family of the deceased were all dressed in White & Black cap/head gear on White outfits for the Fidau prayers. It was also a different colour for the family at the reception; they wore Orange, men were in Dark Orange with Orange cap while the women rocked Light Orange with Orange head gear. That really distinguished them from the guests and also added glamour to the party.

City People Magazine’s Correspondent, DARE ADENIRAN was at the exclusive party and brings to you some of the interesting gists. Read on.

To say Chief Olanrewaju Abdulfatai Oduwole, popularly known in his lifetime as ‘Teru Teru’, lived an excemplary life will be an understatement; he was a phenomenon. Born in Ijebu-Ode, to the family of late Alhaji Nola and Alhaja Safirat Oduwole on 1st March, 1947, he started his education at Porogun Primary School, Ijebu-Ode.

After that, he attended Muslim College also in Ijebu-Ode, he was the 1962 set. He then proceeded to the prestigious Molusi College, Ijebu-Ode, for his HSC program. He later gained admission to the University of Ibadan, where he studied Agricultural Science.

He did his NYSC in Sokoto, at Talata Mafara, for a year. He came back to Lagos and worked briefly with the Lagos State Ministry of Agriculture, Ijede. He also taught briefly at his Alma mater, Molusi College. Some of his junior collegueas were Senator Gbenga Kaka, Senator Lekan Mustapha, Prince Segun Adesegun etc.

He later went back to Ijebu-Ode and set up his own business, Oduwole Fisheries, which he ran successfully till he died 4 June, 1989. He was a philanthropist per excellence; he used his wealth to touch several lives. He was a leading frozen fish importer and distributor in Nigeria in his lifetime.

Chief Lanre Oduwole left behind a loving, dependable wife, she has been holding fort since her husband’s death, at a young age of 42. Mrs. Kofoworola Oduwole is indeed a courageous woman, not many women can endure what she has endured. She was still very young when her husband died, but for love and respect for her late husband she decided not to remarry. She singlehandedly raised their 7 children to the stage they are today. What a courageous woman! She met her husband, at his cousin’s place, during Ileya celebration in 1977. She was 23 when they met, they got married in 1978. She is from Ijebu-Ode as well, born into the family of late Prince Ezekiel Adeiyi and Princess Ariola Odunlami. She is a businesswoman and a caring mother.

Apart from his many achievements as a businessman and philanthropist, another thing late Chief Oduwole was able to achieve was giving all his children a sustainable legacy, which is education. Though they were still very young when their father died; the first child of the family was in his teens but they attended best of the best schools, and their mother was able to maintain the standard even after her husband’s demise.

THE PARTY AT A GLANCE

What makes a good party? A good party must be well arranged and executed, beginning from the venue to the decoration, quality of guests etc. A good party must also have a little bit of surprises and above all, delicious food, drinks and good music. Interestingly, non of all the aforementioned themes of an excellent party lacked at the Oduwoles’ event.

The Hall, where guests were entertained at an elaborate reception, was just a walkable distance from the deceased’s residence, where Fidau Prayers was held in the morning. Apart from that, the decoration was also superb, it was a White and Yellow affairs.

Not to talk of the sitting arrangement and food menu; it was too facinating. There were all kinds of food, both local and continental dishes; Amala, Jollof and Fried rice, Chinese, Asaro, etc were available. What about finger foods? Small chops, Asun, barbecue (a whole cow was hung and prepared for that purpose).

There were also barbecue fish, roasted snails and all. Drinks were also in abundance; from assorted wines to the big brands, Hennessy, Moet etc flowed endlessly. Music was supplied by an indegenious Fuji act from Ijebu-Ode with additional support from a talented  D.J.

WHEN GUESTS WERE MOVED TO TEARS.

Virtually all guests at the reception went emotional when a brief clip, which captured the life and time of late Chief Lanre Oduwole was shown. Somewhere in the video clip, he was seen dancing to the music of King Sunny Ade at a gathering (his favourite musician), while in another he was attending to a large number of people who had visited him for one help or the other. Teru Teru’s life was such an interesting one; before 40 he was able to achieve all the necessary things of life. He was rich and famous and sociable and was able to touch many lives.

WITH LOVE FROM ROYAL GALAXY CLUB

If you want to talk about the celebrities that stole the show, give it to them,  members of Bobacunte Olu-Iwa Akile Ijebu dazzled at the party. They all looked glamorous in their different styles in Yellow with Wine & Gold headgears and expensive jeweries. They include Yeye Gunte, Yeye Basorun Shote, Yeye Oyin Ladega, Yeye Babaseye, Yeye Famijiwa, Yeye Mabadeje Eta Iyalode, Otunba Tolani Oduwole Lawal and others.

Bukola Busari-Giwa (Nee Oduwole) is one of the children of late Chief Lanre Oduwole. She is a U.K based Educationist with several years of practice. She has combined brain with beauty and character (the Oduwoles are awesome). Bukky is down-to-earth and it shows in everything she does.

That was exactly what played out at the party, as she was on her feet throughout the party, moving from one table to the other in order to make sure everything went as planned. She made sure all her guests including that of her siblings and the family were taken care of satisfactorily. She was indeed an excellent hostess at the party. Her guests include Alhaji & Alhaja Akeem Oladeni; Mr. Adebayo; Alhaji K. Soewu; Alhaji & Alhaja Owodunni and the Royal Parliament Club.

Royal Parliament Club is a well-known and respected club of young successful businessmen in Lagos. No wonder their table was the most bubbling and hottest table at the party. They stormed the party with full force and added glamour to the whole event. They are good spenders too, they sprayed higher denomination of naira notes and dollars like they were going out of circulation. They came to honour thier own, Bukky Oduwole and they a good time while the party lasted.

BETWEEN DR. YINKA ODUWOLE AND HIS GUESTS.

Though Dr. Yinka Oduwole is more of academics but he was drawn out of his shell at the party. Surprisingly, he did perfectly well, seeing to the well-being of his guests and the family generally. He is the first child of the Oduwole family and he has been playing a fatherly role all along. Thanks to his beautiful wife, Temitope too.

Like other spouses of the Oduwoles (Yewande, Tunrayo and Tunde Alade), she was there to give her support as a member of the family. They all did a wonderful job by making sure their guests were taken care of.

The Ibadan based astute banker, Alhaji Olaide Oladeji is Bukola Oduwole’s friend and brother. In fact, he has become a member of the Oduwole family. That is why ‘Mr. Fix It’ as he is popularly known in Ibadan stormed the party in a full force. Laide is well connected, his connections cut across social, business, politics and other sectors.

He knows all the who is who in Oyo State and beyond. He was not at the party with his wife alone, he came with a strong team. In his entourage were Hon. Kunle Bankole, former Chairman, Orire Local Government in Oyo State; Hon. Deji Akande’s Ex-Hon. Commissioner for Physical Planning in Oyo State; Mr. Dotun Abdul, an Oil & Gas big boy; Engr. Tayo Atilola, a Civil Engineer; Engr. Akeem Sulaimon, Asst Director of Works in Ibarapa East Local Government; Mr. Raji Bamidele, a top officerl at ICPC; Engr. Goke and many others.

MAMA ODUWOLE’S FRIENDS AT THE PARTY.

Some league of friends of late Chief Lanre Oduwole’s widow, Mrs. Kofo Oduwole were not left out of the action at the party. They all came in good number to support their sister and friend and her family as they remembered their father. They include Pastor (Dr.) Adekunle; Alhaja Taye Ajakaye; Mrs. Lydia Adewoye (JP); Prophetess Onabanjo; Mrs. Fagbohun; Prophetess Akingbesoto; Mrs. Oladele and others.