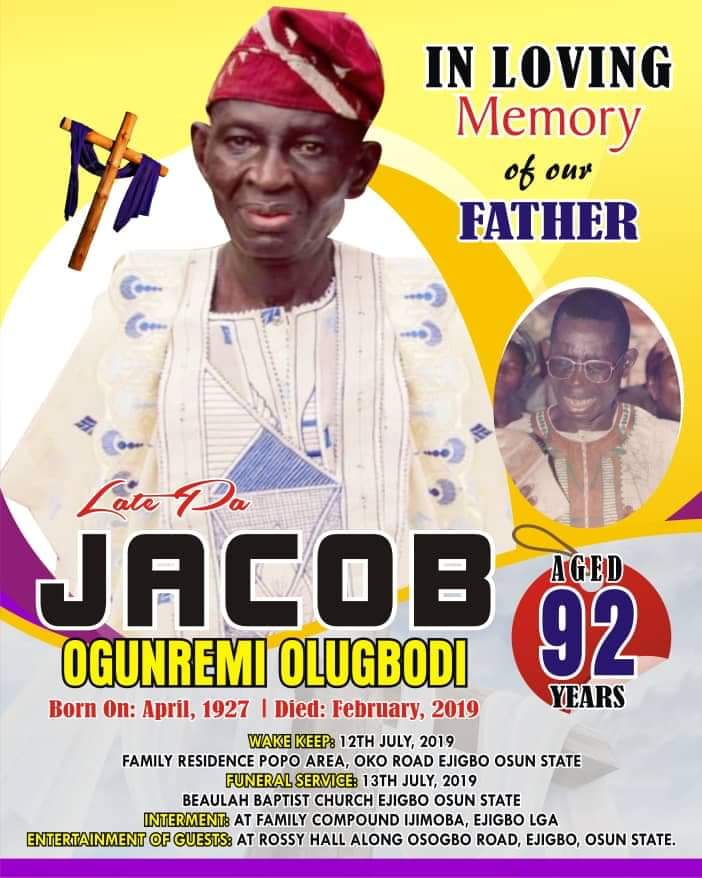 Come Friday 12th July 2019 and Saturday 13th July 2019, Ejigbo town in Osun state will come alive, as the remains of one of its illustrious sons, late Pa Jacob Ogunremi Olugbodi will be interred.

He was a great man in his life time. He died last February at the age of 92. Wake keep holds on 12th July at the family residence at Popo Area, Oko Road, Ejigbo, Osun State.

Interment will be at the family compound, ljimoba, Ejigbo area. Entertainment of guests will be at Rossy Hall, along Osogbo Road, Ejigbo.

Late Papa Olugbodi has a rich profile and pedigree.

He was born in April 1927. His grandfather migrated from the royal family in Too Alafin. His father’s name was Olayemi Olugbodi. He went o Baptist Infant school, Inishan in 1940 at the age of 13. He continued his standard school from Inishan and later at Ejigbo Baptist day school. He finished his Standard 6 at St. Peter school, Ede.

After finishing his standard school, he worked as a teacher in Inishan for 2 years. He learnt tailoring work after he stopped working as a teacher from 1952 to 1955. He worked as a tailor before furthering his education in 1955. He furthered his education to the school of Hygiene and Health Auxiliary School, Ibadan. He graduated there as a dispenser officer. He was one if the first students to graduate there.

He started working with Industrial Attachment (I.T) in Ejigbo Health Centre in 1962. He later got married to Emily Abimbola Odejide now in 1963.

He was later transferred to Ota after many years, and from there to Isundunrin, later to Isoko, to Ile-Odan and later back to Ejigbo.

He was in Ifon Osun and Ilabu when he retired as Chief Dispenser Officer. He has seven children; three boys, four girls and he has many grandchildren.

He is survived by great children, like Modupe, Yomi, Foluke, Folasade, Femi, Yemisi and Funso and many grand children.

Yeye Dupsy will be storming Nigeria this weekend with her friends to give her dad a befitting burial.