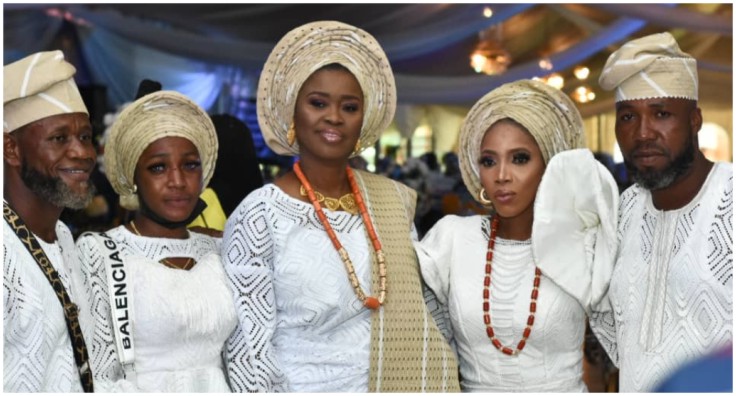 The 10 degrees event center in Oregun, Lagos received a different touch entirely on Sunday, June 20, 2021 as men of timber and caliber trooped in from all walks of life to celebrate the life of a woman of valour, Madam Tawakalitu Abebi Anifowoshe.

It was a classy event that had many talking points. Starting from the car park, we literally lost count of the exotic cars that brought guests to the event. Name one exotic and we can tell you that someone rode in it to Mama Anifowoshe’s burial party.

The beautifully decorated hall gave room for physical distancing while hand sanitisers were available at the entrance. All these and some more were the COVID-19 protocols that were strictly adhered to.

Talking about the party itself, everything needed for a proper Lagos Owambe was in excess. Talk about the food, music, guests and general entertainment, Mama’s burial party is one event that many people would like to attend again and again. City People’s DAMILARE SALAMI 08155134152 and Head of Photography Unit, Femi Adeleke were there and they bring you some hot gists and beautiful pictures, enjoy.

Madam Tawakalitu Abebi Anifowoshe was a proper Lagosian. Her father hailed from the Batula family in Idumota, Lagos while her mother was from Ilesa, in Osun State. Mama Tawakalitu was a very popular fabric merchant in Idumota, in fact, she raised all her children with the support of her husband and proceeds from the trade. She was well known by her contemporaries as one of the topmost businesswomen of her time within that circle.

Born in 1949, Mama Anifowoshe died at the ripe age of 78 in 2019 and was buried immediately according to Islamic rites but the burial party had to be delayed due to the COVID-19 pandemic.

Let’s also quicky tell you that Mama was a religious woman who doesn’t joke with her prayer time. One of her children revealed to us that she was a very likeable person and very accommodating too.

One of the trademarks of a top Lagos Owanmbe is always hinged on the quality and beauty of the Aso-Ebi. This was a beautifully designed gold and black colour combination. Let’s quickly tell you that apart from Mama’s children and their spouses, virtually everyone at the event stunned in the aso-ebi.

The most fascinating part was the different fashion styles carved out by young ladies. One would have mistaken the event for a fashion show if not for some other activities that pointed out the fact that it was Madam Tawakalitu’s burial party.

The show started with war of words and music between the MC, Wale Pumpimg and the DJ. The MC didn’t give room for any kind of boredom as he started the day on a very high note, dishing out rib cracking jokes and giving guests some awesome moments.

You already know that the Faith Music Band is always up to the task when it comes to Owanmbe and if you don’t know, let’s be the first to tell you that they are one of the most sought after music bands in Nigeria currently. They thrilled from the beginning of the party till mama called. Every guest at the event felt their music which cuts across all genres and generation. From oldies, to blues, to contemporary, highlife and Juju, the Faith Music Band gave it their all and they in return received commendations from the guests.

Hardly will you see a special Saxophone performance at a regular Naija Owanmbe party. This was one of the activities that made Mama’s burial party a very special one. One of Naija’s fast-rising saxophone players, Timi Sax was on the spotlight at the event. He was required to entertain the guests. He did a great job and the guests sprayed him some cash to express their gratitude for a job well done.

Some Nollywood veterans and superstars were also spotted at the event. They tried to come in unnoticed but it became very impossible because they caught the attention of the MC and live band who immediately spilled their arrival into the P.A. system. Some of the stars spotted include Sanni Alli, Alesh Onilegbale, Kaka Odunfa and many others.

Pastor Akin Fasawe, the founder of Wonderland Christ Assembly is a popular Lagos preacher who rarely attends public functions outside ministerial assignment. He was one of the celebrities spotted at the event. Pastor Fasawe was among those the Faith Music Band eulogised. He afterwards blessed Mama’s children before taking his leave. He started his prophetic ministrations as an evangelist almost immediately he surrendered to Christ under the prophetic cover of Christ Apostolic Church CAC Omi Adio in Ibadan.

Gorgeously dressed in sparkling white attire with a touch of brown and gold was Mama’s first daughter, Mrs Yinka Anidugbe. She opened the dance floor with her friends and family rightly behind her, giving her all the moral support she needed. She was everywhere making sure that her guests were properly catered to.

His real name is Saheed Kekere-Ekun. But everyone simply calls him Saheeto. He is often called The King of Small Chops, because of how he turned the small chops business into a goldmine. He was one of the guests of Mrs Yinka Anidugbe and a further research revealed that they had met in London some years ago. Saheeto was spotted spraying cash on Mrs Anidugbe and other guests a couple of time. The Faith Music Band also had a share of his benevolence as he sprayed them too a couple of times before finally retiring to his seat.

Mama’s second daughter, Mrs Azeezat Idowu was the next to take over the dance floor. She did in style. She came in the company of her husband, friends and well-wishers and they rocked the music ably supplied by the Faith Music Band. Was there a spray of cash too? Definitely… they also showed a high level of affluence. The music band enjoyed the show simply because they were at the receiving end of the cash spray.

He is referred to as the Olori Ebi because he is Mama’s first son. Mr Akeem Anifowoshe is popularly regarded as Mayor and he is very popular in the Agege axis of Lagos. He stormed his mother’s burial party dance floor with his wife, friends, colleagues and associates. Mayor was a hit back to back on the dance floor and even while he was amidst his friends. He was indeed the party plug for fun.

Many didn’t know that popular Nollywood actor, Taiwo Hassan also known as Ogogo would be at the event. Yes, he came without any noise and quietly joined his friends and colleagues. But then, City People’s eagle eye spotted him as he was laughing and having fun.

It was the turn of Mama’s last son, Mr Ismaila Anifowoshe to dance and his wife, many of his friends, politically ally and others stormed the dance floor with him. He could be Mama’s last son but he is not by any means the least. The dance floor was as lively as the first. Different celebrity men and women also joined him.

Before the event finally came to an end, Mama’s first child, Mrs Yinka Anidugbe was required to return to the dance floor. The reason was simple; she had more guests who requested to dance with their host. They came in their numbers showed some love to her and made the party lively till the very end.

The event wouldn’t be completely reported if the mention is not made of those who made it happen. The long list includes Saheeto Small Chops and Saheeto Catering Services, Kemabon Catering, Mr Ice Soft Drink, Amoke Ewa Aganyin, Matt Cocktail and Drinks, Omolade Catering Services, and many others.