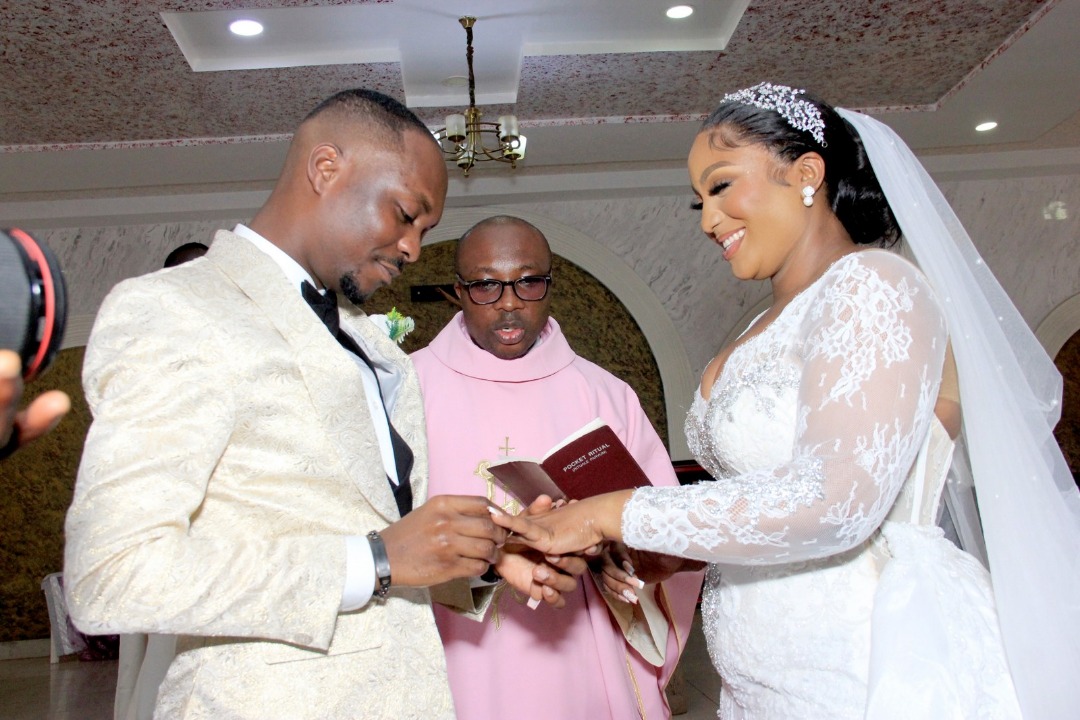 Love they say knows no bounds and true love transcends race, culture and religion. This was proven to be absolutely true as Thelma Ozowalu from the eastern part of Nigeria and Olayiwola Jegede, a proper Yoruba man took their love to the next level as they were joined in holy matrimony on Sunday, December 12, 2021, in Lagos

The Abepa of Joga Orile in Yewa North, Ogun State, Oba Adeyemi Adekeye and his beautiful wife led the dignitaries from Ogun State. Let’s quickly inform you that the Ozowalu family and the entire Igbo community were not left out of the party.

It was indeed a moment to cherish for the newest couple as they shared memorable moments on stage, all thanks to DJ Harrex who did justice to all the musical requests before two live bands took over and delivered an owambe that fully represented the typical Yoruba party as well as that of the Igbos.

Did you know that it rained cash on the couple and their parents? You don’t have to be told because whenever the son of a big society woman and a fabric merchant is getting married, you should expect nothing short of quality. All the Igbo big boys in Lagos made the reception party something very beautiful to behold as they proved their worthwhile the live band was doing its job.

Also very notable was the green colour gang. City People found out who the men and women who slay in green attires at the party were and we found out that they are friends of the groom’s mother as well as different high ranking chiefs from Joga Orile and other communities in Ogun State.

Who would not notice the Egba Diamond Sisters and the House of Love at the event? They are the two societies the groom’s mother belonged and they represented so well. They filled the church auditorium and at the reception, their tables were one of the most lively.

This report would not be complete if the mention is not made of the huge role the friends of Chief and Lolo Eddy Ozowalu played at the reception party. And also, the role of the Compere, MC Josh who had the support of the popular D1, a former Big Brother Naija housemate. Their collaboration did the magic at the reception.

It was indeed one of the best inter-tribal weddings of 2021. It was rich in culture as well defined the unity of purpose and the blessedness in the diversity of the Nigerian nation. It was a well-attended event that had all the COVID-19 protocols duly observed because the members of the Lagos State safety commission were present as well.