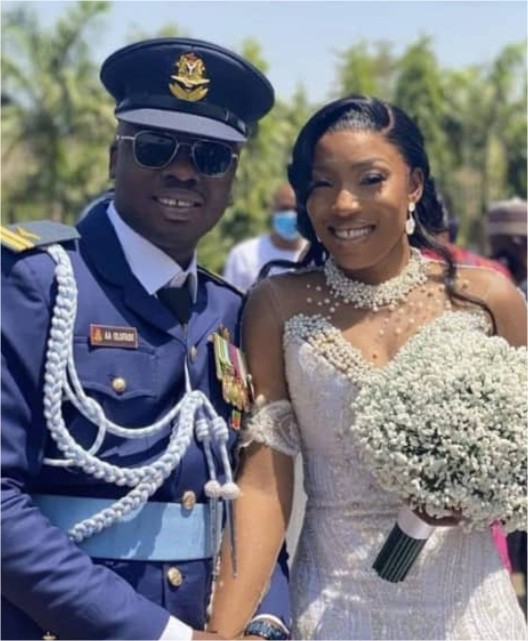 •His Pretty Wife Is 2 Months Pregnant

The entire Abuja social and Military circle was thrown into a mournful state over the weekend as many wept uncontrollably when they heard that Lt Alfred Ayodeji Olufade who got married 4 months ago was among Nigeria’s top-ranking army officers who lost their lives along with Lieutenant General Ibrahim Attahiru, the Nigeria Chief of Army Staff in the fatal plane crash that took the lives of some of Nigeria’s brightest Officers.

The tragic incident which claimed the lives of over 12 military officers on Friday was said to have occured “due to inclement weather as the plane was landing at the Kaduna International Airport”, the armed forces said in a statement. The report added that the crash “claimed the lives of 10 other officers including the crew”.

While many wept for the souls of the serving soldiers whose lives were cut short, many wept even more when they heard how heart broken Mrs Onyema Jennifer Attah is after hearing the shocking death of her darling husband.

Onyema Attah, who has been devasted since the news broke is the pretty daughter of one of Abuja’s celebrity women, Mrs Kemi Attah. Mrs Kemi Attah is one Abuja celeb woman who is also well connected. She pulled out all the who is who in Abuja for her daughter’s wedding on 17th of January, 2021. The wedding was barely 4 months old but the pretty new bride is 2 months pregnant.

While the new family is just coming to terms with the latest news of the new bride being pregnant, this incident now occured. Those who attended the wedding couldn’t even come to terms with how Onyema will cope with the tragedy. Her husband doesn’t joke with her and they shared a very strong bond together.

Those who still have the clear pictures of the classy Onions Blush and Mustand Yellow and Emerald green theme wedding with the hashtags “JandA2021” at Holy Family Catholic Church, Life Camp, Abuja haven’t stopped asking how the pretty young bride in her late 20s will cope.

The grand reception at Le Finnish Event Centre Opposite Efab Global Estate, Idu Abuja will also remain unforgettable in the memories of many who attended.

They were one couple who were madly in love with each other. They loved each other and never failed to show it to those who cared to monitor their union.

How did he leave his house the day before the unfortunate crash? A very close source revealed that it was like every other day. They parted with a kiss without knowing it was going to be his last.

READ ALSO: WHY THE IGBOS FIND IT HARD TO FORGIVE AWO!

Why The IGBOS Find It Hard To Forgive AWO!

Why I’m Staying Out Of Politics For Now – Ex-Lawmaker, OLUSEGUN OLULADE (Eleniyan)