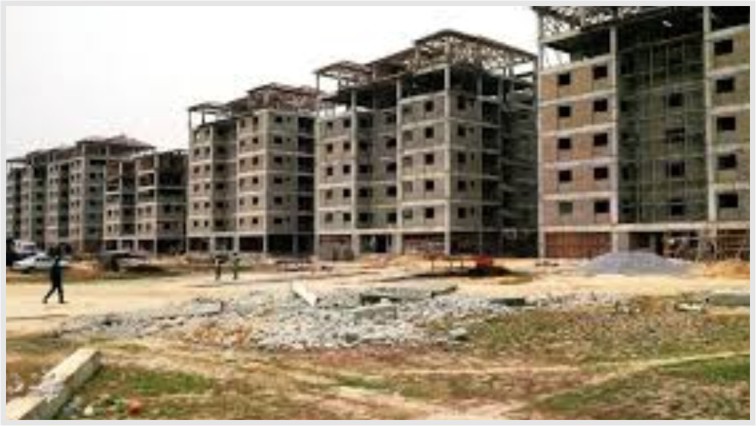 •And Developing Partner Is FIDC

Have you noticed that work is seriously going on at the popular Ilubinrin Housing Project on Lagos Island? If you drive past the construction site right now you will see activity going on, at the vast site, with workers battling to complete the 1st Phase of the project, according to the time frame. The housing project when completed will have 2 and 3 bedroom apartments, a Hotel, Restaurant, Bars, Medical Centre among other facilities.

It is like creating a brand new city within a city.

As it is, Phase 1 is selling right now, made up of Luxury studios and 2 and 3 bedroom apartments.

Driven by the urge to provide Accessible and Quality residential apartments for its citizens, the Lagos State Government has been making frantic moves for early completion of the Ilubirin Housing Project.

The move, is in line with Gov. Sanwo Olu’s commitment to transform Lagos into an ultramodern mega-metropolis through its THEME programme.

With huge Housing demands, compounded by large number of people moving to Lagos for greener pasture on a daily basis, the state is faced with the daunting task of providing shelter for a ever growing population of over 20 million people on a landmass of about 1,171.28 square kilometers.

The project, which had Cyrou Builders as the main contractors, was abandoned during the Akinwunmi Ambode led administration. It initially jump-started the scheme, through a Joint Venture agreement with private investors, who planned to inject private capitals into the project.

However, after a review of the proposals received from various companies to execute the project, the state awarded First Investment Property Company (FIDC) the contract to fulfill the vision of Ilubirin.

The new push gave fresh hope to subscribers of the public housing project being built on reclaimed land in Ikoyi Island, Lagos at the foot of the Third Mainland Bridge.

Last August, Lagos State’s Commissioner of Housing, MorufAkinderu- Fatai described the Ilubirin project as one of the several housing projects designed to transform Lagos into an ultramodern mega-metropolis.

According to him, parties in the Joint Venture between the Government and the First Investment Development Company (FIDC) have made commitment to the delivery of the project by the end of last year.

“Ilubirin Foreshore Estate is a project that is very dear to the State Government.

“Despite a myriad of initial challenges and setbacks, I am pleased to inform you that FIDC, our partner, has lived up to our expectations, and even surpassed them in designing, developing and constructing a futuristic housing project that when finished, will be the envy of luxury property developers around the world.

“Revolutionary in concept, visionary in design, and stunningly beautiful in implementation, Ilubirin Foreshore Estate is the flagship of our concept for an ultramodern metropolis which will stand head and shoulders above global capital cities as first among equals in accordance with our dream of a 21st century economy comparable to others all over the world.

“At the heart of the partnership between us and FIDC is an unbreakable bond built on trust, openness and conformity to well laid-down international standards. Our partnership with FIDC is a standard Public-Private Partnership-PPP with Lagos State providing the land and FIDC having sole authority for development, marketing and management of the Ilubirin Foreshore Estate. “Of course, we have maintained overall oversight of the project, in order to ensure that the Ilubirin Foreshore Estate is developed in line with the Masterplan for Lagos State.

“It is a plan that has at its heart an inclusive vision of excellence in public services for all Lagosians. I am pleased to inform you that FIDC has assured the state government that the Ilubirin Foreshore concept, while ultramodern and luxurious, will provide services accessible to all dear citizens of our great state”, he said.

Also speaking on the project, head of FIDC, Mr. Martin Kearns reaffirmed the commitment to deliver on time.

He also disclosed plans to construct a bridge to link the estate to the 3rd mainland bridge to ease traffic around the axis.

FIDC Project Director, Wale Bamgbelu said there is “a collective determination and commitment from both parties to the timely delivery of Ilubiri, which will set a new standard for mixed-used housing estates”.

He added: “Ilubirin will create a benchmark for future community development in Lagos State anchored on the concept of ‘live, work and play’ with not only residential offerings but also offices, shopping, new school, hotel, medical center, leisure facilities and a brand new Marina for the Lagoon”.

Bamgbelu further disclosed that a revised master plan was recently completed, stressing that this will help in optimizing the Marina and “creating a new shopping spine through the new neighborhood”.

Conceived by the Lagos State Ministry of Housing through Lagos Home Ownership Mortgage Scheme (Lagos HOMS) in 2014, it was expected to usher in a new era of affordable modern luxury in the heart of the state.

It was seen as key to mitigating the rising housing deficits in the state as it was poised to deliver 1,254, two/three-bedroom blocks of flats.

The Premier Collection slated for completion in December 2020 is pioneering, mixed-use development that caters to aspiring professionals, couples and families with amenities such as schools, offices, shopping, medical, leisure facilities and Lagoon-adjoining Marina.

The apartments are designed to cater to the city’s expanding set of aspiring professional and executive management residents. Beyond the excellent value, refined design decisions and enviable specifications are expected to establish Ilubirin’s first cache of residences as the most desirable set of homes in the city.

As the population of Lagos increases, Ilubirin offers an optimistic vision for how the city can modernise. Pragmatic urban planning makes the waterside community easily navigable. Sharp-eyed security and maintenance staff to ensure that the environment is safe and clean for inhabitants. The wetland park, which – along with landscaped gardens and lagoonside promenades on the Island – provide a necessary departure from the intensity of the city.

The 29-hectare, mixed-use development signals a new era in the lifestyle landscape of the city as an entrepreneurial, creative and cosmopolitan cohort comes to the fore.

The first units of residential apartments at Ilubirin slated for completion in the 4th Quarter of 2020, will provide smartly-appointed and luxurious homes that represent unprecedented value for money.

Ilubirin Housing Scheme, which was conceived by the Lagos State Ministry of Housing through the Lagos Home Ownership Mortgage Scheme (Lagos HOMS) in 2014, was expected to usher in a new era of affordable modern luxury in the heart of the state.

It was seen as key to mitigating the rising housing deficits in the state as it was poised to deliver 1,254, two, three bedroom blocks of flats. The project, which had Cyrou Builders as the main contractors, was abandoned for close to two years, before the Akinwunmi Ambode led administration jump-started the scheme, through a joint venture agreement with private investors, who planned to inject private capitals into the project.

Former Commissioner for Housing, Prince Gbolahan Lawal had attributed delays on the project on the need to get approval on the new proposal sent to the government. However, after a review of the proposals received from various companies to execute the project, the state awarded First Investment Property Company (FIDC) the contract to fulfill the vision of Ilubirin.

In June 2017, Profica Nigeria was appointed by FIDC to manage the construction of the state housing scheme alongside 3 other majors projects in Nigeria.

Under the agreement, the first phase of the housing scheme was billed to be completed by the end of 2018 while sales to members of the public was to commence during the first quarter of 2019. Lawal also indicated that the project was transformed into a mixed-use hub, which will create a ‘live, work, play’ environment from the initial design which would have delivered 1,254, two and three-bedroom blocks of flats.

The new design was meant to comprise 472 units of living space designed as studio apartments, 1, 2 and 3-bedroom flats, terraces and penthouses, while commercial units and recreational facilities, as well as child daycare facilities, are also included in the plan. However, the project ran into fresh challenges after Governor Akinwunmi Ambode failed bid for a second term.

Lagos State Government suggests that the Sanwo-Olu administration is comprehensibly reviewing the entire project, which may delay its earlier completion.

Confirming this development, Permanent Secretary Ministry of Housing, Mr. Wasiu Akewusola stressed that the last administration actually ceded it to Joint Venture Partnership Agreement but the present administration is reviewing that arrangement.

According to him, it is a holistic review that covers designs, contractors and funding of the project. He said: “The review is going to be holistic, in terms of designs, funding and the contractor, that is why it is taking so long and by the middle of next month a proper position will be made known.”

READ ALSO: HOW THE BRITISH PROGRAMMED NIGERIA TO FAIL –AWO

How The British Programmed NIGERIA To Fail –AWO

10 Things To Consider Before Buying Land...

Why We Partnered With LSDPC On Our...