Home News Man who clubbed expatriate with cutlass in Ikorodu, gives reason for his action
News 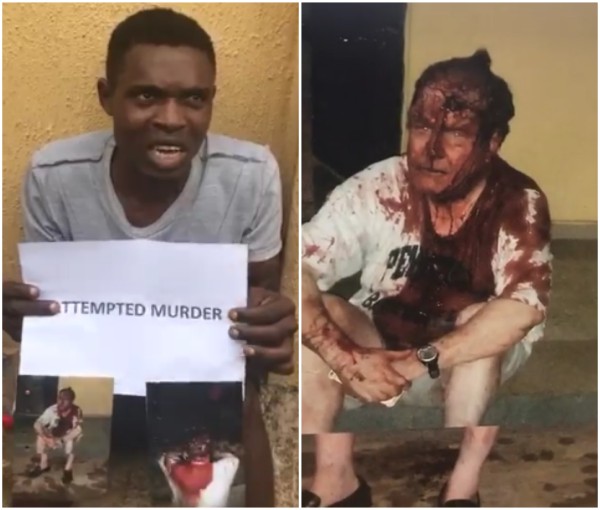 Lagos Police Command Zone 3has paraded a Nigerian man, Orabe Philips Leo who attacked a Pakistani expatriate with American citizenship who visited him but ended up getting attacked by him on the same day.

According to SP Dolapo Badmos, Orabe picked up the victim Mr Robert Rob Wheelers who once worked with him at Tony Elumelu foundation in 2015 at the airport on 25th August 2017.

The suspect who was arrested at him hideout in Ikorodu where he ran to after attacking the victim he drove to his house at Adeniyi street Ikorodu, confessed to having clubbed the victim’s head with a pestle three times because he got angry with Mr. Wheelers who went back on his promise to give him an unspecified amount of money.

“The Zone 2 command through its zonal intervention squad have arrested One Orabe Philips Leo, the suspect that attempted to kill his American visitor on 25th August 2017.

“The victim Mr Robert Rob Wheelers an American arrived Nigeria on 25th August 2017 and was picked up at the airport by the suspect who once worked with him at Tony Elumelu foundation in 2015.

“The suspect drove the victim to his house at Adeniyi street ikorodu where he was to reside till his return back to US. The victim was attacked by his host at midnight and was left in his pool of blood after which the suspect fled.

“The Zonal command received the distress call and it’s operatives were dispatched to launch a manhunt for the suspect while the victim was rushed to the hospital.

“On the 8th of September upon intelligence gathering the suspect was arrested from his hideout within Ikorodu.

“The suspect which was interrogated by the Assistant Inspector General in charge of Zone 2, AIG Ibrahim Adamu confessed to have clubbed the victim’s head with a pestle three times, stating that the victim reneged on his promise to give him an unspecified amount of money a promise the victim couldn’t keep which angered the suspect. .

“The suspect when questioned why he will have to kill a man because he refused to fulfil a promise revealed that he has invested so much in his effort to get money from the white man since he consulted a white garment church where he was given a charm to use on the man but was deeply angered when the victim didn’t obey his instructions.

“The police public relations officer in charge of Zone 2, SP Dolapo Badmos stated that investigation is on going as she stated that the AIG has directed that no stone should be left unturned in unraveling the case.”

Man who clubbed expatriate with cutlass in Ikorodu, gives reason for his action was last modified: September 12th, 2017 by Reporter